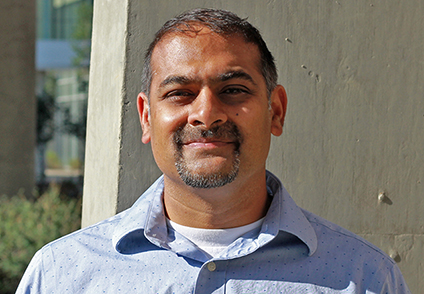 U of A pediatrics researcher Piush Mandhane led two studies that examined the effect of sleep on the ability of infants to develop cognitive and language skills.

U of A researchers find difference between children who regularly sleep more than 12 hours in a day and those who don’t.

U of A researchers have found that infants who regularly sleep less than 12 hours total over any given 24-hour period have poorer cognitive and language development at two years of age than infants who get more sleep.

Infants who sleep less may have lower cognitive and language skills by age two, but early intervention to reduce risk factors could help avoid more serious behavioural, cognitive and emotional problems down the road, new University of Alberta research has found.

In a pair of studies led by Piush Mandhane, an associate professor of pediatrics in the U of A’s Faculty of Medicine & Dentistry, researchers examined the impact of an infant’s sleep duration and disruption due to sleep-disordered breathing (SDB) on cognitive and language development at two years of age, and identified four distinct types of SDB that occur in infants, along with unique risk factors associated with each.

“Short sleep duration and symptoms of SDB ranging from snoring to sleep apnea have been associated with multiple health, learning and behavioural problems in children,” said Mandhane, who also leads the CHILD Study’s Edmonton site.

“A drop of 10 points represents nearly a full standard deviation on the cognitive scale,” Mandhane explained. “It’s quite a substantial difference.”

The researchers also found that children with persistent SDB had lower language scores, but no differences in cognitive development compared to children with no SDB. There are a few possible explanations for this finding, according to AllerGen trainee and Lisa Smithson, a postdoctoral researcher at the U of A and the study’s first author.

“One theory is that language acquisition is more sensitive to sleep disruption than cognitive development. Alternatively, the link between SDB and language delay may be the result of kids having multiple nose and ear infections, which tend to impair hearing and speech,” she said.

In the second study, Mandhane’s team analyzed data from a subset of 770 children involved in the CHILD Study.

Parents completed questionnaires regarding their child’s sleep patterns and SDB symptoms, and answered questions about daycare/location away from home, cold (rhinitis) symptoms and treatment, acid reflux symptoms and treatment, and inhaled corticosteroid use. When they were a year old, the children underwent a specialized sleep test, as well as a skin-prick test to determine allergic sensitization.

He said the findings highlight the importance of total and nighttime sleep, and demonstrate the cognitive and language problems that can occur in preschool children when sleep is disrupted.

Mandhane added that he will do a follow up study to see if sleep disruption or short sleep duration have long-term consequences on learning or behavior, and if cardiometabolic outcomes are influenced.

He noted parents who have a child who snores regularly or suffers from a constant runny nose should consult a physician.