Physics professor leads UAlberta group that designed and built the heart of a device to capture subatomic particles from the outer reaches of space. 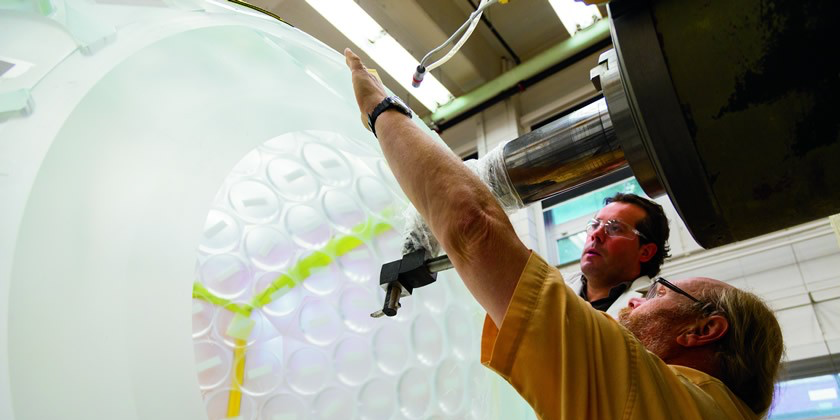 (Edmonton) This spring, scientists at SNOLAB will switch on a dark-matter detector that was designed and built at the University of Alberta.

The detector, called DEAP-3600, is located in a nickel mine outside of Sudbury, Ont. The facility is part of SNOLAB, a laboratory operated by a multi-institutional partnership that includes the U of A. DEAP-3600 is designed to capture and observe neutrinos—subatomic particles from the outer reaches of space. Neutrinos provide important clues to the nature of dark matter, which is thought to make up about 27 per cent of the known universe.

DEAP-3600 will be filled with liquid argon, a substance with which neutrinos can interact. Neutrinos are so small they pass through most material, including the human body, which is bombarded with billions of neutrinos per second.

There are actually several major components to the DEAP-3600 detector: an outer metal shell, the acrylic vessel that holds the liquid argon, the light guides that direct light into the central core of the detector, and the electronics needed to observe and record the behaviour.

Aksel Hallin, professor in the Department of Physics and Canada Research Chair in Astroparticle Physics at the U of A, says many parts of DEAP-3600 were designed or made at the U of A. (The DEAP-3600 collaboration is led by Queen’s University and includes the participation of Carleton and Laurentian universities.)

“We led the design of the acrylic vessel, then procured it and did all the machining of the vessel,” says Hallin. “We developed the process of bonding the light guides to it and purchased the material for the light guides.”

The light guides were manufactured at TRIUMF, Canada’s national laboratory for particle and nuclear physics, of which the U of A is a founding member. Hallin adds, “The electronic signal conditioning boards were designed and built at the University of Alberta and integrated with the system made at TRIUMF.”

Most recently, Hallin’s group designed and machined flow guides that will ensure the proper circulation of argon. “The simulations of the liquid argon flow guides were done here and were machined in the radon-free lab. “

Hallin says the work has to be done in a radon-free environment because radon decays quickly into radioactive elements that would interfere with the experiment’s readings of neutrinos. This is especially problematic in the mines, where the bedrock has high levels of radon: “It decays into lead-210, which has a 22-year half-life, and lead-210 decays to radioactive polonium, which has a half-life of 140 days,” says Hallin. “You can’t just wait for it to go away.” The group will transport the flow guides in a vacuum tank to protect it from radon radiation.

After the flow guides are installed, there will be more on-site testing. Members of Hallin’s group—which includes undergrads, graduate students and post-docs—will be at SNOLAB for the final preparations and the formal start of the experiment.

“We’re hoping to be online in April,” says Hallin. “We have to coat the inside of the vessel and start to calibrate it.”

The research collaboration has created a book on the construction of DEAP-3600, showing how it went from a giant ball of acrylic to a cutting-edge dark-matter detector.