How the U.S. women’s hockey team used Twitter to win their fight for pay equity

The players staged a social media master class in advancing their cause and gaining wide support. 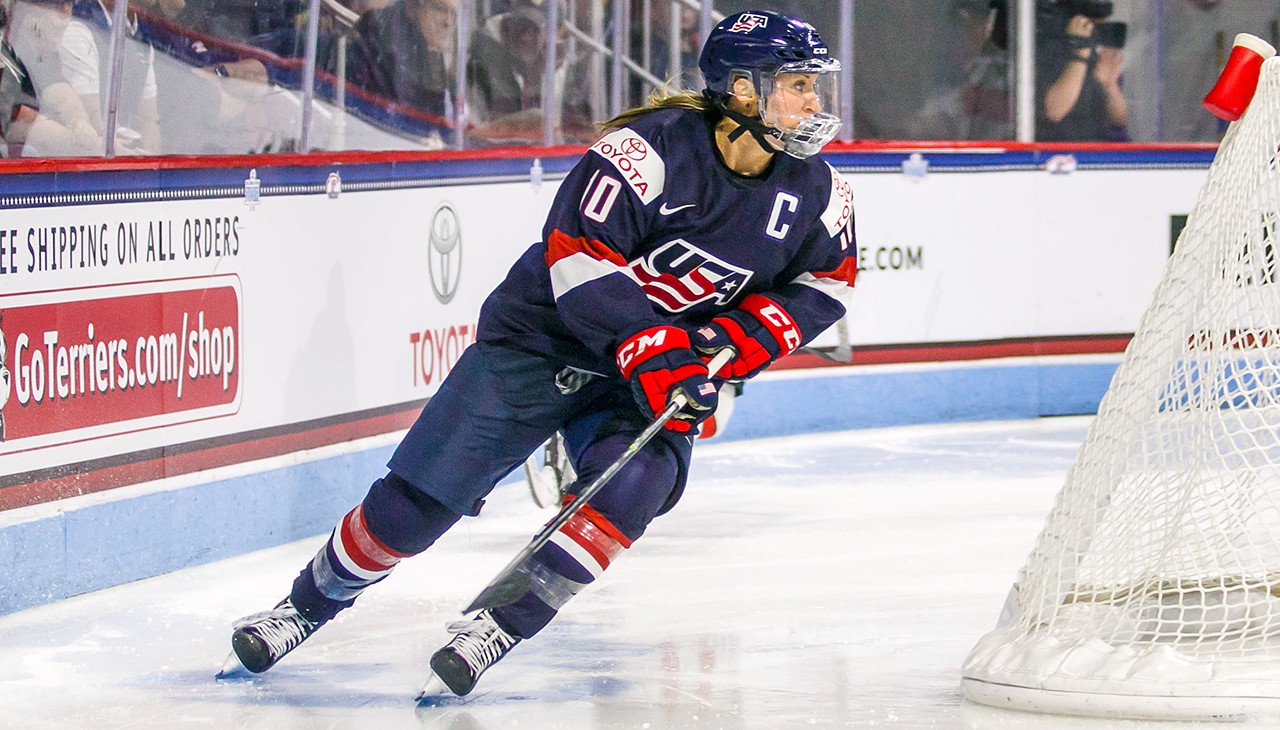 Meghan Duggan, captain of the U.S. women's hockey team, was one of the players who waged a successful Twitter campaign to lobby for equity between women and men at all levels of the sport. (Photo: BDZ Sports via Wikimedia Commons, CC BY-SA 4.0)

On March 15, 2017, players on the U.S. women’s hockey team unleashed a torrent of tweets announcing a boycott of the world championships to protest funding inequalities between the men’s and women’s program. What rolled out over the next two weeks was a master class in how to execute a social media strategy to advance your cause, according to a University of Alberta analysis.

“They were fighting for equity in terms of their treatment but equality in the general sense of the hockey world in that they should be getting paid a living wage,” said Noah Underwood, a master’s student in the Faculty of Kinesiology, Sport, and Recreation who completed the project as the recipient of the Roger S Smith Undergraduate Research Award.

And though fair pay was a big consideration in negotiations, Underwood said the players were also fighting for additional advertising and support for all levels of girls’ hockey. “It wasn’t all about them.”

The previous agreement stipulated that players earned US$6,000 every four years from USA Hockey — US$1,000 a month for the six months before every Olympics. As well, USA Hockey had no budget for elite girls’ programs while it spent US$3.5 million annually on elite boys’ programs.

After more than a year of unproductive negotiations and with just two weeks to go before the 2017 world championships, players with the U.S. women’s team announced a boycott of the tournament.

“The team calculated that since the world championships were going to be held in the U.S., this was the perfect opportunity for them to strike,” noted Underwood. “They would have a ton of leverage on USA Hockey and they would get further along in their negotiations.”

In a synchronized social media blitz, every member of the team active on Twitter posted the same messages with #BeBoldForChange, whether it was an update on the progress of negotiations, what their requests were or why they were doing this.

“They were all on the same page the entire time. There was no variation in messaging at all,” said Underwood of the campaign, which included dozens of tweets and Instagram posts over the two weeks it lasted.

“And they didn’t use the mainstream media for information dissemination to the public—they basically took it into their own hands,” he added.

Securing support from every level

However, the message wasn’t the only thing they needed to control. Underwood said the 23 players on the national team and their representatives were also able to reach out to every level of elite women’s hockey to get them on board.

“When USA Hockey heard about the strike action, they immediately tried to get a scab team together, but the women’s team were way ahead of them,” he said. “They completely struck out USA Hockey.”

All told, hundreds of female hockey players stood in solidarity vowing not to join a scab team.

“While a shot at playing for a national title or even in the Olympics seems tempting, women hockey players were basically saying, ‘Getting equality across the board is more important for our sport,’” said Underwood.

This demand for funding for all levels of the women’s game, according to Underwood, was the key to why the backlash from the general public was kept to a minimum.

“The public believed the players were fighting to change the entire system,” he said.

Underwood added the team’s heavy use of American iconography, such as the flag, in their social media campaign also helped stem the tide of public opinion during a time in the U.S. when work action is looked down upon.

“They didn’t want to sow any sort of discourse among their potential supporters, which is very different from other athlete protests that have happened. We thought that was a very deliberate attempt by them and another reason the public probably didn’t turn on them as they had Colin Kaepernick and other athletes,” he said.

The final tactic Underwood and his project supervisor Judy Davidson noticed was the team’s use of photos of themselves holding signs describing what their fellow teammates and the boycott meant to them.

In this show of solidarity, Underwood said the outfits the women chose were either plain or athletic in nature.

“Unlike the majority of mainstream media’s representation of female athletes, the photos were not heavily sexualized or about their looks. It was all about playing for each other. It seemed as if they were trying to emulate the typical adjectives used to depict male athletes,” he said.

With two days before the puck was to drop on the world championships, USA Hockey blinked.

The players secured a four-year deal that increased their salaries to about US$70,000 a year and gave them the chance to win performance bonuses based on their results at the world championships and the Olympics.

As part of the deal, USA Hockey guaranteed that each player on the national team, regardless of experience level, would receive a monthly training stipend of US$2,000. USA Hockey would also provide the same travel arrangements  and insurance coverage to the women’s team as it does to the men’s team.

USA Hockey and the national team also established a committee focused on improving the promotion and organization of the women’s game, and added a foundation position to improve fundraising efforts for the elite girls’ programs.

With the off-ice distractions taken care of, the U.S. women made good on their contracts and beat Team Canada 3-2 in overtime to win the 2017 world championships, then followed it up with a gold at the 2018 Olympic Games.

“I’m not sure you can draw a straight line from their agreement to them winning these tournaments, but it is good for the narrative,” said Underwood.

How the U.S. women’s hockey team used Twitter to win their fight for pay equity