There’s no magic formula to breaking into the fledgling cannabis industry—but ask Stephanie Lunn and she’ll tell you everything will work out just fine. 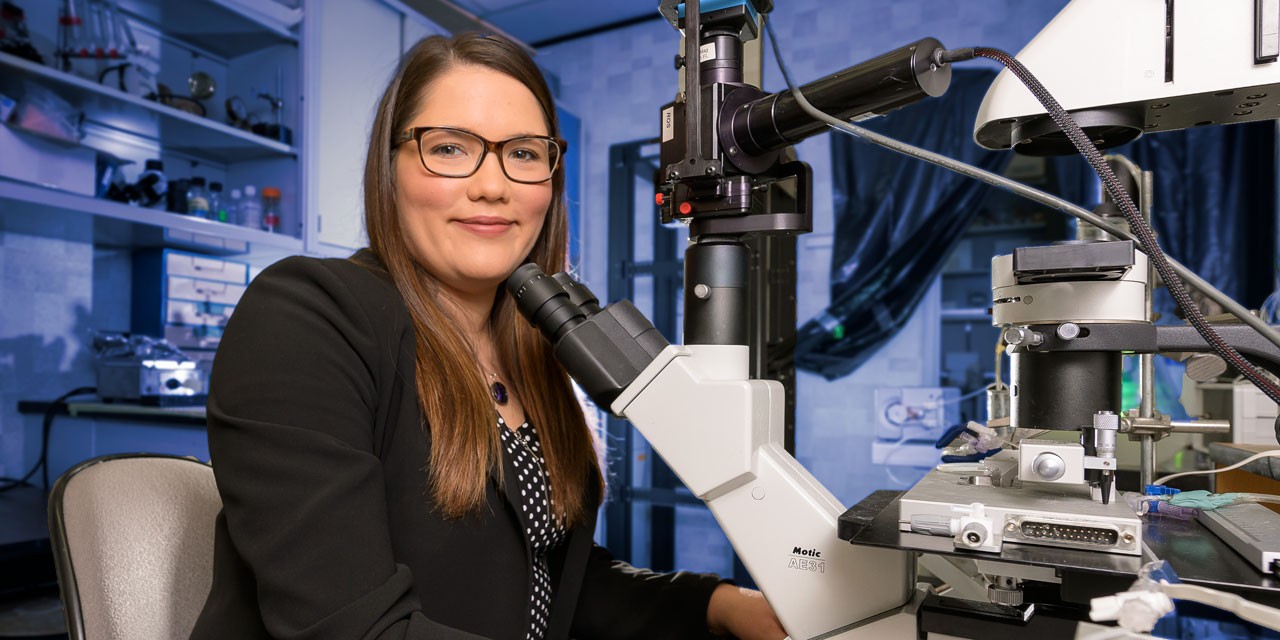 Stephanie Lunn landed a research specialist job at Aurora Cannabis just two months after completing her PhD in pharmacology at the U of A. (Photo: Richard Siemens)

“It’ll happen.” Stephanie Lunn was sick and tired of hearing the glib phrase in response to “How do I get a job out of grad school?” from experienced mentors and staff at numerous career fairs she attended while earning her BSc in the pharmacology specialization program (2013) and then her PhD.

“It really bugged me when people would say that. How is that helpful? I needed an outline, step one, step two, etc.”

Alas, the PhD graduate—who in fact landed a fantastic research specialist job at a leading Canadian medical cannabis licensed producer just two months after completing her PhD—tells anyone who is panicked about breaking into the pharmaceutical industry, “It’ll happen.

“Turns out it’s true! It will happen with patience and perseverance,” said Lunn, adding that she never had a concrete idea of what she wanted to do, “I just knew that I wanted this PhD and somehow I would find a job.”

That blind faith guided the Calgarian to break expectations of following in her entrepreneurial business-minded parents’ footsteps, and apply to the University of Alberta BSc after discovering a love of biology in Grade 12.

While studying her first year in Edmonton, she quickly realized how difficult it was to get into medicine, and chose a field that held decent job prospects and interested her—the specialization in pharmacology.

Fast-forward to graduation in 2013, not entirely divested of her med school dream, she wrote the MCAT, applied to the University of Calgary’s medicine program and took a job that summer in U of A associate professor Frances Plane’s lab studying blood vessel function.

“When I didn’t get into med school, she offered me a master’s spot.

“I thought at the time, ‘OK, I’ll just reapply to med school after my master’s,’ but just three months in, I knew I didn’t want that and that I would continue on to get my PhD.”

Not only did Lunn love the problem-solving aspect of science, she’d also become best friends with a lab partner and loved the environment of Plane’s lab.

“The culture was a fit, and I just knew this is what I am supposed to do.”

Lunn said in addition to gaining a tremendous amount of hard science skills, she also gained soft skills over the years, from writing to critical analysis to leadership. She was also strongly encouraged by Plane, by then a mentor as well as supervisor, to create her own professional development, hence Lunn’s role as president of the Pharmacology Graduate Students’ Association for 16 months.

“As well as excelling in her research work,” noted Plane, “Stephanie actively pursued opportunities to develop skills in other areas such as communication, team-building and organization, through leadership roles in the Pharmacology Graduate Students’ Association, mentoring of undergraduate project students and undertaking an internship in the Research Ethics Office through the Sustainability Scholars program.

“This combination of a strong track record in research, together with evidence of experience in these other areas, provided her with an excellent resumé to present to employers.”

Of course, as graduation neared and the sleepless experience of preparing for her PhD defence loomed, Lunn was still actively seeking out how best to land a job and hearing the words, “It’ll happen.”

In her second and third years, she’d thought she maybe wanted to stay in academia, but joining the pharmaceutical industry or becoming a medical writer became bigger draws.

“I like a lot of things and never wanted to limit myself in a job. I like mentoring and teaching, being a leader, and I’m opinionated so I knew I was not going to be a cog,” she said.

She applied for jobs all over the world related to her skills, which are “anything clinical trial related, clinical trial management, or working at a clinical research organization, any entry-level management of research at universities or pharmaceutical industry positions.

“There was a job posted for a while at Aurora Cannabis. Not many pharmaceutical companies are doing research in Canada, and here was one in Edmonton, in an exciting new field.”

She applied before her PhD defence and again after successfully defending it, and landed an interview that went well, but didn’t hear anything for six weeks. When she finally got the email offer, she said, “I nearly fell over, I was so excited.”

While she can’t get detailed about her work at Aurora, she says the team-oriented culture is amazing, she has an awesome supervisor and her work as a research specialist —reading and analyzing scientific literature on cannabis to support business decision-making among various teams—is exactly what she wants to be doing.

“When I look back over the years, how I chose pharmacology, and finding such a great lab to grow in, things really do just happen.”