How to break the language barrier of aphasia

UAlberta expert explains a misunderstood condition that affects 350,000 Canadians, and offers three ways to communicate with someone who has it. 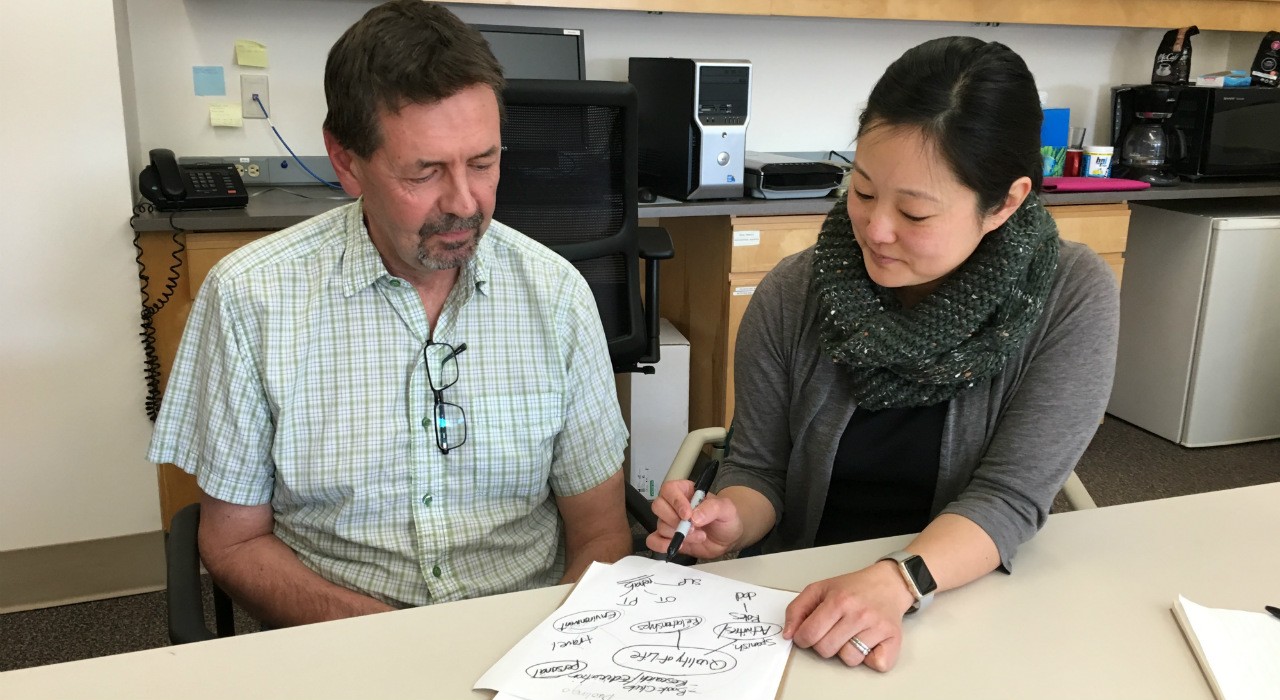 Rob Nelson (left) uses written cues by researcher Esther Kim to help understand what she is saying. Nelson developed aphasia after suffering a stroke 16 years ago, and is now doing well after years of therapy. He encourages others with aphasia to live life fully, which Kim says is important in coping with the condition. (Photo: Bev Betkowski)

Rob Nelson has just three little words for people who’ve lost their own ability to read, write or speak: “Don’t give up.”

A stroke suffered 16 years ago, when he was 45, left Nelson with aphasia, a condition that alters the ability to speak and to understand written and spoken words. He was barely able to speak, managing only ‘yes’ and ‘no’. He couldn’t read, do math or spell. “My brain was a mess.”

Today, after years of therapy, he talks with only a faint hitch in his speech, reads reasonably well and is even slowly learning Spanish. He’s determined to not let his aphasia get in the way of living life, something that’s important when navigating the condition, said Esther Kim, a professor in the University of Alberta Faculty of Rehabilitation Medicine.

Regardless of their language abilities, it’s important that people with aphasia continue to live full lives, Kim said. “Don’t let it stop you. Go out to eat, interact with others. You shouldn’t sit in the house and not live your life.”

The condition affects up to 350,000 Canadians and two to four million Americans. Aphasia is most commonly caused by stroke, and the number of people grappling with it is likely to rise as our population ages, Kim believes; 80 percent of strokes occur in people 60 and older, according to the Heart and Stroke Foundation. It can also be an after-effect of a traumatic injury, like a blow to the left side of the head, a serious wound, or even part of dementia.

Depending on where the damage has occurred in the brain, there can be “pockets of ability” that leave people with mixed skills, for instance, able to write reasonably well, but speak haltingly. While some people fully recover their language skills, more often than not, they’ll be left with some difficulties. “It’s likely some degree of aphasia will be with that person for the rest of their life,” Kim said.

After his stroke, Nelson was diagnosed with non-fluent aphasia, which results in slow, telegraphic speech. He chooses and uses the most important content words and leaves out filler words that would round out a complete sentence.

“Small words mess me up.”

The other type, fluent aphasia, means a person can speak easily, but the language is a garbled “word salad”, Kim said. “The words don’t come out how they want them to. They understand what they want to say, they just can’t say it.”

“The way we demonstrate our intelligence is by speaking, and people with aphasia speak slowly. So people tend to assume they have compromised intelligence, which is wrong. They just have trouble getting the words out. People are still who they always were.”

Because of the language barrier, frustration and depression often go hand-in-hand with aphasia, she noted.

“Often people with aphasia lose their social network because they can’t talk that well, and that’s how most of us socialize. People diagnosed with aphasia tend to have lower quality of life because the communication barrier is so pervasive.”

Nelson, whose right arm and leg were also weakened by the stroke, says he has bad days and good days when it comes to coping. “I still get frustrated with it.”

But, he keeps going. Besides being dad to a 12-year-old daughter, Nelson maintains a small circle of friends, bicycles 800 to 900 kilometres a year, continues a favorite pastime of camping and has travelled the globe.

He encourages others with aphasia to be persistent in enjoying life however they want. “It’s easier to give up, (but it’s) better I didn’t give up.”

Kim suggests a few ways to better communicate around aphasia:

People with aphasia need to be patient with themselves as they try to communicate. “Sometimes they’ll be trying to get something across and just give up,” Kim said. “Try not to be discouraged, and think of other ways to get your message across. Can you write it, or give a gesture? Or describe it another way?”

Even if they can't think of what the right word is, by providing some clues (e.g., "it's like...") their listener can sometimes figure it out.

The person at the other end of the conversation also needs to be patient, she added. “People with aphasia need more time to comprehend what is being said and more time to get their message out. We are naturally uncomfortable with silences, but wait longer before you jump in and finish their sentences for them.”

Nelson also advises people to speak slowly, which can help the person with aphasia comprehend the conversation.

Use different ways to communicate.

Talking isn’t the only way to converse. Gestures and writing are also useful.

“If the person with aphasia looks confused by what you’re saying, use a pen and paper and write down key concept words,” said Kim, adding some of her patients carry notepads and pens with them. “If, for instance, you want to tell them about a place you visited, write down the name of the place and point to yourself.” People can also carry wallet cards that explain they have aphasia or access other communication options at Aphasia.org, Kim suggested.

Be polite, but not dismissive.

It’s tempting to just smile and nod at someone with aphasia who is struggling to communicate, but it can seem dismissive. “It’s important to verify what you think they are saying. By verifying their message, instead of glossing over any misunderstandings, it acknowledges they are competent individuals. Put in the work to try having that conversation with that person or understanding what message they are trying to convey.”

This means being honest in telling the person you’re having difficulty understanding them. “It’s OK to acknowledge when the communications breakdown happens.” Offer to write down suggestions or illustrations of what they might be trying to say, or if necessary, agree to take a break and try again.

How to break the language barrier of aphasia