How to enjoy holiday eating without the guilt

Seasonal favourites make it easy to overindulge. Try these tips from a U of A registered dietitian to make your festive menu healthier without sacrificing flavour. 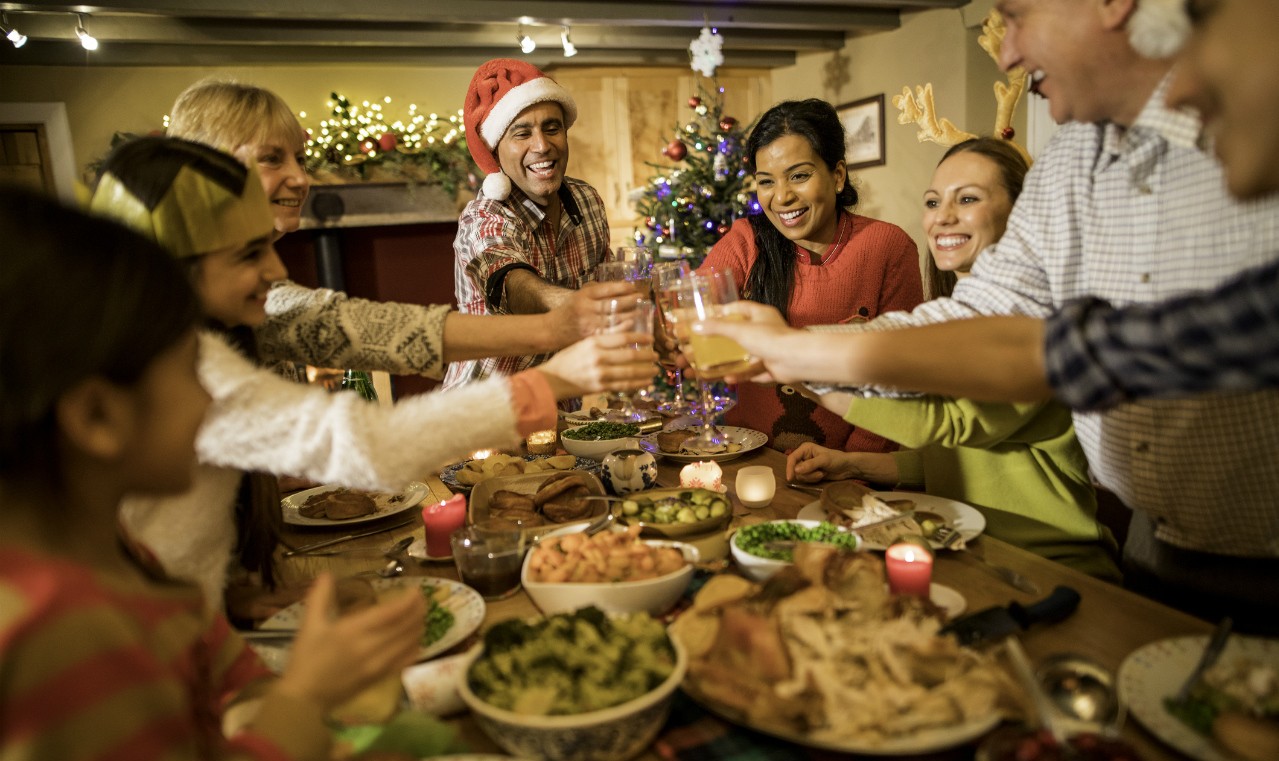 Holiday feasting can pile on the extra calories, but planning ahead, controlling portions and substituting healthier versions of traditional treats can help you avoid overindulging, says a U of A dietitian. (Photo: Getty Images)

Eat, drink and be merry this holiday season, but to avoid a Santa belly, keep an eye on the calorie count.

Seasonal goodies make it easy to overindulge during the feasting that occurs during the holidays. And that means a pileup of calories can take the waistline by surprise, said University of Alberta registered dietitian Sabina Valentine.

“The problem with this time of year is there are many more indulgences available, and those extras can really increase the calorie count,” Valentine said.

For example, a couple of shortbread cookies can add up to 250 calories or a piece of mince pie can set you back 500 calories.

“It’s a tough time of year. It’s all too easy to placate yourself by eating all these yummy foods and drinks because they numb the stress, but it’s not a good way to deal with it over the longer term. The next day, you wake up and remember all the things you still have to do.”

Instead of eating those feelings, throw a dash of exercise into the mix, Valentine suggested.

“It’s hard to find the time to exercise, but combine it with your daily routine. Park farther from the shopping mall, jog or bike to the grocery store, or plan a Christmas party around an outdoor activity like tobogganing or skating. Staying active is a good stress reliever.”

It’s also smart to have a plan at the table, she advised.

“Try to pick and choose your extra calories—do you want gravy or cranberry sauce? Or if you want both, just have a tablespoon of each. Set a limit on how much you’re going to have. And practise the 80/20 rule—eat sensibly 80 per cent of the time and indulge in goodies the other 20 per cent.”

There are also ways to lower the calorie count on favourite holiday foods by keeping these tips in mind.

The centrepiece of many holiday meals, even a few slices of these meats can pack a punch, with three ounces of white turkey meat weighing in at 125 calories, ham at 140 calories and dark meat at 147 calories. Anyone with high blood pressure may want to avoid ham, which is high in sodium, and if turkey is on the menu, cut the fat content by removing the skin.

The silky finishing touch to a mound of mashed potatoes, gravy can be up to 170 calories per cup, so avoid using the meat drippings and instead use the brown bits from the bottom of the pan to add flavour. Use low-sodium broth and thicken it by adding pureed carrots instead of flour.

The heavy hitters on the festive plate, these starches can be lightened up. First, said Valentine, avoid using boxed, store-bought stuffing, which contains white bread. Instead try homemade using high-fibre options like whole wheat bread, brown or wild rice or quinoa, flavoured with nuts, dried fruit or diced veggies. “Fibre helps us feel full, and we don’t absorb as many calories.”

Instead of softening mashed potatoes with fatty cream cheese, sour cream, cream or butter, reach for buttermilk or milk. Yams, the spud’s bright orange cousins, are a slightly healthier option, rich in fibre and the antioxidant beta carotene. Keep the calorie count low by skipping or using just a bit of brown sugar or butter for extra taste.

Done right, these are the most guilt-free dishes on the table. One cup of turnips or green beans has just 30 calories, for instance.

“They fill you up and provide lots of nutrients. What matters is how you cook it,” Valentine said. Traditionally made with canned soups and lots of gooey cheese, casseroles can be lightened up with sodium-free chicken broth, wild or brown rice, brown bread crumbs and low-fat cheddar cheese.

A holiday classic that really isn’t eaten any other time of the year, this bright, tart jewel is hard to pass up. If you’re buying it, get the canned unsweetened version, and if homemade is on the menu, add just enough sugar to make the sour berries edible. And since one cup is 300 to 400 calories, “Have a tablespoon or two, but don’t go crazy.”

“None of them are going to be super-healthy, but moderation is the key to enjoying them,” Valentine said. That means limiting your intake of goodies like mince pie, which averages 500 calories per piece, to every few days—not every day. Or have a half-slice of your favourite treat. Home bakers can experiment (Valentine advises doing a trial bake first) with applesauce instead of butter or oil, reduced sugar, and substituting whole wheat flour for white.

It’s not a party without nibblies like cheese and crackers or deep-fried delicacies. But as a host or a guest bringing a platter, it’s easy to have lighter options, like whole-grain crackers. “And try to use other foods that are better, like fruit and veggie platters, fresh spring rolls, even sushi.”

Keep the wine, rum and eggnog to a minimum, or sip instead on diet cranberry drinks or soda. “Set a limit for how much you plan to drink for that evening or during dinner.”

To avoid overeating at a party, watch portion sizes, she advised. “Have a smaller plate and fill it with small servings. Before you have seconds, wait 15 to 20 minutes. It takes that long for your stomach to tell your brain when you’re full. Listen to your body’s cues, and if you’re not hungry anymore, don’t eat. At that point, it’s more about wanting it than needing it.” If the temptation is there, walk away from the food and enjoy the Christmas tree or join a conversation.

“After all, this is the time of year to enjoy all the lovely things associated with Christmas, like family and friends, like gifts, like the downtime you have.”

How to enjoy holiday eating without the guilt