How to learn anything—including writing a convocation profile

Inspired by psychology grad and 52skillz YouTuber Stephen Robinson, we present how to write an interesting convocation profile. 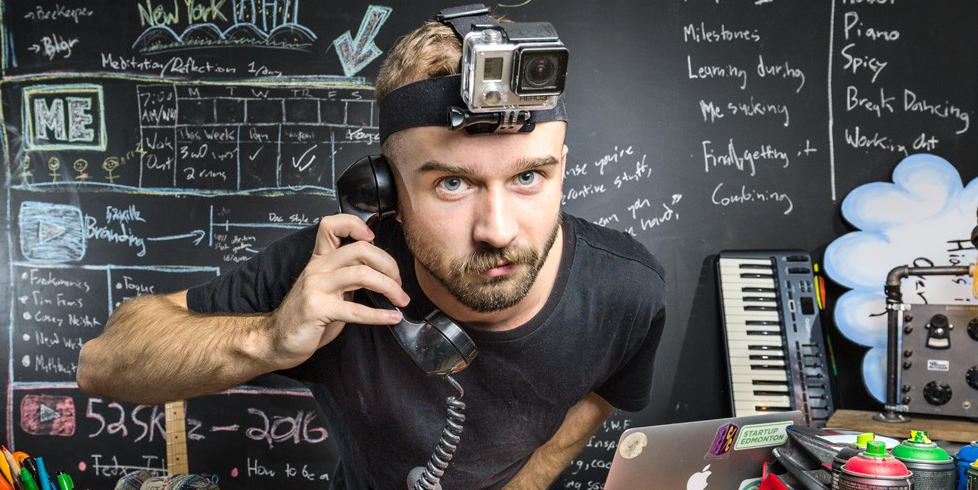 From Rubik's Cubes to a Rube Goldberg contraption, Stephen Robinson has amassed an impressive array of paraphernalia on the way to learning a new skill every week. (Photo: Richard Siemens)

Look at all those graduands, smiling and posing for selfies in their convocation finery. They did it. They finally did it!

Convocation is the end of one journey and start of another, and every grad has a story to tell. Sharing the best stories is a privilege and fun, but it’s also a lot of work.

Step 1. Find a grad with a cool story.

Sure, the University of Alberta is crawling with smart, talented students. But talent alone doesn’t make a story compelling, at least for folks not named Mom or Dad.

You have to keep your eyes and ears open for story leads and that means talking to colleagues or professors, and generally taking note of interesting stuff on the news or social media. Or in the case of psychology grad Stephen Robinson, check out YouTube.

Robinson is the creator of 52skillz, which sees him learn a new skill every week on camera. Since launching his YouTube channel two years ago, Robinson has learned—and indirectly taught—dozens of skills, including:

The last item in that list explains the origins of 52skillz as a creative response to Robinson’s near-burnout after struggling to balance academics and running a business.

“I had put myself in a situation where I was spending the majority of my time maintaining my lifestyle and maintaining the expectations of other people instead of following up on what I wanted to do, and living,” he explains in his TEDx talk, The Curious Person’s Guide to Learning Anything.

Step 2. Do the interview.

It’s impossible to write about a grad’s life—or chunk of it—without understanding what makes them tick. Interview prep is key, and Robinson’s videos are a logical place to start.

They’re quirky and fun, but they also show a sincere passion for learning. The first video, originally posted to his Facebook, is a quick and dirty setup of him moonwalking while playing “Happy Birthday” on the guitar (which he did to impress a girl—a strong motivating force throughout the series).

“I told all the girls I had crushes on at the time that I was doing this thing. All my friends and these girls thought it was just impressive, so I decided it to actually follow through with it,” he said.

The interview process uncovers interesting tidbits about a person. For instance, Robinson grew up near Westlock, the son of Barry, who has a PhD in cow nutrition (and appears in How to cook a steak) and Lorraine, whose background is in zoology. He has a twin brother, Michael, who studied engineering. His other brother, Lindsay, is in film production (more on that later).

Though he too was interested in science, Robinson followed his own path and interests in people.

“I knew that was something I was interested in, but I honestly had no idea. I just wanted to go to the U of A and take as big a variety of classes as I could to see what interested me. Thankfully, psychology ended up being the thing I wanted to do.”

That interest in people comes through in Robinson’s video and public speaking appearances, but so does his entrepreneurial spirit. He was actively involved with eHUB, the U of A’s entrepreneurship program, and ran a college painting franchise during his second year of studies. Running the business nearly caused his burnout, but he also gained a lot more.

“A huge thing that was drilled into me during my College Pro experience was, if you want to hit a goal and you want to make things happen, you need to create measurable goals around that, you need to set a date around it … and then create accountability.”

Is a how-to article the right way to tell a student story? It’s a bit out of the norm, so it’s a decision that requires careful consideration. Or, take a page from Robinson and just start typing.

Commitment and good old-fashioned Alberta stick-with-it-ness have allowed the 23-year-old to amass more than one million YouTube views, which is especially impressive when you consider he knew nothing about video production at the start.

“The hardest part of any project, or even committing to going to university, is just doing it and getting that first video out there,” Robinson said. “My fear of disappointing people and not following through with what I committed to do was high.”

Many of the videos he’s made wouldn’t have happened if not for Robinson’s ability to connect with people. Friends often taught him skills (How to drift in super shitty cars) but he also had no problem asking complete strangers for free help (How to do a barrel roll in a plane).

“I was talking to a friend of mine and told him I’d really love to fly a plane for one of the skills. He was like, ‘Ooh! I know a guy who may be able to help you.’ I was talking to that guy on the phone and he was like, ‘I can do you one better. I can teach you to do a barrel roll in a plane.’”

Robinson headed down to Boulder, Col., where the pilot lives and spent about 45 minutes in the air.

“It was awesome. I was with the guy in a training plane—it wasn’t me flying it and landing it. It was super easy.”

Other skills required more time investment. Nailing the Rube Goldberg machine was a two-month process. Even juggling took a while to master.

“It took me about a week and a half to get that down. Which I’m not proud of, to be honest.”

This story is going to have a happy ending. You know it and the readers know it, but how to get there? Writing about the videos of Robinson hotwiring a car or avoiding prison in Bolivia probably aren’t the way. Focus on the future instead.

Robinson has leveraged everything he’s learned from 52skillz into a new web series, How to Learn Anything, which is sponsored by TELUS’s Storyhive, a funding program for content creators. It’s essentially “52skillz on steroids,” he says, with improved production standards thanks to the help of brother Lindsay.

His first feat? How to solve the Rubik’s Cube—while skydiving. Other videos in the six-part series will see Robinson breakdance atop Mount Rainier and build a robot capable of baking a cake using a Depression-era recipe.

“I had three months to do the Rubik’s Cube skydive thing. We have five months to do all five [remaining]. We set the bar very, very high with the first one and we want to continue to raise that bar.”

That drive to excel has defined Robinson’s development since that initial “Happy Birthday” moonwalk. And most of that growth has happened off camera, “below the iceberg,” he said, whether that’s planning a new video or giving a public talk.

“Even if 52skillz and How to Learn Anything doesn’t turn into this huge thing that millions of people are watching and care about, I know I can look back on this experience and say that I got to spend several years of my life growing myself and creating really cool stuff and being creative.”

How to learn anything—including writing a convocation profile
Newsroom