The dream began with a taste of grasshopper; now Camola bakery is offering a sustainable baked goods alternative to Albertans. 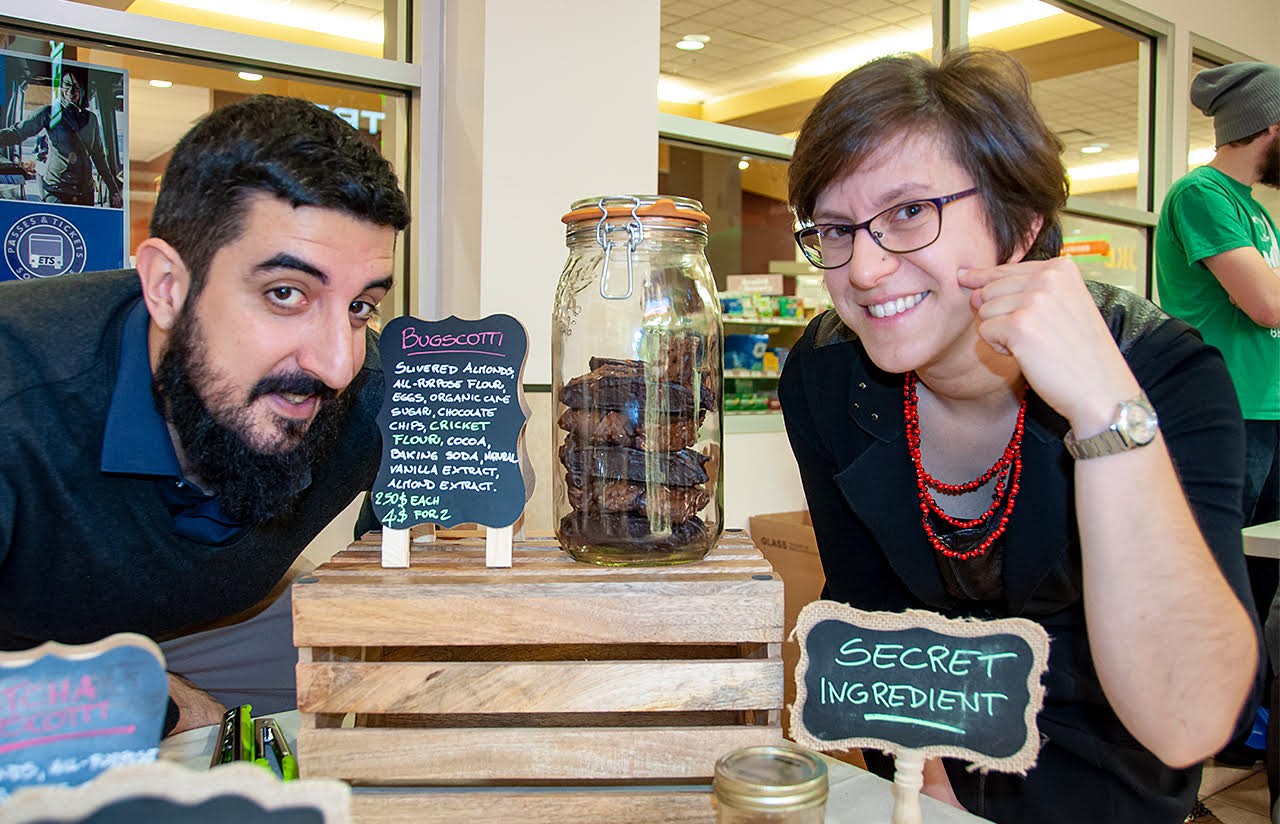 And they’re betting personal time and energy, from designing recipes to baking and sampling at farmers’ markets, that locals will indeed bite and get hooked on their delicious, eco-friendly baked goods.

“We’re already in a good position because eating insects as an alternative to meat is not a brand new concept to most Canadians. But it’s still one that takes some education, especially if we’re going to be out ahead of the market,” said Ronzani.

The couple from the Faculty of Agricultural, Life and Environmental Sciences is eyeing the slow but sure rise of competitors who also recognize the potential market growth for insect-based foods among increasingly healthy and green-minded North Americans.

According to industry reports, the edible insect market was valued at US$33 million in 2015, and is expected to grow globally by 40 per cent by 2023. And though North America sports quite a few insect-based products in its natural foods stores, according to Branko Jankovic, a project manager at the Agriculture & Food Council of Alberta, Edmontonians—and indeed Canadians—are slower to the uptake.

The question is, can Camola entice enough locals to build up a name for itself quickly enough?

“Our message has changed since we started in May” said La Rocca. “We now focus on the most important part that will lead us to success, educating the public about the benefits of edible insects.”

Every weekend you’ll find Ronzani and La Rocca at local farmers’ markets offering free samples of their baked treats for sale, which may include cricket granola bars, sourdough breads, pizzas and “Bugscotti.”

“I saw the potential the first time I tasted a grasshopper,” explained La Rocca. “It tasted pretty good. With our background in environmental sciences, we knew that insect production for consumption had a fraction of the impact of other livestock sources of protein.”

Looking at supermarket shelves loaded with high-protein foods, and seeing so few were insect-based, they realized there was an opening in the market to take their learning beyond the academic and into the real world, where small choices—such as choosing to buy a loaf of Camola bread—can add up to a big impact on the environment.

“Eating foods made with cricket flour isn’t just a sustainable choice, it’s also healthy,” added La Rocca. “A tablespoon of cricket flour gives you 100 per cent of your vitamin B12 for the day.”

After considering various food categories for their venture, the couple quickly decided on a bakery because of Ronzani’s passion for baking.

Next, they worked with a professional recipe developer to perfect their array of products, which Ronzani continues to improve in their home kitchen every day.

“We knew if we could get the public to try our product, they would be won over on taste. It does have a different taste but it’s delicious,” added La Rocca. “When used with sweet ingredients, it has a nutty, almost chocolatey flavour. When used in more savoury items, like our bread or pizza, it has an umami-like taste.”

Since the academics aren’t natural-born entrepreneurs, they knew they needed help getting off the ground and turned to the U of A’s eHUB for help.

“We entered the mentorship program in May 2017, and thanks to help from outside business experts, we went from a name on paper in June to selling at farmers’ markets in September,” said Ronzani.

“Today, consumers are very interested in sustainable foods,” said Tony Briggs, executive professor at the Alberta School of Business and co-founder of eHUB. “Camola has identified a triple bottom-line opportunity that is good for people, planet and profit, which is something more and more startups are aiming to achieve.”

He added that one of the strengths of Camola’s approach is the wide variety of ways they can leverage their capabilities. “Their expertise extends from supply to the bakery—and I have to say their ‘Bugscotti’ are pretty good!”

Initially, La Rocca and Ronzani focused their messages on the benefits of insects as a source of protein. But a panel of mentors at eHUB, including Jankovic, helped them rework the focus to known selling points.

“Our new branding is around edible insects being a culinary adventure that’s good for the environment and your health,” said La Rocca.

“We’re seeing insect protein in stores, mostly in protein bars. What I love about these two is that they are differentiating themselves by making baked goods,” said Jankovic. “And of course, they’ve already nailed great taste.”

Today, Camola enjoys sales through its farmers’ markets and is building awareness through savvy use of social media. They’re also working toward creating their e-commerce platform.

“If they really want to ramp up, they may need to consider exporting,” added Jankovic.

For now, the couple finds time to develop recipes, bake and sell while Ronzani studies and La Rocca works for a U of A lab. “It’s definitely a busy schedule but we’re passionate about it,” said La Rocca.

“One of our biggest target customers is Canadians aged 50-plus. Now we’re trying to figure out how best to reach them,” added La Rocca.

They are planning to introduce a high-protein bread and other healthy food products this year and are experimenting with other insect flours such as mealworm, since there are more than 2,000 edible insect species on the planet.

The farmers’ markets are a useful tool for testing out customer tastes and reactions, added Ronzani.

“Explaining to each customer why edible insects are a smart environmental and dietary choice is a big part of what we do now,” she said.

“But we’re just doubling down our efforts because we are determined we can convince the public that our products are a better alternative.”