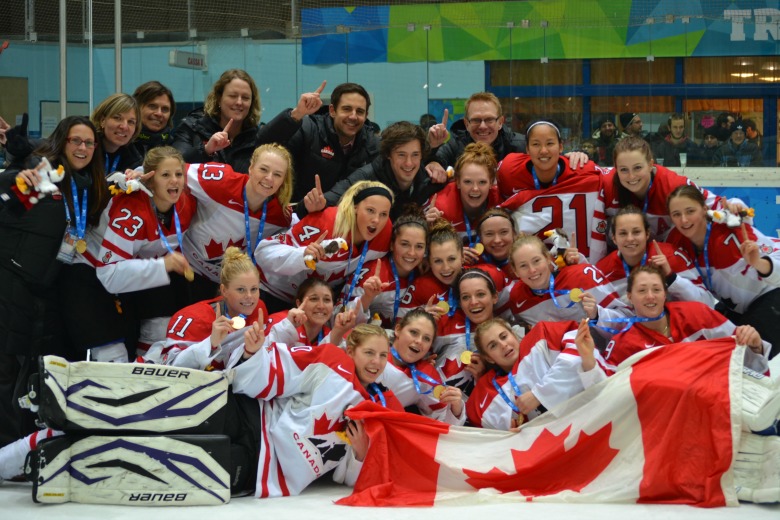 (Edmonton) Howie Draper, head coach of the University of Alberta Pandas hockey team and the most successful coach in Canadian Interuniversity Sport women’s hockey history, has added another gold medal to his collection, as he guided Team Canada to the top of the podium today at the 2013 FISU Winter Universiade Games in Trentino, Italy.

Canada, which cruised through the round-robin portion of the tournament with an unblemished record, defeated Russia 5–0 in the championship final Friday.

“I’m excited, I’m elated!” said Draper. “I’m not sure this was our best game. When you’re playing in the final, your nerves start to get the better of you. I felt the first period was little rough, but we picked it up after we got the first goal and played a little more relaxed. We wanted to play physical from an offensive standpoint. We wanted to drive the net lanes and take the puck to the net. We wanted to create traffic, and they didn’t like that too much, so it created some physical play on their part. Our girls executed the game plan and I’m very happy for them.

“I don’t want to say that one [player] stood out," he added. "They all had great games, and maybe when a few weren’t having their best game, others stepped up—and that’s what great teams do. It was a great team, great to coach them and nice to finish off with a gold.”

For Draper, though, it is the first Team Canada medal of any kind. He has won seven CIS gold medals as a coach, one more as a player with the Golden Bears, and medals at the provincial championship level. The three-time CIS coach of the year also recently completed his master’s degree from the U of A.

After racking up a 5-0 record through round-robin play and earning first place, Canada dominated the U.S. team in the semifinals to advance to the gold-medal game. Against Russia, the Canadians jumped out to a 2-0 lead after 40 minutes and scored three more times in the third period to clinch the gold medal. In fact, Team Canada has never lost a women’s hockey game in three straight Universiade tournaments.