U of A wildlife expert offers five tips on how best to coexist with growing coyote population. 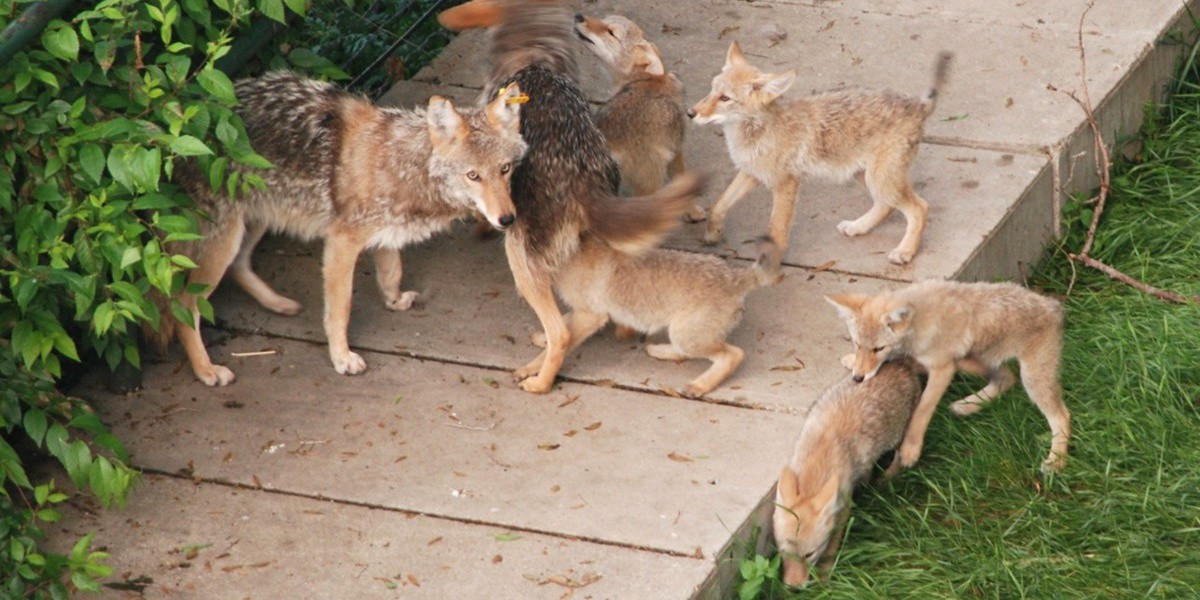 Edmonton's coyote and human residents can coexist with some precautions and healthy respect for the wild animals' behaviour, says a U of A biologist. (Photo: John McClay)

This year’s long, hard winter looks like it paid off for Edmonton’s coyote population, so people have to step up more than ever to make sure they get along with their four-footed neighbours.

“There have been numerous reports this spring of quite aggressive behaviour,” including a fatal attack on a large off-leash dog, said Colleen St. Clair, a University of Alberta biologist with the Faculty of Science. “This is shaping up to be quite a year for human-coyote interactions.”

That means people—especially pet owners—have to be vigilant in respecting coyote behaviour, she said.

Reported sightings of Edmonton’s estimated 500 to 1,000 coyotes indicate they are healthy and on the prowl this spring, after feeding on deer and other prey weakened by the bitter winter, and surviving an outbreak of mange that has faded over the last few years.

“We’re aiming to support coexistence, a win-win situation. It’s fair for people to want their children and pets to be safe—when a coyote is in a schoolyard, that’s not a good thing—but like many other dangers, traffic, for instance, there’s a responsibility for people to protect themselves from hazards that occur in cities.”

While coyotes are regarded by some people as pests to be exterminated, there’s no feasible way to do that, since they can reproduce at a high rate, especially if they feel their population is threatened.

“If dominant animals are being shot, more of the younger animals will breed, causing population size to increase more rapidly,” said St. Clair.

Nor is there a pressing reason to eliminate them, said St. Clair, who works with the City of Edmonton on the Edmonton Urban Coyote Project. “They have an aesthetic presence a lot of people enjoy.”

The trouble begins when they clash with humans and dogs, usually through no fault of their own. People play a big part in creating issues of territorial behaviour in two major ways: letting their pooches run off-leash outside of designated dog parks and providing easy access to food sources, St. Clair noted.

Combined, the two practices create aggression in coyotes protecting their food sources—and at this time of year, their young—against interlopers.

“It’s a collision of resources, behaviour and season that cause this intolerance.”

Here’s a guide to coyote/human coexistence:

Don’t leave offerings out for coyotes, intentional or not. Besides meat, they’ll also dine on food scraps left in the garbage, compost and fallen fruit, like crabapples, so make sure there are none left lying on the ground. They’ll also eat spilled birdseed, so hang a net under any feeders and contain compost. This will also help keep away mice, another coyote food source. Keep public spaces litter-free.

Cats should be kept indoors or safely secured in outdoor pens. Outside of designated dog parks, Fido should be leashed. Letting the dog run free and assuming it will come back to meet you is taking an unnecessary risk with your pet’s life. “Often in coyote conflict, they’ll engage in a chase with a dog, and when they get it to a secure place, they’ll ambush it. It’s a multi-step process that at first seems like play to the dog,” explained St. Clair.

Conflicts can occur around the edges of natural areas, including around the city’s dog parks. “Coyotes have this perception it is their territory, especially if people are providing food sources. They’re going to guard that territory.” Other hotspots around Edmonton include areas around the U of A’s South Campus, Victoria Golf Course, Riverdale, MacKenzie and MacKinnon Ravines.

When you encounter a coyote, send an unfriendly message with scare tactics. Knock sticks on trees to make noise, shout at them, wave your arms, and if they come too close, throw an object, such as a tennis ball with streamers of flagging tape to scare them off. And, said St. Clair, don’t run away. “Like most dogs, this makes them want to chase you.”

To keep them from settling in the neighbourhood, secure spaces like unfenced yards and the spaces under dryer vents and decks with bushes and plants that offer thin, dense vegetation close to the ground.

Report observations to Edmontonurbancoyotes.ca to contribute to an ongoing U of A study about human-coyote interactions in Edmonton to help identify tips for coexistence with coyotes. For serious incidents, call the city’s 311 line or the Alberta Environment and Parks coyote hotline at 780-644-5744.