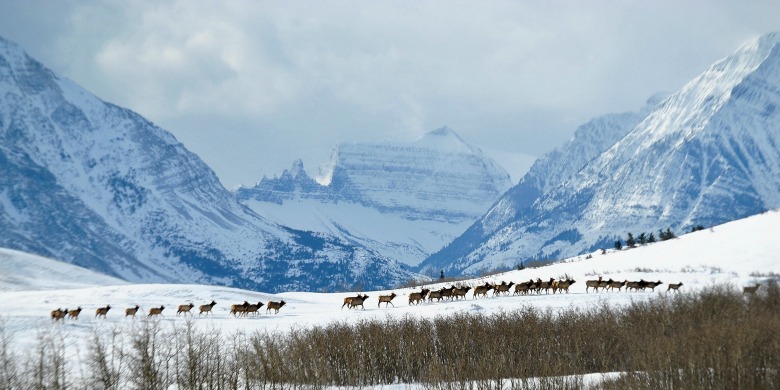 121128-elkinmountains-banner
UAlberta researchers found that elk herds in southwestern Alberta are disturbed more often and more easily by human activity than by natural predators like bears and wolves.

(Edmonton) University of Alberta researchers discovered that elk are more frequently and more easily disturbed by humans such as ATV drivers than by their natural predators like bears and wolves.

The U of A researchers, led by biologist Simone Ciuti, spent 12 months in southwestern Alberta. The study involved elk herds made up of females and their offspring. The researchers observed the animals’ reactions to different rates of human disturbances in the form of traffic on nearby roads and off-road, all-terrain vehicles.

The elk in the study were found on a variety of land types—public, private and inside Waterton National Park.

The research data showed that starting with a rate of just one vehicle passing by an elk herd every two hours, the animals became disturbed and more vigilant. In this state the elk consume less food, which can affect their health and possibly their calving success.

The researchers found that the highest level of disturbance happened on public lands where the effect of hunting and ATV use was cumulative.

Ciuti says this shows that the animals’ reactions are not shaped by numbers of people but by the type of human activity they’re exposed to.

Observing the elk from long distances so as not to alter their behaviour, the researchers took detailed notes documenting the frequency and amount of time the elk spent scanning the horizon for danger rather than foraging for food.

Ciuti says the U of A gave him an invaluable experience as a field biologist.

“Observing elk, especially in December, can be physically demanding, but you see things you can't even imagine, like a grizzly bear chasing an elk herd, trying to single out a calf,” he said. “The U of A is the right place to be if you want to study animal ecology.”

This research was supervised by U of A biology professor Mark Boyce. Followup research comparing birth rates in North American ungulates with levels of human disturbance will be conducted by researchers from the Boyce lab at the U of A.

The research was published Nov. 28 in the journal PLOS ONE.