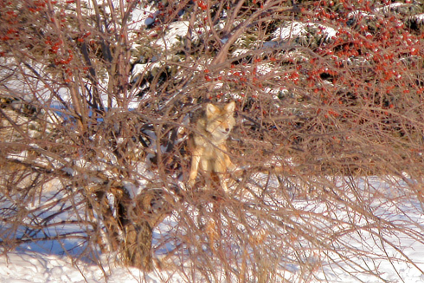 Human encounters with bolder Edmonton coyotes on the rise

Biology professor offers advice on what to do when people and pets cross paths with coyotes. 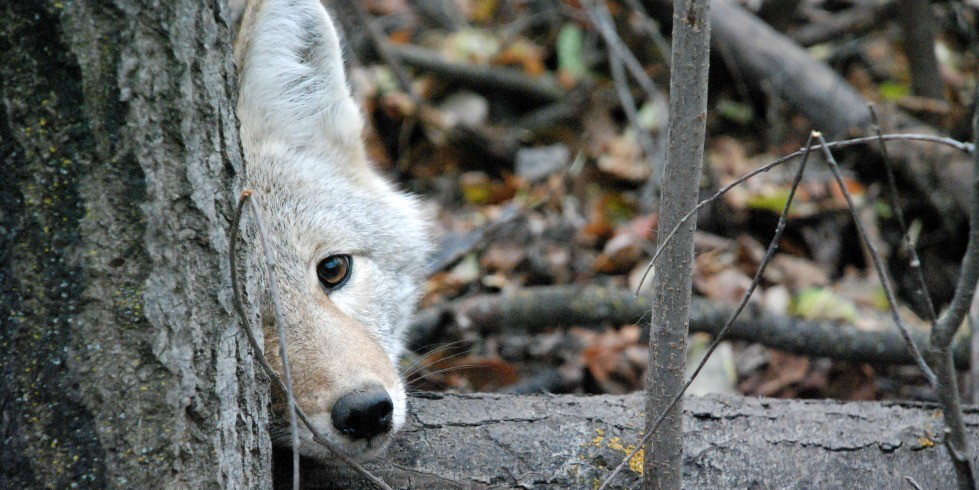 Coyote encounters are on the rise in Edmonton, so it's increasingly important for people to know how to avoid conflict with the urban-dwelling creatures, says a biology professor at UAlberta. (Photo: Colleen Cassady St. Clair)

(Edmonton) Edmonton coyotes are becoming healthier and more brazen, if recent reports of interactions with humans are any indication.

According to University of Alberta biology professor Colleen Cassady St. Clair and her PhD student Maureen Murray, reports reached an all-time seasonal high of more than 500 this fall on the website of The Edmonton Urban Coyote Project.

“There are a lot of reports of bold coyotes, where they’re acting territorial and threatening people, usually incidentally,” says St. Clair. “But often, what they’re really threatening are pets.” About 50 per cent of reports involve an off-leash dog.

“It is not clear yet whether coyotes are increasing in numbers, boldness or both, but they appear to be exhibiting more territorial behaviour in some neighbourhoods.”

St. Clair says she can only speculate at this point as to why coyotes are becoming more confident around humans, but there are a few likely causes. In the past few years, for instance, populations had been fighting a high prevalence of sarcoptic mange, a skin parasite that causes intense itchiness. Infected coyotes scratch so much that they pull out their own fur and cause skin lesions, which produces secondary effects like weakness, infections and hypothermia.

A compromised ability to hunt means they become more dependent on humans for food and are therefore less shy. It may look like bold behaviour, says St. Clair, but mangy animals tend to be “weak and meek” rather than aggressive.

Now that the disease appears to have abated, the healthier coyotes are becoming more assertive. “In this last season, not a single animal we captured had mange,” said Murray.

A couple more potential explanations for the bolder coyotes were offered at a recent annual meeting of the project’s ad hoc “Coyote Committee” by Bill Abercrombie (Animal Damage Control), who has donated his time and resources to the project for the past five years. First, there was a large die-off of whitetail deer last year, which made for easier hunting and scavenging. Second, an outbreak of parvovirus would have killed a lot of pups. St. Clair speculates that Edmonton’s coyote population is proportionately older, healthier and more confident than in recent years.

Reports to the project website demonstrate that one hot spot for coyote sightings in Edmonton is the university area, probably because of its close proximity to the river valley and several mature neighbourhoods. Coyotes make frequent use of the footbridge from Hawrelak Park, says St. Clair, and are attracted by compost in the zoo area as well as by bird feeders, backyard compost, fruit trees and dense vegetation. But there have also been reports in southwest Edmonton and Mill Woods. 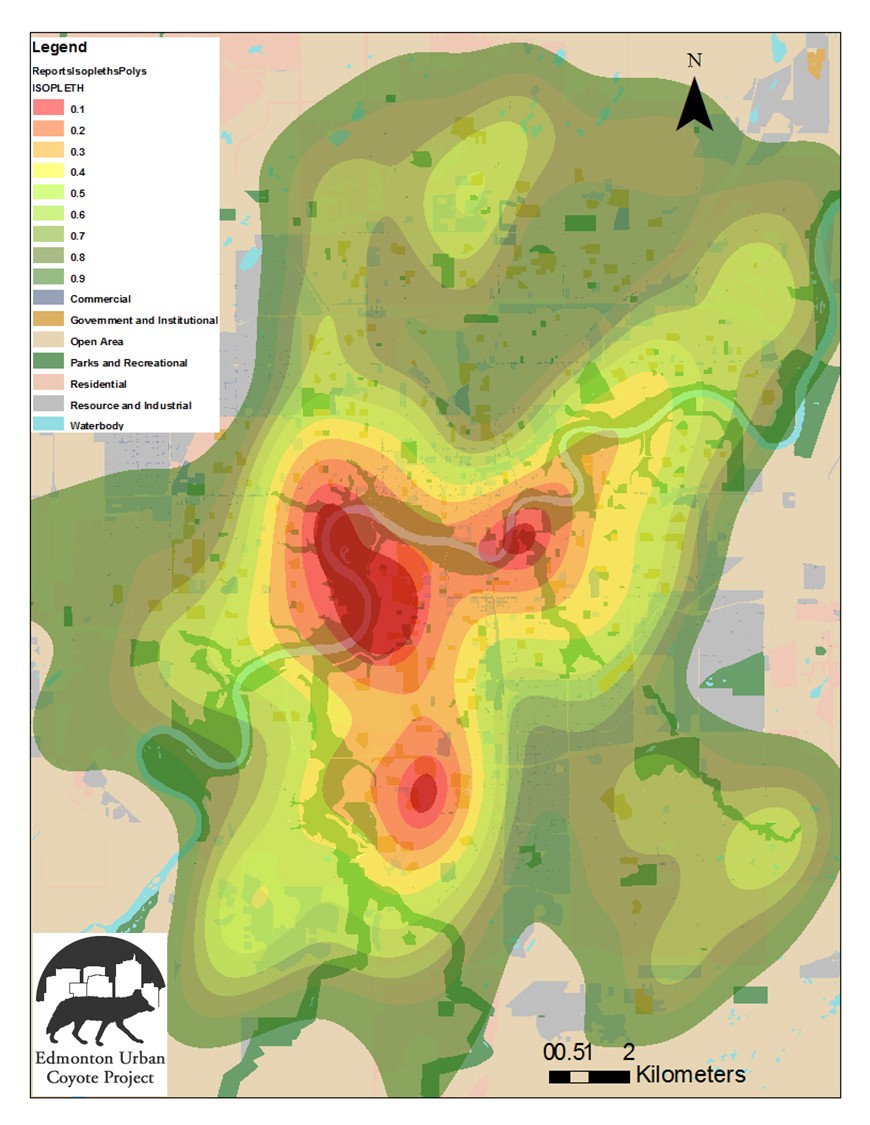 The red areas on this heat map of Edmonton show the "hot spots" where coyote encounters have been most frequent.

The Edmonton Urban Coyote Project got its start in 2008 when St. Clair submitted an NSERC Discovery Grant partly to explore why coyotes seemed to be more prevalent than they had been in previous decades. She reached out to the city, and a “phenomenally successful” partnership between the U of A and the city was born.

“It seems to work well, and we try to help each other out as much as we can,” says Ramsay Cox, a city park ranger. “If there’s information she can pass on, or vice versa, regarding sightings of coyotes in a given area, it helps everyone … and the more people know about it, the better the reporting.”

Since the launch of the project, St. Clair and her team have learned much about coyotes. Murray used GPS collars to examine coyote movement, habitat selection, diet and disease for her dissertation research. The project website continuously collects information on the perceptions and observations of residents about coyotes.

All of this is in hopes of guiding policy that will reduce rates of conflict and foster coexistence with coyotes in Edmonton and across North America.

“I’d be the first to say sometimes lethal management is the responsible and right thing to do,” says St. Clair. “You just don’t want it to be the only tool in your toolbox.”

The best tool is public education, she adds, which can replace habituation and food conditioning by coyotes to people with sensitization and greater wariness. She encourages residents to make their interaction with coyotes as unpleasant as possible for the animals by yelling, waving their arms and even throwing golf balls, sticks or other small objects.

And feeding coyotes, or failing to restrict them from attractants like compost, fallen fruit or garbage, is the worst thing you can do.

Once coyotes are food-conditioned, conflict is almost certain, St. Clair says. “It’s much better to scare and even hurt these animals to keep them wary than to ignore the problem until there are demands to shoot them.”

Until that message gets across, the prevalence of aggressive coyotes in Edmonton is likely to get worse. “I think we’re on the thin edge of the wedge,” she says.

In addition to Animal Damage Control, The Edmonton Urban Coyote Project receives advice and support from several employees of the City of Edmonton, Alberta Environment and Sustainable Resource Development, and the Royal Alberta Museum.

Be a friend to the coyote: show your ugly side

The best way to make urban coyotes more wary is to make yourself decidedly unpleasant so they learn to fear humans. Here are a few tips, courtesy of the U of A’s Edmonton Urban Coyote Project:

Human encounters with bolder Edmonton coyotes on the rise
Newsroom