Human-induced climate change dates back much further than we think: study

Evidence crowdsourced from archeologists worldwide suggests land use for hunting and farming has contributed to global warming for at least 5,000 years. 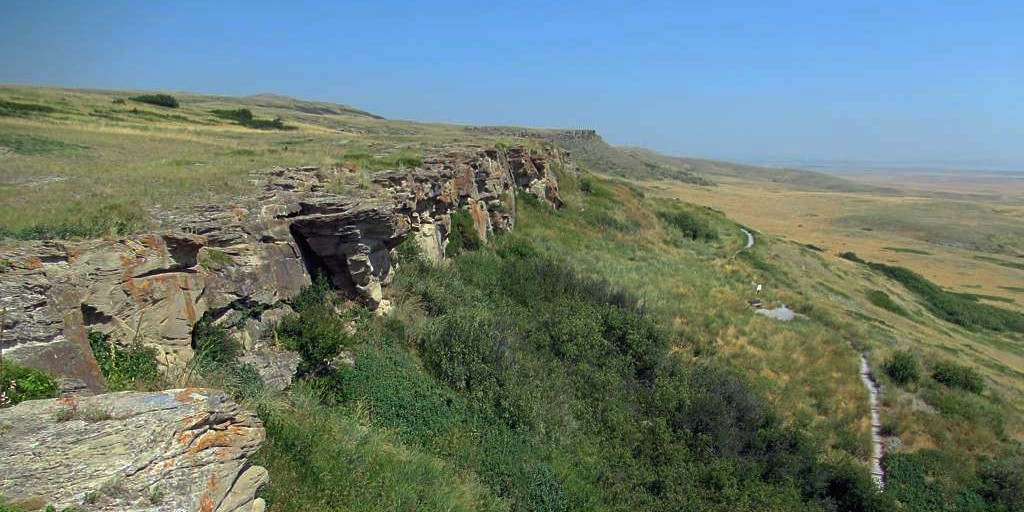 Head-Smashed-In Buffalo Jump in southern Alberta, which was used for millennia by Plains Indigenous people to hunt bison, bears evidence of controlled burning to clean up the site after a kill, according to U of A archeologist Jack Ives, who contributed to a study suggesting humans have had a detectable impact on Earth's climate for at least 5,000 years. (Photo: David Stanley, Flickr)

Human-induced climate change has origins far earlier than commonly assumed, according to a study published in the journal Science.

Archeological evidence collected around the world suggests human activity began warming the global climate about 5,000 years ago, according to U of A anthropologist Jack Ives, one of many scientists who contributed data to the study.

The authors found that “existing global reconstructions underestimate the impact of early human land use on Earth’s current ecology,” since most studies of climate change focus on the recent past.

“While there has been an exponential increase in human impacts on climate in the last two centuries, that impact has a long tail running back at least 10,000 years, particularly with the advent of agriculture,” said Ives.

“We have been affecting the global environment for some time as a species,” he said, “and while known by archeologists, these findings have not received the attention they deserve.”

Major events in human history, such as the rise of extensive agriculture in the Fertile Crescent in the Middle East, rice agriculture in China and maize agriculture in parts of North, Central and South America “were beginning to impact methane and other greenhouse gases,” said Ives.

Ives said scientists use a model called the Milankovitch Cycle to predict climate change over thousands of years, based on changes in the Earth's rotation, axial tilt and precession.

However, the accuracy of that model breaks down about 5,000 years ago, suggesting human intervention.

“Things were becoming noticeably warmer, and couldn't be explained by that Milankovitch patterning,” he said.

In the largest crowdsourcing study of its kind, published last August, 255 archeologists contributed data from more than 700 regional questionnaires describing hunting and gathering, pastoralist and agricultural land use at 10 time intervals—beginning 10,000 years ago and extending to the 19th century—across all continents except Antarctica.

The authors conceded that the regional information was not uniformly strong, and “differs greatly from one region to another.”

According to the available data, human activity, including burning and clearing of land for farming, began to significantly alter global patterns of biodiversity, ecosystem functioning and climate around 5,000 years ago.

By 6,000 years ago, 42 per cent of human-occupied land “had at least minimal extensive agriculture,” the study found. Evidence of climate warming is also consistent with the appearance of domestic animals between 4,000 and 8,000 years ago.

However, the researchers also found that, even before the domestication of plants and animals, “widespread evidence of hunter-gatherer land use indicates ecological conditions across most of the terrestrial biosphere were influenced extensively by human activities, including the use of fire to enhance success in hunting and foraging.”

“And in the Amazon Basin and other forested regions, (there was) a prominent form of horticulture that involved slashing and burning portions of the forest to allow for crop planting,” added Ives, who has been researching prairie archeology for the past dozen years as executive director of the U of A’s Institute of Prairie Archaeology.

He said there is strong evidence that First Nations people in North America, like Indigenous people in many regions, had “a systematic understanding of fire and its power,” engaging in purposeful controlled burning of forests and grasslands.

“Some communities undertook strategic burning to keep trail systems and portages clear, to open up campsites and also at times to purposely change the character of a forest.

“The burning of climax boreal forest communities, for example, releases nutrients back to the soil, opens up the canopy and generates a new succession of animals and plants. Blackfoot and other Plains peoples could influence prairie forage through systematic uses of fire.”

Ives said there are signs the Blackfoot in southern Alberta burned land surrounding Head-Smashed-In Buffalo Jump to “clean it up” and eradicate the unbearable stench from the kill. The site was used for thousands of years, beginning about 6,000 years ago, to kill bison by driving herds off of a cliff.

“Shortly after the burn, people discovered there was a new flush of grass that was extremely attractive to feed bison,” said Ives.

He said there are lessons to be learned today from the earliest First Nations practice of controlled burning.

“Many of these incredibly destructive fires we're seeing, such as in California, British Columbia and the northern Prairie provinces, can be attributed not just to climate change or global warming, but to the buildup of fuel because we have been suppressing fires for so long.”

Human-induced climate change dates back much further than we think: study