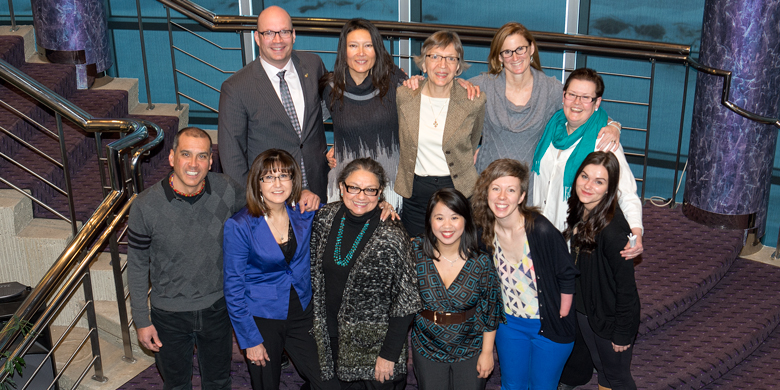 131210-humanrightsawards02-banner
United they stand: The winners and runners-up for UAlberta's inaugural Human Rights Education Recognition Awards were recognized at a ceremony Dec. 10 at the Timms Centre. (Photo: Richard Siemens)

(Edmonton) A new package of awards was launched today to recognize those who “go above and beyond” in promoting human rights at the University of Alberta.

The Human Rights Education Recognition Awards were handed out to one exceptional student, one faculty member and one teaching team in a ceremony at the Timms Centre Tuesday.

Malinda Smith, a political science professor in the Faculty of Arts, received the academic staff award for her 25 years in human rights education and awareness.

“It is a special honour—and indeed a reminder of our collective responsibility—to receive this award on World Human Rights Day,” said Smith, “and at a moment when the world has come together to mark the passing of Nelson Mandela, a giant in the struggle against the evil of apartheid and racial injustice, and an exemplar of respect for human dignity, tolerance and social justice for all.

“I commend the University of Alberta for creating these awards, which reflects a commitment to respect and promote human rights as well as the university's sacred obligation to advance human rights education for the public good.”

Because the race in the academic staff category was so tight, the three runners-up also received honourable mentions—education professor Kris Wells for his contributions to the Institute for Sexual Minority Studies and Services; Melanie Lewis, associate dean of the Faculty of Medicine & Dentistry, for her work with the Office of Learner Advocacy and Wellness; and Ruby Swanson, general manager of the Devonian Botanic Garden, for her efforts to promote the rights of the LGBTQ community across campus.

Taking home the student award was Nhu Trieu, an undergraduate in molecular genetics and president of Amnesty International’s U of A chapter, cited for her “exceptional commitment to human rights education,” said Marjorie Henderson, communications and intake co-ordinator for the Office of Safe Disclosure and Human Rights.

“All the recipients were really fantastic,” said Henderson. “We hope this will encourage people to nominate their colleagues next year.”

The awards program was part of a week-long celebration of human rights awareness. Also taking place this week is a conference addressing the state of human rights in Canada and featuring keynote speaker Edgar Schmidt, a retired general counsel from the Department of Justice Canada, who discussed a claim he has brought before the Federal Court of Canada asking for clarification of the duties of the minister and deputy minister of justice to vet proposed legislation for conformity with the Charter of Rights.

Also speaking was Howard Sapers, correctional investigator of Canada and former MLA for Edmonton-Glenora, who looked at the state of Canada’s penitentiaries.

The awards ceremony was also a chance to recognize the top three entries in the Breaking Stereotypes student photo contest meant to draw attention to casual stereotyping on campus.

The winning photo was submitted by Augustana student Shaun Dubash, who celebrated his relationship while calling out a racial stereotype.

Second prize went to business student Sasha Platz for her reminder that discrimination against Aboriginal people affects everyone.

Nursing student James Eneles took third prize for his image busting a stereotype about males in his chosen profession.