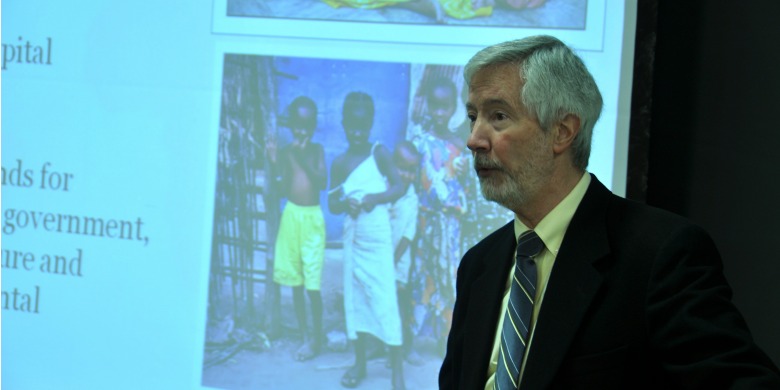 (Edmonton) There’s a family in the United States that lives in virtual space, allowing audiences around the world to tune in to watch it live and grow. When the parents announced their 20th pregnancy, Bill Ryerson started punching numbers.

“I multiplied 20 by 20 to find out how many offspring they’d have if their 20 children each had 20 children. I kept going for a total of 10 generations,” says Ryerson, a featured speaker at the University of Alberta’s International Week.

Obviously, that won’t be the case for most families, but the growth rate of the world’s population—at a gain of about 80 million people a year—is creating serious problems for human health, says Ryerson, who spoke on Global Health and the Media at an  Feb. 1 event.

“You cannot have infinite growth in a finite universe. Growth will stop, and it’s either going to stop because we bring the birth rate down or because nature imposes it thorough higher death rates. And that’s what we want to avoid.”

The former ecology professor founded the Population Media Center , which uses media worldwide to promote social change by helping communities address health issues. He says many ecologists are concerned that high birth rates are causing poor health, particularly in women, as well as high death rates. Moreover, population growth in some countries has driven them toward even worse environmental situations.

“The best we can do is to help reduce fertility rates worldwide as quickly as possible,” he says.

Ryerson cautions that the problem of population growth shouldn’t be understood along global divides between developed and developing nations. After India and China, he says, the U.S. has had the highest recent increment in population growth, growing by about three million people a year.

“For long-term sustainability in the U.S., this is of concern in part because the U.S. consumer is the most destructive on the planet,” Ryerson says.

“Nevertheless, most of the growth is happening in the developing countries.”
The future looks hopeful because all projections assume a decline in fertility rates, he says. But if that doesn’t happen, then world population could double in about half a decade which would put serious pressures on natural resources. That’s why he makes it a priority to speak with students, who could play an important role in helping redress these problems.

Ryerson says events such as International Week help expose students to pressing global issues. “It is very important in part because it’s very easy for young people, particularly in North America, to be insular and to not look beyond their cellphone or TV sets, for example, to understand the wider world and what’s going on. So to expose them to the world situation is a key part of education. And to find ways to meaningfully get them involved on global affairs is very important,” he says.

International Week, organized by the University of Alberta International Education Abroad program, is just one of many programs the university uses to meet its responsibility as a global citizen, says Britta Baron, U of A vice-provost and associate vice-president (international).

“We feel strongly that our students, faculty and staff need to know what’s going on in the world and be aware of major global developments and how they play out in so many different ways and places,” Baron says. “Only a fully informed global citizen is going to be able to live up to their role in society.”