This removes this very limited idea of this corridor as simply a route for the very first North Americans, to now suggest a much richer history—that it was used multiple times by populations likely moving in both directions.

New evidence found in bison fossils gives clues to human and animal movement in Alberta during the last ice age. 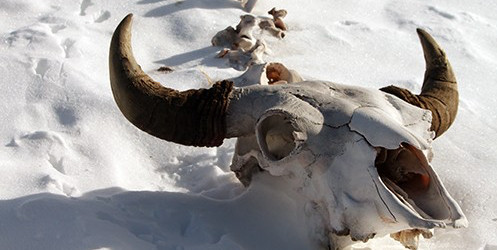 A lightly scavenged bison kill made by wolves in Yellowstone National Park in 2014, still present in February of 2016. The shorter, inward curving horns of this modern Plains bison stand in marked contrast to the more massive flaring horns of its Pleistocene steppe bison ancestors. Image and text courtesy of Kim Ives and John W. Ives.

New evidence from bison fossils has enabled scientists to shape a more accurate timeline for the North American Ice Free Corridor in the late Pleistocene, shedding new light on human and animal migration during the last ice age.

“What we’ve done is put some fairly strong constraints on when this area was viable, and when it was connected to the north and the south in terms of it being a corridor,” explains Duane Froese, Canada Research Chair in Northern Environmental Change and professor in the Department of Earth and Atmospheric Sciences.

Stretching across today’s central Alberta, the corridor was an important connector between Beringia in the far North (near Alaska and the Yukon) and the rest of North America, which was otherwise covered by kilometers-thick ice. Though it has long been known to have been used by humans and animals, questions remained about when and how the route was used.

Now, researchers believe they have uncovered a few of these answers from ancient bison fossils.

“For archaeologists, these bison data are helpful in understanding waning Ice Age conditions as Indigenous peoples expanded in the Americas,” explains U of A Landrex Distinguished Professor John W. (Jack) Ives of the Department of Anthropology.  The presence of bison in the corridor would suggest that people—who relied on the presence of megafauna like bison for food—could be expected to have been around at the same time.

Froese and Ives teamed up with colleagues at the University of California, Santa Cruz, to analyze these bison genetics and determine where the populations originated, using a combination of radiocarbon dating and DNA analysis.

“The radiocarbon dates told us how old the fossils were, but the key thing was the genetic analysis, because that told us when bison from the northern and southern populations were able to meet within the corridor,” says first author Peter Heintzman, a postdoctoral researcher at UC Santa Cruz who led the DNA analysis.

The results showed that the southern part of the corridor opened first, allowing southern bison to start moving northward as early as 13,400 years ago, before the corridor fully opened. Later, there was some movement of northern bison southward, with the two populations overlapping in the corridor by 13,000 years ago.

“There were established Indigenous populations both in central Alaska and south of the ice masses before 14,000 years ago; this new information shows that before 13,000 years ago, bison—and therefore, likely people—could move between these two regions, previously separated by a glacial barrier,” says Ives.

The amount of northward movement was a surprise to researchers, who expected to find predominantly southward migration patterns. Explains Froese, “This removes this very limited idea of this corridor as simply a route for the very first North Americans, to now suggest a much richer history—that it was used multiple times by populations likely moving in both directions.”

The bison samples were stored in collections at the Royal Alberta Museum and Simon Fraser University, built up over years as fossils were recovered from construction sites and gravel pits in Alberta and archaeological investigations at Charlie Lake Cave (Tse’Kwa’) in northeastern British Columbia. “It’s a testament to the long-term contributions these museum collections can make, even if they were collected without any of these ideas in mind—which was the case with these fossils.”

The findings were recently published in Proceedings of the National Academy of Sciences.