UAlberta researcher uses math to explain how a thrown rock acts like a jammed circular saw. 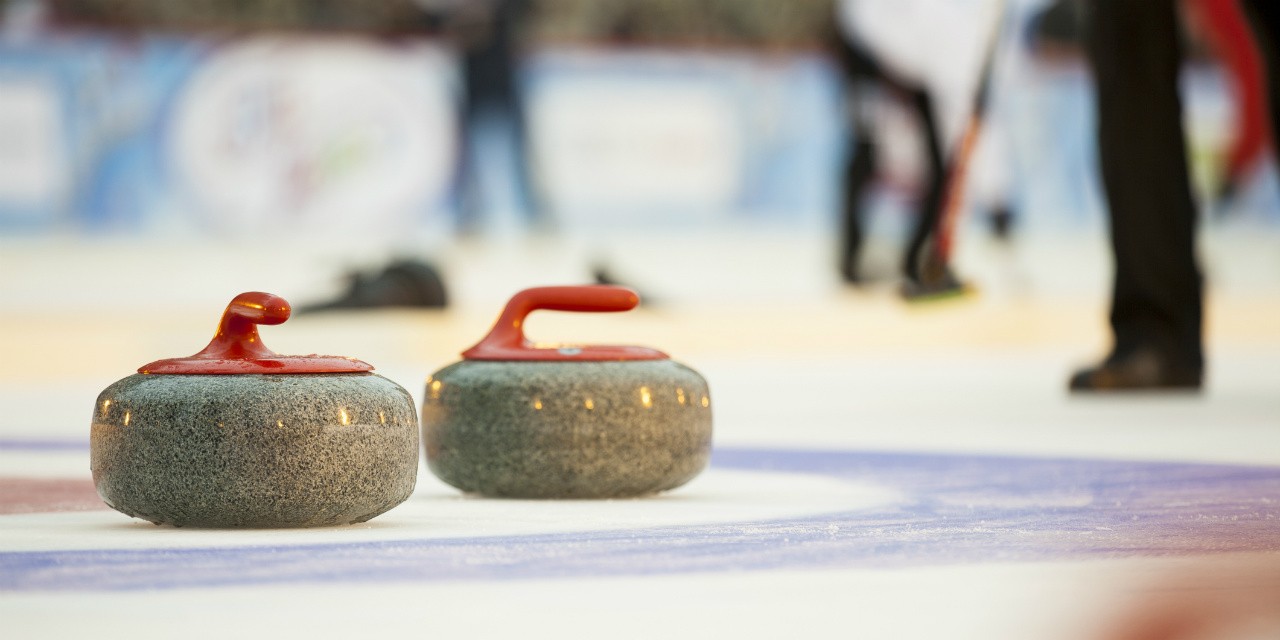 A UAlberta researcher has developed the first mathematical model for why curling rocks curl as they slide down the pebbled ice.

The sporadic and hazardous jolts that accompany a circular saw that jams while cutting through a particularly heavy substance goes a long way in explaining why curling rocks curl, says a University of Alberta professor emeritus who created the first mathematical model that explains this phenomenon.

To understand how a curling rock makes its way down the ice once it has left the shot-maker’s hand, Ed Lozowski, a former ice researcher in the Department of Earth and Atmospheric Sciences, said it’s important to understand the surfaces involved.

The ice end of the equation begins with ice-makers who spray water droplets on a clean sheet of ice form ice pebbles or, ideally, cones. A nipping machine is then employed that truncates the cones at a uniform height.

The curling rock, on the other hand, interacts with the pebbles thanks to a circular band that protrudes from the bottom of the rock.

In Lozowski’s original theory, he figured every time the running band encounters a pebble, the rock pivots.

“Think of an automobile that hits a tree on one side. It rotates around the tree as the momentum tries to keep it going and the tree tries to stop the car at the particular impact point.”

“Assuming equal numbers of pebbles and everything being perfectly symmetrical left and right, there should be no net rotation. But because the rock rotates, there’s something else going on,” he said.

Unable to mathematically reproduce the elongated 'J' curl of a curling stone over the length of the ice with his first theory, Lozowski retreated back to the blackboard.

That is when he came up with what he calls the “circular saw binding effect.”

“If you have ever had a circular saw bind on you, where the blade jams and stops rotating, you know the whole saw starts to pivot—and that can be kind of dangerous,” he said. “I see the same thing with the curling rock.”

The researchers used curling rock handles decked out with scientific instruments in experiments at UAlberta's Saville Community Sports Centre. These handles were attached to rocks already sitting on the ice, to preserve their temperature.

He explained the textured running band of the curling rock actually binds to each pebble it encounters, and actually pulls each pebble's top. When the pebble top reaches its maximum elastic deformation, contact is broken and the rock lurches or pivots, “kind of like a circular saw."

He says even though each encounter produces a very small pivot, the total number of pivots is large. "The total pivot is on the order of a few degrees, which is consistent with what’s observed.”

He added, “Each individual encounter lasts a matter of tens of nanoseconds, which is something I find difficult to believe because I’m accustomed to thinking of nanoseconds in terms of quantum mechanics and not in terms of classical physics. It makes me really wonder whether I have this right or not.”

Despite Lozowski’s hesitation, the math works as has the math for a handful of winter sports with ice friction quandaries he has solved.

Just as his career of teaching meteorology at the U of A was wrapping up in 2003-04, Lozowski took a sabbatical at the National Research Council to work on ice formation on aircraft using their icing wind tunnel.

It was then that he hearkened back to when he did a little speed skating while he was a graduate student.

“I wondered, "There has to be a reason why speed skates are so fast?”

He ended up producing a model of ice friction for speed skates.

Lozowski then graduated to other ice sports—speed skating, bobsleigh, skeleton, luge—knocking them off at a clip of about one per year. Curling was next, an equally easy thought-experiment conquest that was just a matter of geometry—or so it seemed.

“It turns out it was completely different than what I expected,” he said. “It has taken the better part of four years to come up with a paper that actually predicts something.”

And though the paper explains physically what is going on as the curling rock arcs down the ice, Lozowski says "it’s not as easy to try and figure out how one might exploit that to give, let’s say, the Canadian team an edge at the Winter Olympics.