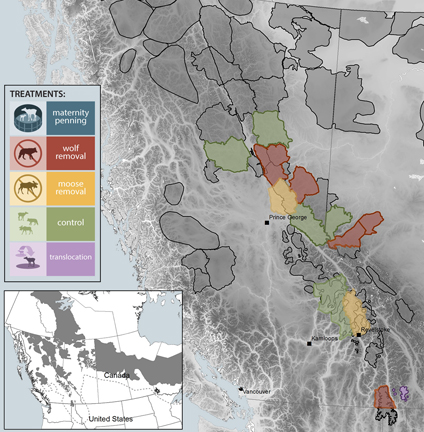 This map shows the distribution of woodland caribou in the Canadian Rockies, as well as the various population management treatments used over the past 25 years. (Courtesy of AMBI and Fuse Consulting.) 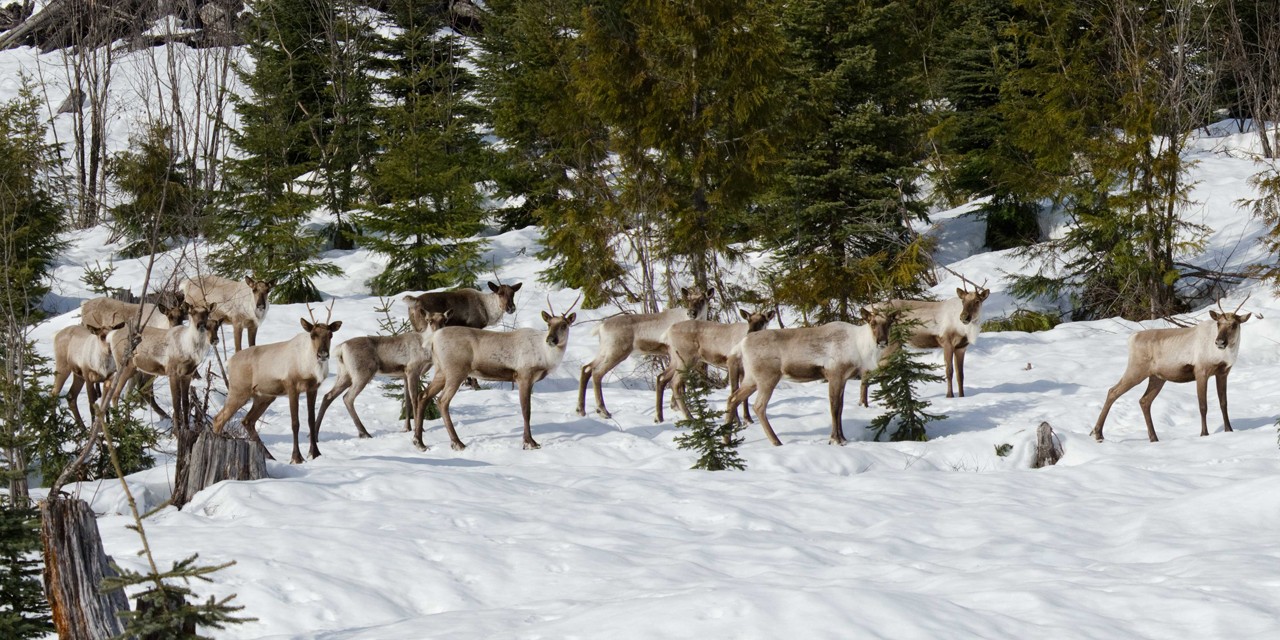 Woodland caribou evolved to live on the inhospitable fringes of Canada away from predators. Now, thanks to a combination of climate change and the overlap of natural resource development onto the caribou's once unfavourable lands, the predators have been delivered to the caribou. (Photo: Hans Mohr)

The fate of woodland caribou rest on a varied, immediate and intense response to reduce predation rates, according to a University of Alberta-led comprehensive review of population recovery measures.

“This is a conservation emergency,” said Rob Serrouya, director of the Caribou Monitoring Unit of the U of A-affiliated Alberta Biodiversity Monitoring Institute and lead author on the study. “Four herds in B.C. and Alberta have gone extinct over the last 25 years and there are less than 3,000 woodland caribou in the study area in the two provinces.”

With the clock ticking, Serrouya’s team analyzed results from 25 years of attempts to manage caribou populations in an area covering more than 90,000 square kilometres in the southern portion of the Canadian Rocky Mountains. The population management treatments studied were translocation, wolf reduction, moose reduction and maternity penning, which involves protecting caribou and their newborns during labour and for a month after birth.

What the group found was—save for the translocation, which Serrouya said was doomed to fail as it happened in an area where there was no predator reduction—removing wolves, moose and using maternity pens each worked. However, the researchers also found that if at least two of the treatments were tried in combination, population growth of the caribou was increased even more so.

The most dramatic population surge occurred In the Klines-Za population, north of Prince George, BC, where maternal penning and wolf removal strategies were used. In three years, the herd nearly doubled, from 36 to more than 67.

“To turn around a population of big animals is very rare in a conservation setting, especially with caribou,” said Serrouya.

And while doubling up on treatments led to the greatest success, the research showed that if any of the measures were done half-heartedly, declines continued.

In one instance, wolf removal was done to help the South Selkirk population, which makes its home back and forth across the U.S.-Canada border. However, the cull was only performed in Canada. The result was the herd went extinct in 2018 and the contiguous U.S. lost a large mammal species for the first time in modern times.

“If you go at it halfway, it there is not enough intensity across space or within that space, if you don’t try to remove as many animals as you can, it’s not going to give you the response,” said Serrouya. “When done right, we have shown a glimmer of hope for six populations in a landscape across Canada where many populations are declining.”

One of Canada’s most widespread species, caribou are found across Canada—from Newfoundland to the Yukon—and into Alaska. They evolved to live on the fringes—across the Arctic, boreal forest and mountain regions—in what is largely unoccupied, unproductive habitat. And yet, they possess traits that are incompatible with an ever-changing landscape.

Serrouya said a strategy of learning to live on the fringes, and not a heightened ability to fight or run, is what protected them from predators.

One of the implications of living on the margins is that the replacement rate for caribou is relatively low. Where moose can have up to three babies in a season, caribou never twin and take longer before they’re able to breed.

Now, thanks to a changing climate and development of the resource sector, those once-remote areas of old forest preferred by the woodland caribou are quickly being converted to rich, nutrition-filled forests coveted by moose and whitetail deer.

“When those animals expand into new areas, they bring with them predators such as wolves and cougars. Caribou become by-catch and they don’t stand a chance,” said Serrouya.

He added the population treatments may seem extreme, but they are just a way to return stability to the natural order.

“Caribou live across a huge area and they’re rare, but importantly their critical habitat overlaps with billions of dollars of oil reserves and hundreds of millions of dollars of forestry. The idea is not to conserve caribou at the expense of other animals, but to restore the ecosystem to previous, balanced conditions,” said Serrouya.

He added predator reduction is a Band-Aid solution and will need to be augmented by other actions that address ultimate, or closer-to-ultimate, causes.

“This is an emergency measure to stem the bleeding.”

The study, “Saving endangered species using adaptive management,” was published today in Proceedings of the National Academy of Sciences of the United States of America.