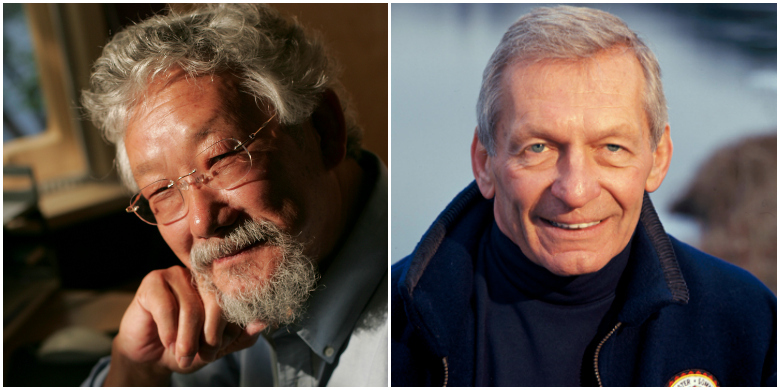 131028-suzuki-schindler-banner
Famed broadcaster and author David Suzuki will deliver a public lecture Oct. 30 to kick off a symposium celebrating the lifetime achievements of David Schindler.

If Suzuki were asked to compile a list of people he admires, another David—soon-to-be professor emeritus and the University of Alberta’s environmental conscience, David Schindler—would surely find his way onto such a list.

“Journalists dream of scientists like David—articulate, clear, uncompromising and fearless,” said Suzuki, who has worked with Schindler on a number of documentaries filmed for Suzuki’s long-running CBC flagship program The Nature of Things. “He has an impeccable scientific record, and that gives his words huge power.

Also, unlike someone like me who tends to rant and get emotional, David has a calm demeanour and speaks slowly in a measured way that is powerful.”

Suzuki says he first remembers meeting Schindler more than two decades ago while in Alberta covering a proposal to build a pulp mill in First Nations territory.

“Before that, I had heard of him as a water expert, so when I heard his words at this meeting, I was most impressed because he was walking a fine line between science and advocacy.”

However, Suzuki says his first real encounter didn’t take place until the pair worked together on a portion of the filming of The Sacred Balance (2001).

“We hiked up a mountain in Banff or Jasper, where David explained that the exposed edge of the snowcap revealed layers that, like rings on a tree, make an annual record,” remembers Suzuki. “He was terrific at making arcane information accessible and exciting for the lay audience.”

Later, Suzuki would spend time getting to know Schindler while canoeing down the Athabasca River next to the oilsands as part of a Canadian Parks and Wilderness Society campaign to protect Canada’s rivers, and today pays Schindler one of the great compliments a Canadian can ever hope to receive: “He was a fantastic canoeist and a great companion.”

As for what Schindler has meant to environmental sciences, Suzuki says his meticulous research and the courage of his convictions make the world a better place.

“His legacy is his utter commitment to doing good science that informs his pronouncements on public policy or implications,” said Suzuki. “Without his top-notch research, he would not have had the impact he has. For young scientists, his courage in speaking out even in the face of controversy, I hope will inspire them.”

David Suzuki is the keynote speaker at the kickoff event for Letting in the Light: Science to Guide Public Water Policy in the 21st Century, a symposium Oct. 30 and 31 celebrating the internationally acclaimed career of David Schindler.

The talk, entitled The Global Ecological Crisis: Setting the Real Bottom Line, will focus on humanity’s need to rediscover humility for the good of the planet. Lecture starts at 7 p.m. at the Myer Horowitz Theatre. Discussion with David Schindler will follow.

Get tickets for the public lecture by David Suzuki.