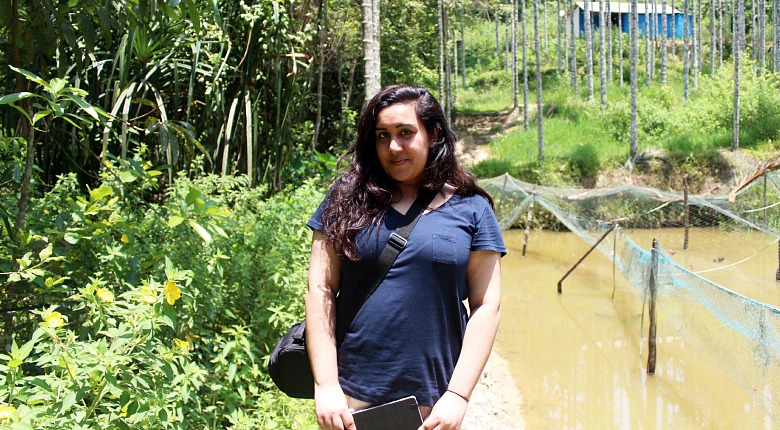 Simrat Minhas, a graduate student with the Department of Resource Economics and Environmental Sociology, found that people with home gardens are much more likely to have greater diversity in the food they eat than people who do not have one.

“Dietary diversity is related to health,” she said. “A lot of studies show that it’s strongly correlated with dietary quality and nutrient adequacy.”

Minhas assessed the food security status of the people in the three regions of India in which the project, called Alleviating Poverty and Malnutrition, is operating. The three-year, $4.9-million project is being conducted in partnership with the MS Swaminathan Research Foundation. It is funded by the Canadian International Food Security Research Fund, itself jointly funded by the International Development Research Centre and the Canadian International Development Agency. The project is examining different agricultural and nutritional interventions in three agro-biodiversity hotspots in the states of Odisha, Tamil Nadu and Kerala.

To assess the food security of the people in the three regions, Minhas conducted research using two indicators of dietary diversity: the Dietary Diversity Score, developed by US Aid in the 2000s; and the Healthy Food Diversity Index, developed in 2007. The Dietary Diversity Score counts the number of food groups consumed by individuals, and the Healthy Food Diversity Index measures consumption of healthy food groups based on recommendations from national food guides.

To establish the three areas’ dietary diversity scores, Minhas sifted through data from the project’s survey of 4,000 households conducted in 2011.

She found, among other things, that older respondents in Odisha and Kerala were more likely to have a diverse diet. Respondents with more land, larger home gardens and greater income were also likely to have greater dietary diversity. Men in Orissa were more likely than women to have greater dietary diversity. Home ownership was also found to have a positive effect in the three states.

Minhas used data from India’s National Nutritional Monitoring Bureau, which had information about all three regions, to establish their Healthy Food Diversity Index. She looked at several variables including community, family size, income, education, marital status, house type, age and physical activity status. The data had originally been compiled in 1984 and again in 2007.

She also found that being a member of a “scheduled tribe” or “backward class” had a negative effect on healthy food diversity, as did being part of a larger family in Tamil Nadu and Odisha. The opposite was true for those living in Kerala.

Overall, both indicators showed that being older, having land and earning a higher income had a positive effect on both the types and quantity of food consumed. However, there were also differences between the indicators.