Improving the odds for osteoporosis treatment 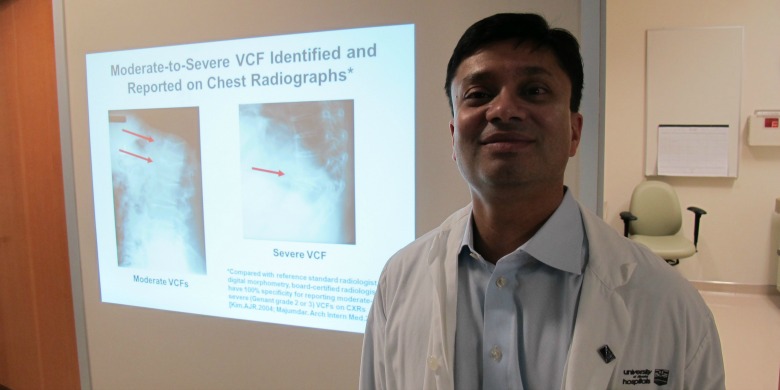 (Edmonton) Older patients who visited local emergency rooms for chest pain or breathing problems, and had chest X-rays that revealed spinal fractures, were more apt to receive osteoporosis treatment afterward if a simple intervention was used, according to medical research from the University of Alberta.

Treatment rates for the bone-thinning condition substantially improved when patients and their family doctors received followup information about the warning signs and risk factors. The study is the first and only trial in the world that looked at spinal osteoporosis.

Faculty of Medicine & Dentistry researcher Sumit Majumdar led the study, which was recently published in The American Journal of Medicine. It looked at patients over the age of 60 who visited two Edmonton emergency departments for various complaints and needed a chest X-ray, which incidentally revealed spinal fractures. One group of patients wasn’t contacted for an intervention, only physicians were contacted in another group, and both physicians and patients were contacted in a third group.

Family physicians targeted in the intervention received a one-page email, letter or fax from local doctors and nurses that explained osteoporosis treatment guidelines and recommendations. The same nurse phoned some patients to share the same information and answer their questions. These patients also received a pamphlet explaining the link between spinal fractures and osteoporosis.

“The information we provided was not new. But because it was linked to a specific patient and had specific advice, it acted as a reminder about what actions family doctors could take when they next saw that patient,” said Majumdar.

“These fractures identified in chest X-rays are associated with a 20-fold increase of future fractures in people with osteoporosis—and these can be devastating fractures like fractures of the hip that can lead to nursing-home admission or death,” he said. “What was also concerning is that two-thirds of the patients in the study had a previously documented wrist or hip fracture before the X-ray was done, but they never received osteoporosis treatment.”

Majumdar estimates the health-care system could save $1,000 per patient if high-risk patients like those in this study received proper followup testing and treatment for osteoporosis. Hip fractures alone cost about $50,000 each to treat, and osteoporosis costs the Canadian health-care system about $1 billion a year.

Compared with the costs of the education intervention—$34 per physician and $42 per patient—“it’s the equivalent of one month’s supply of osteoporosis medication,” said Majumdar.

One concerning revelation he noted in the study was that 25 per cent of the patients were men and none of them received followup treatment or testing as part of usual care. Majumdar attributes this to the fallacy that “osteoporosis is considered a disease of older women.” In fact, men have worse fractures and are more likely than women to die of hip fractures, he said.

The research was funded by Knowledge Translation Canada, the Canadian Institutes of Health Research (CIHR) and Alberta Innovates – Health Solutions.

“This is both a research and a knowledge translation success story, and CIHR would like to congratulate Dr. Majumdar on this important work,” said Phillip Gardiner of the CIHR Institute of Musculoskeletal Health and Arthritis. “The health-care costs associated with osteoporosis can be reduced and treatments improved when creative approaches like this are developed and implemented.”

Majumdar hopes this educational intervention program could be a model for other conditions that could be identified in the ER, with followup care being co-ordinated by nurses or pharmacists.

Osteoporosis is a chronic and progressive condition that leads to fractures (typically of the upper extremities, spine or hip), acute and chronic pain, deformity, diminished quality of life, disability and loss of independence, nursing-home admission and even death. It affects two million Canadians—about 25 per cent of women and 12 per cent of men over the age of 50.

A woman’s lifetime risk of osteoporotic fracture is 40 to 50 per cent; a man’s risk is 12 to 20 per cent. In Canada, the annual cost of managing osteoporosis is estimated at $1 billion, versus $750 million for heart failure or $600 million for asthma. Unless effective prevention strategies are implemented, the rates and costs of osteoporotic fractures are expected to double by 2025.