In memory of Ron Stevens 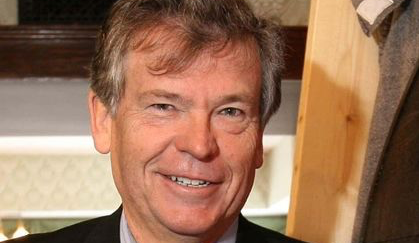 (Edmonton) The University of Alberta community is mourning the loss of Justice Ron Stevens, '75 LLB, who passed away unexpectedly May 13 in Calgary. He was 64 years old.

Stevens, a former longtime Alberta Tory cabinet minister, MLA and justice of the Alberta Court of Queen’s Bench was known for his tireless work ethic, intellectual prowess and commanding presence. He is survived by his wife Phyllis, a son and a daughter, and two grandchildren.

Stevens was born in 1949 in Empress, Alberta, and was raised on a farm just north of Medicine Hat. In 1971, he graduated with a BA in political science from the University of Calgary and went on to earn an LLB degree from the U of A’s Faculty of Law in 1975. He worked as a highly regarded civil litigation lawyer and mediator for a number of years before winning his first election in 1997, and represented the southwest constituents of Calgary-Glenmore for 12 years.

Shortly after winning his second election in 2001, Stevens was appointed by Premier Ralph Klein as minister of gaming and was responsible for the Alberta Gaming and Liquor Commission and the Alberta Lottery Fund. Following the 2004 provincial election, he was sworn in as minister of justice and attorney general. On June 27, 2007, he was named Alberta's deputy premier by Premier Ed Stelmach, who credited Stevens as being instrumental in negotiating the New West Partnership with British Columbia.

As an MLA, Stevens held the title of deputy government house leader and served in a variety of capacities on numerous boards and committees. He chaired the Legislative Review Committee, the Oil Sands Ministerial Strategy Committee (Radke Report), Health Information Legislation Committee, the Standing Policy Committee on Learning, the Private Schools Funding Task Force, and the Non-Profit Tax Exemption Review Committee. He was vice-chair of the Agenda and Priorities Committee and the Standing Policy Committee on Justice and Government Services, and deputy chair of the Select Special Freedom of Information and Protection of Privacy Act Review Committee. He also served as a member of more than 10 other committees.

After winning his fourth election in 2008, Stevens became minister of international and intergovernmental relations. He retired from politics in 2009 and was appointed a justice of the Alberta Court of Queen’s Bench that same year.

An active community member, Stevens served as president of the Palliser Bayview Pumphill Community Association, director of the Community Mediation Calgary Society, director of the Federation of Calgary Communities, and director and vice-chair of the Calgary Housing Authority.

Ron Stevens served in legislature and as a judge (Edmonton Sun)

In memory of Ron Stevens