In praise of an inspiring statesman 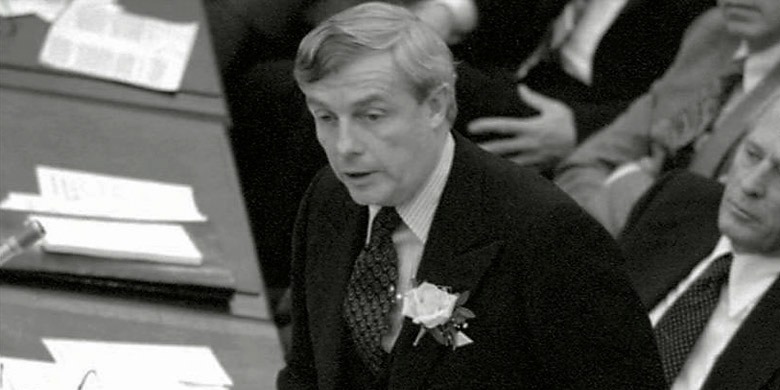 Anne McLellan was a federal Liberal politician, but found in Peter Lougheed a colleague from whom she could learn much about public service.

"When I sought his advice, Mr. Lougheed had been out of partisan politics for some time.  His interests were always focused on how to create a strong Canada and a strong Alberta. I had the opportunity to speak with him privately about things that were happening in Canada and Alberta, and he was always there to offer me his sage advice," she said. "He wanted Alberta to move from being a rural backwater to a modern sophisticated province, which it is today. To me he represents the very best of public service."

“He was a person who inspired others, in public and those with whom he worked,” says Oryssia Lennie, who for two years headed Lougheed’s correspondence division. “Peter felt very strongly about Alberta’s place in Confederation. He moved the province forward. He made the rest of Canada take notice.”

“He had a sense of vision and a certain kind of charisma,” says Lynne Duncan, a former visiting professor at the U of A who worked as a policy analyst at Alberta Treasury during Lougheed’s leadership.

“He was one of the outstanding three or four Canadian statesmen of the 20th century,” says James Edwards, who served as Lougheed’s communications adviser.

A vision for education

Peter Meekison, who worked with Lougheed for a decade, says the former premier enjoyed his time at the University of Alberta, where he honed his skills for public work by serving as a student leader in several capacities, including Students’ Union president.

“The education and experience he got at the U of A were relevant to his devotion to public life. His leadership qualities were very evident while he was a student on campus.

“One of his visionary acts was setting up the Alberta Heritage Fund for Medical Research, which helped put Alberta on the map and the discoveries benefitted people throughout the world. Part of the U of A’s leadership in health research now goes back to that vision,” says Meekison.

Edwards says the fund “in many ways transformed the U of A. It brought the Alberta medical school from a very competent regional school to a world contender. He was committed to making Alberta into an educated knowledge economy, and of course the U of A was a focal point for that.”

But Lougheed didn’t stop there. “As leader of his government, he made major investments in arts and culture,” says Lennie. “He had a huge regard for the U of A. He always felt strongly about his alma mater, spoke very fondly of the university and had a huge respect for its academic reputation.”

Duncan says that through Lougheed, Alberta had “the best student loan program in the country at one time, because he made sure that the money was available. It was a priority for him.”

“We made sure that we had the best possible universities that we could have and supported them very, very strongly,” says Don Getty, who succeeded Lougheed as premier. “We have a great education system now, with Peter’s leadership.”

"Premier Lougheed was a well-educated man who understood the value of education. Part of his vision for every Alberta young person was that they have the opportunity to get a good education," says McLellan.

Playing it fair from the football field to the legislature

At the U of A, Lougheed advocated reinstating football as a major campus sport activity and also played with the Golden Bears in 1947 and 1948, gaining experiences that stuck with him. “He very much believed in teamwork, going back to the time when he played football,” says Meekison.

“Peter always bounced ideas off cabinet players. He found out what members of the public were thinking. He was always very committed to ensuring that his caucus was involved in a decision—qualities he got from his early days as a team player,” says Lennie. “He approached his caucus like a team, but he was definitely the quarterback. He played to win, but played absolutely fairly.”

“He could draw people together to achieve a common goal,” says Duncan.

Edwards recalls a policy meeting in Banff, where Lougheed “introduced one of the most right-wing ranchers in Alberta history to a leader of a trade union. I was with the rancher when Peter brought him over to introduce the trade unionist, and the rancher said, ‘I’ve never met one of those fellows, Peter, I wouldn’t know what to say to him. And Peter said, ‘That’s the whole idea.’ He was a team builder with a capacity to bring people together—and that went back to his football days at Golden Bears.”

“He had an ability to bring about consensus,” says Lennie. “He was an extraordinary leader. Albertans and Canadians are better off today.”

In a welcome message to the freshman class of 1951, Lougheed wrote in The Gateway, “I urge you to take an active part in all activities during the Freshman Week and throughout the coming University year so that you begin your college life with the proper perspective in realizing that the purpose of the University training is not restricted to academic fields, but is concerned with graduating future citizens of this country, who will be adequately prepared to take their place in the community.”

That sense of citizenship, nurtured during his university years, helped Lougheed make national history. “He had a remarkable view of individual rights. His government brought in the first human-rights legislation in a Canadian province, the Individual Rights Protection Act,” says Edwards.

“It is also indicative of the kind of person he was that his first piece of legislation, upon becoming premier, was the passing of the Alberta Bill of Rights,” says McLellan. “He believed in the inherent dignity of every person and their right to be treated with respect."

“He brought in the program that we know today as Assured Income for the Severely Handicapped and he set up the Human Rights Commission,” Lennie says.

“Peter was very aware of the concerns that other parts of Canada might have with respect to Alberta’s growing wealth,” Meekison says. “He shared that wealth in various ways. For example, in the late ‘70s and ‘80s, grain cars were made in Hamilton, Ontario, which created jobs in that province. He was conscious that other parts of Canada would benefit from the wealth in Alberta.”

“His vision was for an Alberta that would provide leadership in the West and to the country—his commitment, integrity and memories of his accomplishments will live on the hearts of many of us and future generations,” says Lou Hyndman, who seconded Lougheed’s nomination to be leader of the PC Party of Alberta in 1965.

“We will keep our memories of him because so many things about Alberta remind us of him,” Getty says.

In praise of an inspiring statesman
Newsroom