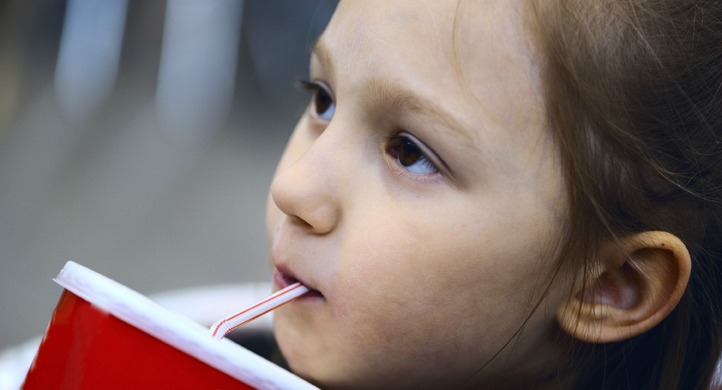 (Edmonton) Preschoolers from low-income neighbourhoods and kids who spend more than two hours a day in front of a TV or video-game console have at least one thing in common: a thirst for sugary soda and juice, according to research from the University of Alberta.

Researchers from the faculties of Physical Education and Recreation, School of Public Health and Medicine & Dentistry surveyed parents to assess the dietary habits of 1,800 preschoolers in the Edmonton region as part of a larger study on diet, physical activity and obesity.

Researchers found that 54.5 per cent of four- and five-year-olds from poorer neighbourhoods drank at least one soda per week—far more than the 40.8 per cent of kids from higher socioeconomic backgrounds. Preschoolers from low-income areas also drank less milk and consumed more fruit juice, which, like soda, is linked to rising sugar intake associated with childhood obesity.

“When you’re looking at that age group, and such a large percentage of very young kids in the study are consuming a large amount of soda, it’s quite concerning,” said study co-author Kate Storey, a registered dietitian and assistant professor in the School of Public Health.

“If you’re drinking a lot of soda and fruit juice, that can displace consumption of water and milk, which are important not just for quenching thirst, but for developing healthy bones and teeth, and health and wellness in general.”

The study, part of a larger project looking at nutritional habits of preschoolers, is among the first to gather data on children of such an early age.

“Dietary behaviour and intake patterns are influenced heavily by what happens in the first few years with children, and they maintain those patterns throughout childhood and into adolescence,” said study co-author John C. Spence, associate dean of research in the Faculty of Physical Education and Recreation.

“In addition to basic health education, this study identifies a need in how we’re dealing with poverty and recognizing there’s more to poverty than simply the number of dollars people have. Many families live in places that might not be very healthy for them and, as a result, they make unhealthy food choices.”

A companion study involving the same group of preschoolers also looked at the types of foods they ate and whether they followed recommendations in Canada’s Food Guide.

Researchers found that just 30 per cent of children ate enough fruits and vegetables, and 23.5 per cent consumed the recommended amount of servings of grain products. The same problem did not exist with milk and meat or alternatives—a respective 91 per cent and 94 per cent of kids ate recommended servings.

As with sweetened beverages, children from low- and medium-income neighbourhoods were more likely than kids in high-income areas to eat foods like potato chips, fries, candies and chocolate.

Those results presented an “alarming pattern,” said Spence, who suggests it is possible families are choosing high-calorie foods because they are cheap and convenient. But, he added, the neighbourhood itself could also be a factor in food choices.

“There are cities in North America where, literally, you have food deserts. If you wanted to go out and buy some lettuce and tomatoes, you’d have to travel very far—very likely without a car. You’re not going to do that every time you want to get some food, so maybe you’re going to resort to the convenience store down the road.”

At least one glimmer of hope is that children who attended daycare or kindergarten were significantly less likely to reach for junk. Storey said that illustrates how education can make a difference and lead to healthier eating habits, regardless of what’s happening at home.

“You can start making a difference in different places. It calls for action in multiple settings, schools and communities, for example. That light-bulb moment can happen in a variety of places.”

The studies were published in the August issue of Public Health Nutrition and the summer edition of the Canadian Journal of Dietetic Practice and Research.

The research was funded by the Heart and Stroke Foundation of Canada and Canadian Institutes of Health Research.