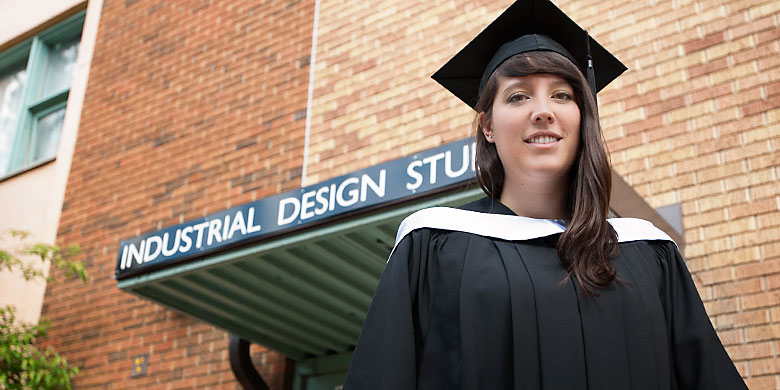 120613-erincochrane-banner
Erin Cochrane says the U of A's industrial design program allowed her to combine her passion for design and her love of shoes. (Photo: Richard Siemens)

(Edmonton) Erin Cochrane is unequivocal about two things in her life: she loves shoes and she loves making beautiful things. But her fascination for footwear is uncommon, because she’d rather design the shoes than wear them. Even as a teenager in high school, she was particular about the pairs of sneakers and basketball shoes she collected and displayed in her bedroom.

“I knew I was creative and artistic but did not want to be an artist,” says Cochrane, a graduand of the University of Alberta’s industrial design program. “I was always very interested in doing footwear and that’s why I decided to pursue industrial design.”

So she turned to the industrial design program—one of the most foremost in the country because of its approach to design education, its expanse and the number of successes by its graduates—where her passion for design and love for shoes were nourished. She says the results have been remarkable.

Those results include accepting employment with one of the world’s most famous footwear companies even before crossing the stage to receive her degree in industrial design. She now works at Nike, alongside some of the world’s best designers, to develop what she describes as high-performance sportswear for leading athletes. She has also created what Robert Lederer, industrial design professor, calls a valuable opportunity for other design students at the U of A. And a few weeks ago, Cochrane received news that a product she designed with two classmates, Rob Faulkner and Logan Frentz, has won an award at an international competition.

But she says she was able to do more at the U of A than simply develop her passions. “What I loved about this program is that it opened my eyes up to other things that I love besides footwear, such as medical modelling design. And that’s actually what got me into Nike, because I had the opportunity to do medical design here,” she says.

“I did some practicum work at the Misericordia Hospital’s Institute for Reconstructive Sciences in Medicine, and showed that work to Nike. They were very interested in it, just because it brings a whole different dynamic to sportswear and problem solving.”

Cochrane says a Nike official was so impressed by the medical projects in her portfolio, she was assured there will always be a spot reserved for any U of A industrial design student interested in interning with the company’s summer-school program, where she was discovered.

Her successes don’t end there. In July, the Industrial Designers Society of America will showcase a blood glucose monitor that she co-designed. The monitor, which she says was designed to fit seamlessly into the lifestyles of diabetic patients, won in the organization’s Idea Awards student category.

“It’s all pretty surreal,” says Cochrane. “Industrial design fit perfectly because I get to be creative and artistic and solve problems.”

The problem that Cochrane, Faulkner and Frentz noticed with existing monitors was their looks, so they decided there ought to be something better. “For young people who are diabetic, [it can be embarrassing] to check their blood glucose in public. We thought that there should be a better way of integrating monitors into patients’ lifestyles,” she says. “Our device is also designed to give more information, so that patients can learn more about why their levels are high or low and when that tends to happen.”

The U of A is the only university in Canada that has a medical modelling design component in its industrial design program, says Lederer—a feature Cochrane says was appealing to her. “The people at Nike were amazed with what we do here. They said ‘You do facial reconstruction in your program?’ People wouldn’t believe that we do things like that in this program.”

As friends and family join Cochrane in celebrating her graduation, Lederer will be reflecting on the program that has produced another exceptional graduate from its unconventional approach to teaching design.

“We encourage students to accept failure, so they’re able to explore more freely. If they fail in doing so, that’s not such a bad thing. Students are encouraged to experiment. We’re here to facilitate those types of passions,” he says. “Erin has always been interested in footwear and so, when we worked on projects, she would give a bit of footwear as a solution. By allowing students to pursue their passions, they learn more, they leave the program with a stronger sense of design and they can utilize design to further their own passion in the direction they want to go.”