Influencing Alberta and beyond 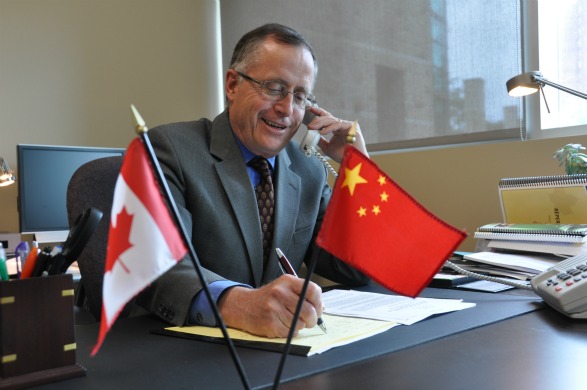 120511-gordonhoulden-banner
Gordon Houlden, director of the U of A's China Institute, has been recognized as one of Alberta's 50 most influential people.

(Edmonton) A recently published list of Alberta’s most influential people, compiled by Alberta Venture, shows the impact of the University of Alberta’s contributions to building and showcasing the province across the country and around the world.

From agriculture to business, energy to politics and engineering to culture, the U of A—through its graduates—is helping to make Alberta a better place. Twenty per cent of the 50 people on the list are connected with the university.

The magazine’s editors say the list shows a group of people “who may not be headline-makers or widely recognized names but who have had an undeniable—and an undeniably positive—influence on others.”

Among them are Michael Casey, president and chair of the Calgary Stampede; Stan Blade, CEO of Alberta Innovates Bio Solutions; Clif Purvis, who directs the Alberta Serious Incident Response Team; Simon O'Byrne, whom the editors say “has long been one of Edmonton’s most prominent and vocal planners”; and Kevin Swan, recognized for helping to fund startup tech businesses in Alberta.

“It’s nice to recognize people who may not always get recognition, and who certainly don’t go around seeking it, but who deserve credit for making Alberta a better place to live,” the list’s editors write.

Karina Pillay-Kinnee is an example of those who don’t seek recognition for her work, but the world has seen her work in Slave Lake. Thanks to her leadership as mayor, the editors note, “Slave Lake is recovering, and even thriving” from a wildfire that engulfed that city.

Other U of A alumni helping Alberta to flourish are John Wright, a leader in the province’s energy sector; Casey Hudson, a programmer with leading gaming company Bioware—established by two U of A medical students—and Jane Halford, CEO and executive director of the Institute of Chartered Accountants of Alberta, and president of the U of A Alumni Association.

The university’s impact also stretches beyond Alberta’s borders, fulfilling its commitment to global citizenship. Gordon Houlden, director of the U of A’s China Institute, says a phenomenon, a culture and a country are growing in Asia that are too important for Alberta to ignore. The Alberta Venture editors agree, noting “Alberta’s economic future depends in part on its growing relationship with China, and there are few people that understand that better than Gordon Houlden.”

“What I’ve tried to do, since being appointed as director, is to be a voice of the importance of China to Alberta and Canada,” Houlden says. “I try to speak on issues that involve China, which increasingly is a wide range—economic, political and cultural—and articulate for Albertans and Canadians the reality of China that would affect our lives and those of our children in a very substantive way.”

Houlden does that not only with the provincial government but also with the federal, where he served for three decades in various capacities in Asia. For example, earlier this month, he taught a course in Ottawa for Canadian diplomats and other federal officials on modern China and the opportunities and challenges it presents for the federal government and Canadians.

When the provincial government needed to formulate a strategy to diversify energy export to China, Alberta Energy turned to the institute for assistance. Houlden says the institute’s report is instrumental in shaping the province’s energy policies.

Two years ago, the institute rose to the occasion to observe the 40th anniversary of diplomatic relations with China, which was attended by Prime Minister Stephen Harper. A recent meeting brought international experts to the U of A to address questions on the South China Sea and the Canadian Arctic. Along with an official in Foreign Affairs and International Trade Canada, Houlden leads Focus on China, a national program to co-ordinate and advance understanding and opportunities for Canadian universities and colleges in China.

Houlden’s place on the list won’t surprise China’s ambassador to Canada, who attended a recent meeting by the institute that brought representatives from various sectors to Calgary to work on ways of strengthening intercultural growth, economic development and exchanges between China and Canada. Ambassador Zhang Junsai said he had come partly to thank Houlden personally for his role in strengthening ties between the two countries.

China’s current investment in Alberta is $15 billion and growing, China is Canada’s second largest trading partner and it has a keen interest in Alberta’s high-quality export on beef, Houlden says. But he cautions that more needs to be done.

“I don’t believe that we’re growing our cadre of people knowledgeable of China anywhere near the rate that we should,” he says. “Governments have great operational capacity but universities, such as ours, can provide analytical capacity which governments lack. I’d like to think we’d continue to play an active role in facilitating these contacts, even though the government has already seen the importance of China.”

Influencing Alberta and beyond
Newsroom