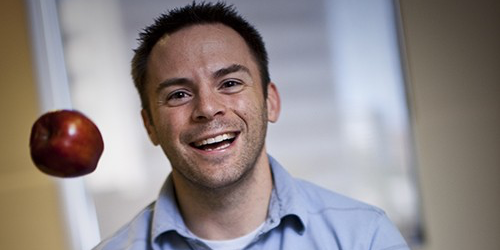 Geoff Ball looked at 59 studies of various trendy diets and found that all could help people lose weight, if the recommendations were followed.

(Edmonton) There are hundreds of diets that promise waist and weight reduction with mantras of low fat, low calorie or low carbohydrate. Atkins, Weight Watchers, Jenny Craig, South Beach—the list goes on, but does one yield better results than the others?

Geoff Ball, an obesity expert in the University of Alberta's Faculty of Medicine & Dentistry, along with Edward Mills (Stanford University), Bradley Johnston (University of Toronto) and their team set out to answer this question with a new publication in the Journal of the American Medical Association. The study was funded by a Canadian Institutes of Health Research grant, with Ball and Mills listed as co-principal investigators.

“Our analyses showed that, regardless of which diet people were on, if they were able to adhere to the diet recommendations, they were able to lose weight,” says Ball, an associate professor of pediatrics and the director of the Pediatric Centre for Weight and Health at the Stollery Children’s Hospital.

Their systematic review and meta-analysis examined 59 studies published between 1998 and 2013. Each study took place over 12 months with an average of five to eight per cent weight loss in patients, which is significant enough to yield clinically meaningful improvements in health factors such as insulin resistance and blood pressure.

Ball notes that an important aspect to their review is that he, Mills and their team have no professional or financial affiliations with any of the diet programs, which lends credibility to their work.

“This is a very dispassionate kind of academic exercise in that sense. There’s no emotion. It’s really about what the evidence says.” Ball adds that there is often a perceived or real conflict of interest when research into the effects of different commercial diets includes individuals with a stake in a weight-loss program.

More precisely, multimillion-dollar studies are underway in the United States to identify whether one eating plan is superior to another, to help adults with obesity lose weight and maintain their weight loss. But based on the evidence so far, differences between diets that vary in fat, carbohydrate and protein appear minimal. Because all of the diets produce similar results, Ball says, it’s up to patients to choose the plan that is best suited to their lifestyle.

“If people can adhere to it—and that’s the real challenge across any kind of diet program—then it’s likely going to help individuals to achieve some weight loss,” he says. “I think that’s the take-home message.”