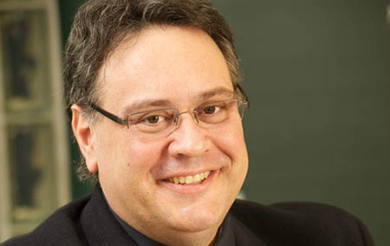 (Edmonton) Cardiology researcher Evangelos Michelakis is sure a lab dedicated to unravelling the mysteries of mitochondria is the next step in formulating treatments for deadly pulmonary hypertension, and the federal government agrees.

Michelakis’s proposal for a Mitochondria Research Unit heads a list of 12 University of Alberta projects that have been earmarked for more than $2.6 million in infrastructure grants from the Canada Foundation for Innovation’s John R. Evans Leaders Fund.

“At this point, in terms of infrastructure, faculty and students, the U of A competes with the best universities in the world,” said Michelakis, Canada Research Chair in Molecular and Mitochondrial Medicine and researcher in the Department of Medicine. “The great thing about the university is the more you look, the more you’re surprised about how much depth there is. It is that depth—depth of faculty, depth of infrastructure—that allow researchers to go deep in science.”

He adds that plunge requires collaboration and a lot of infrastructure, particularly during difficult economic times when resources are restricted.

What Michelakis is proposing is a space dedicated to taking a closer look at mitochondria—the cell’s “powerhouses” responsible for the creation of a cell’s energy and the organelle that controls cell growth. This means, when mitochondria sense cells are overgrowing, they engage in a process known as apoptosis, or cell suicide.

What interests Michelakis about mitochondria is that their functions are suppressed in people who suffer from pulmonary hypertension (high blood pressure in the lungs) and cancer.

He says this suppression is paradoxical given that pulmonary hypertension is caused by unremitting cell growth in the lungs that eventually occludes blood vessels, which is the cause of the high blood pressure.

In holding the mitochondria’s vital cell-monitoring role in check, Michelakis says, these proliferating cells are able, as are cancer cells, to seek out other sources of energy, typically in the cytoplasm, while warding off apoptosis.

“This unit is critical for the kind of work that we’ve been doing, and exploring this mechanism is the basis for the discovery of novel drugs,” said Michelakis, whose new lab would be outfitted with a device able to measure the function of up to 96 mitochondria samples in parallel.

Actually receiving the CFI funds now depends on the success of a larger grant, which includes obtaining matching provincial funds and lining up a certain percentage of in-kind contributions.

"CFI's investment will help the University of Alberta continue strengthening its research excellence and infrastructure, which in turn will help further Canada’s research capability, intellectual capital and global competitiveness," said Lorne Babiuk, U of A vice-president of research. "I thank CFI for their generous support and congratulate our researchers. The knowledge and advances resulting from this research investment will benefit not only the university, but also Canadians and the global community."

The Canada Foundation for Innovation has renamed its Leaders Opportunity Fund in honour of John R. Evans, the foundation’s first board chair. Created by the Government of Canada in 1997, CFI strives to build Canada’s capacity to undertake world-class research and technology development by investing in state-of-the-art facilities and equipment in Canada’s universities, colleges, research hospitals and non-profit research institutions.

Nicola Cherry
A mobile clinical research laboratory (MobLab) for use in community-based research. $255,521