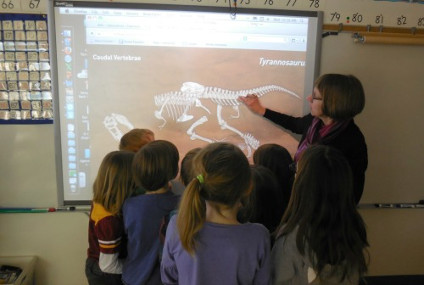 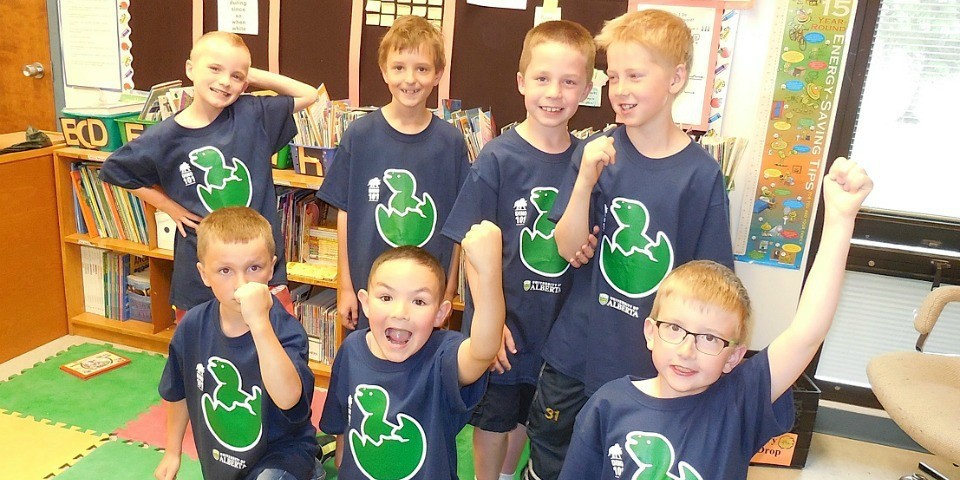 (Edmonton) A group of young paleontologists in the making kept University of Alberta graduate students Betsy Kruk and Tetsuto Miyashita on their toes this week at a special event celebrating the photographic efforts of their teacher.

“It was a terrific afternoon. The kids' enthusiasm overwhelmed us, far above an average school group,” said Miyashita after the Wednesday presentation to Dolores Andressen’s classroom.

Andressen’s photo of herself projecting the U of A’s massive open online course Dino 101 onto a SMART Board, while teaching her Grade 2 and 3 students about dinosaurs, won first prize in a recent contest run by the University Digital Strategy team.

The contest was open to any student registered in Dino 101 and attracted entries from all over the globe, but it was Andressen’s photo that caught the judges’ attention. They had no idea the entry had come from close to home—St. Albert’s Bertha Kennedy Catholic Community School.

“This photo represents an innovative use of Dino 101 and the passion that we can instil in our next generation of scientists for this incredible research area,” said Jennifer Chesney, associate vice-president of digital strategy. 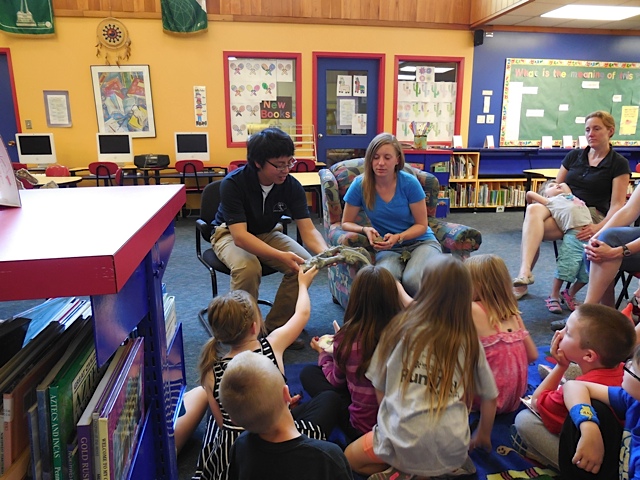 Tetsuto Miyashita and Betsy Kruk put on a show-and-tell for the class.

Miyashita and Kruk, an instructor of Dino 101, visited the classroom to present Andressen’s students with special Dino 101 T-shirts, a dinosaur show-and-tell and a personal letter from Dino 101 lead instructor and world-renowned paleontologist Philip Currie congratulating them on their enthusiasm for the topic.

In his letter Currie said, “I was not much older than you are now when I decided to become a paleontologist, so I know how important it is to find your interests early in life. You are so lucky to live in Alberta where we have so many great dinosaur localities, specimens and museums.”

Andressen said the afternoon was a huge hit with her students, who have spent months studying dinosaurs, visiting exhibits and coming to the U of A to learn about the ancient creatures.

“The highlights for the students were meeting Betsy after seeing her on the screen, seeing Tetsuto again after our tour in February of the biological sciences lab, feeling the specimens that they brought along to be passed around, and hearing Betsy and Tetsuto’s stories from when they were the students' ages and were first interested in dinosaurs,“ said Andressen.

“I think there was an overall feeling of appreciation and excitement that comes with talking with some very knowledgeable paleontologists,” she added.

Dino 101 has just wrapped up its second offering and will be open again for registration in September 2014. More than 33,000 students have registered for Dino 101 since it launched last year.