With China investing some $80 billion in Canada’s economy—62 per cent of which is in Alberta—understanding the Asian powerhouse is crucial, says China Institute director. 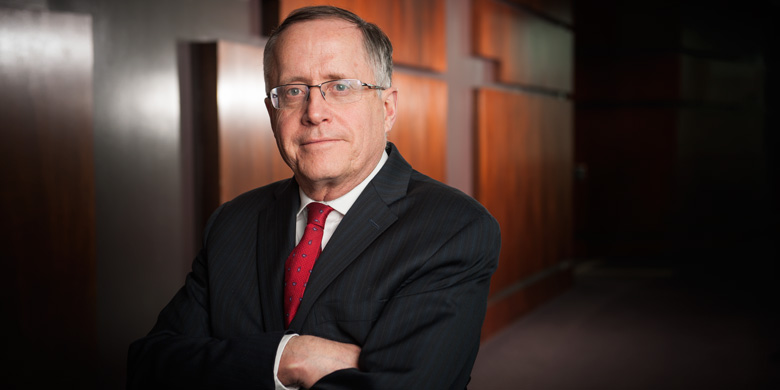 Gordon Houlden, director of UAlberta's China Institute, says he wants people to have a nuanced understanding of China, rather than a two-dimensional, stark, pro or anti view.

It’s hard to believe, but 10 years ago there was no way to tell how much China had invested in Canada.

Even Statistics Canada and the Chinese Ministry of Commerce couldn’t provide accurate figures, according to Gordon Houlden, director of the University of Alberta’s China Institute.

“People would either vastly overestimate investment, accusing the Chinese of single-handedly distorting the market, or they would say it's an absolutely minimal factor when it was clear investment was substantive,” he said.

“If you don't have the data, you can't come up with sensible policy," because it will inevitably be skewed by misconceptions, he added.

Determined to fill this information gap, the China Institute set about collecting investment data as one of its major tasks, employing the research skills of savvy graduate students.

“We painstakingly, and at some cost, have built up an inventory of Chinese investment using the talents of this university, updated on a deal-by-deal basis,” said Houlden.

As of this month, China has about $80 billion invested in the Canadian economy, about 62 per cent of that in Alberta, mostly in the energy sector but steadily diversifying into other sectors. And that doesn’t include residential real estate, which is difficult to track precisely but likely worth a few billion more, said Houlden.

"Our work on Chinese investment has been really important, helping shape the public dialogue,” he said. China is, after all, one of the most powerful economic forces in the world; understanding and nurturing our trade relationship with this growing behemoth is crucial for Canada’s economic health.

“Particularly in an era where people are concerned about fake news, if we can back up our views with numbers, particularly on the trade side, or with historical accuracy when it comes to tricky issues on North Korea, it helps our credibility,” Houlden added.

Shaping the views of Canadian diplomats

Tracking investment is just one of many initiatives the China Institute has undertaken since it was founded in 2005. Its mandate includes “all things Chinese,” said Houlden, but its central focus is policy issues, whether in security, foreign policy, or economy and trade. The Alberta and federal governments—which pay a yearly subscription for information and training—are among its main clients.

“When the federal government wants to train diplomats, they come here—that’s noteworthy,” said Houlden. “We've helped shape the views of a new generation of Canadian diplomats.”

The institute is funded mainly through an endowment, created when the Alberta government matched a $37-million donation of art and textiles to the U of A by Cécile and Sandy Mactaggart. The Mactaggart Art Collection—one of the finest in the world—is housed beneath the institute’s offices in the Telus Centre.

Though the institute has become one of Canada’s leading think tanks on China, “It's a bit like pushing a boulder uphill,” said Houlden. “When people think of Chinese expertise internationally, they don't think of Canada first, and nationally they don't think of the U of A first—they think of UBC or U of T. That's the assumption we want to break."

Changing that perception means public outreach, including a lot of media, at least weekly, from Canada, the United States, Europe and China. Those media requests have been steadily increasing, said Houlden, averaging more than 80 a year.

"China is a very complicated place, and we want people to have a nuanced, shades-of-grey understanding as opposed to the two-dimensional, stark, pro or anti view. Those always make me nervous. China has wonderful things about it and not-so-wonderful things on any given day, just like anywhere else."

Lately Houlden—a career diplomat who spent 22 of his years in the Canadian foreign service working on Chinese affairs for the Government of Canada—has been sharing his thoughts on trade, a hot topic in light of U.S. President Donald Trump’s protectionist policies largely aimed at China.

Two-thirds of the U.S. trade deficit—roughly $350 billion—is with China, said Houlden. But China is no easy target, as Trump would like to assume with his recently announced tariffs on steel and aluminum.

“There is probably not a single U.S. Fortune 500 company that doesn't have an interest in China,” said Houlden. “In a good year, GM builds more cars in China than the United States, so there are a lot of retaliatory measures that China can take."

As for Canada, Houlden said the right free trade deal with China could be good for both partners.

"Is a free trade agreement good or bad for Canada? I would say show me the agreement," he said. "On balance I would be in favour of the right deal, because we're more dependent on trade than is either the United States or China.

"It’s pretty much a proven point that freer trade increases trade, especially when you can exchange goods with a country that has a very different profile from us—that’s certainly true of China.”

But when it comes time to put ink to paper, human rights could be a deal-breaker in any free trade negotiations with China, said Houlden. He believes it’s one area where the Chinese government will not make concessions beyond lip service.

“Even if you put human rights provisions in the agreement, China is not going to make a trade deal with a small foreign partner forcing them to do things they don't want to do."

Such provisions might sell in Canada, he said, but would have absolutely no teeth in China.

One thing is certain: China’s power and influence will continue to rise in the coming decades and Canada can only benefit from understanding it better.