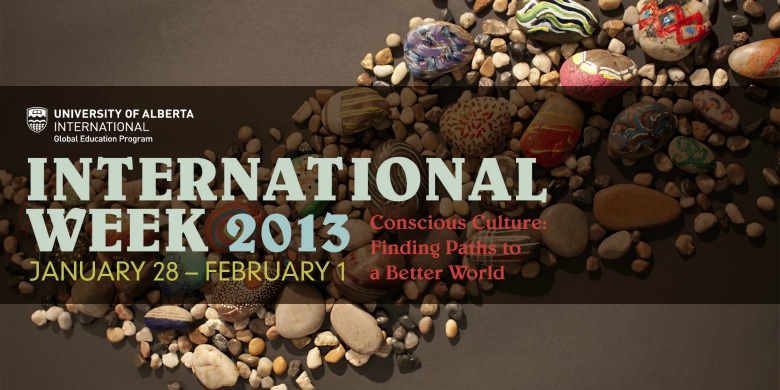 130125-internationalweek-banner
During International Week 2013, UAlberta is the ideal place to explore opportunities and challenges that arise when cultures meet and merge.

(Edmonton) The increasing interaction of cultures presents as many opportunities as it does challenges. And with that growth in shared cultures, universities have a responsibility to turn seeming problems into opportunities to build a stronger global community, says a University of Alberta vice-provost.

“Dealing with cultural diversity, clashes and loss of cultural identity—all the various dimensions of culture in a multinational and cultural environment—is not solely the responsibility of governments,” says Britta Baron, vice-provost and associate vice-president (international). “Governments’ tools to deal with these issues are relatively limited; this has to be also the responsibility of civil society. And universities, as an important part of civil societies, are very well equipped.”

Through International Week 2013, the U of A is fulfilling its responsibility to help find answers to a pressing global issue—the outcomes when cultures meet and merge. Baron says the more than 50 events happening from Jan. 28 to Feb. 1, including films, theatre performances, presentations and panel discussions, under the theme of “Conscious Culture: Finding Paths to a Better World,” are examples of how the university is contributing to finding solutions on global issues through teaching, learning and research.

“We see the risk of the global arena being exclusively determined by economic and political discourse and we see the risk that the cultural discourse is not given the necessary relevance and importance that it has,” Baron says. “We want to create awareness on the role of culture in a globalized world and we want to underline how this could be a very positive and constructive role. But we know it is at the same time a very difficult and potentially very destructive role, when cultures clash and when people cannot come together in agreeing on the variety and diversity of cultures that are part of their environment.”

One of the most significant global changes this year’s I-Week will explore is the rise of China on the world stage. Martin Jacques, who argues that this century will see the birth of a new global world order, will deliver a keynote at Myer Horowitz Theatre during the formal launch Jan. 28.

“The projections are quite extraordinary. China is set to overtake the United States in terms of its economic rise by around 2018. Its relative economic rise vis-a-vis the U.S. has been accelerated by the western financial crisis. By 2030, China’s GDP, at least in terms of purchasing power parity, will be around a third of the world’s GDP, and the U.S. share will be about half that,” Jacques says.

“We’re moving with great speed into a world that is entirely different from anything we’ve known for the last 200 years. Under those circumstances, one concludes that there will no doubt be ups and downs and glitches, problems and crises, probably. This is one of those great historical changes which are remorseless. It’s going to happen and no one is going to be able to stop it,” he says.

Another world-changing phenomenon will be the topic for keynote speaker Robert Fisk, who will lead a discussion on his lecture, “Arab Awakening: Are We Hearing the Truth?” the evening of Jan. 31 at Tory Lecture Theatre 11.

The week’s many events, organized by the U of A’s Global Education program, address a wide range of issues, from uses of social media and the role of women in reducing poverty to sustainable food security and ways of breaking cultural boundaries. And with a new free I-Week app this year, participants can easily check the schedule, get updates and share photos.

Baron says there is no better place to hold such timely discussions.

“We’re an internationalized place. More than 40 per cent of our educators come from abroad, and we now have about 6,000 international students. The university is the ideal place to raise awareness on global issues.”