Choreographer works with cast of upcoming U of A Studio Theatre production to ‘create safe spaces where dangerous things can happen.’ 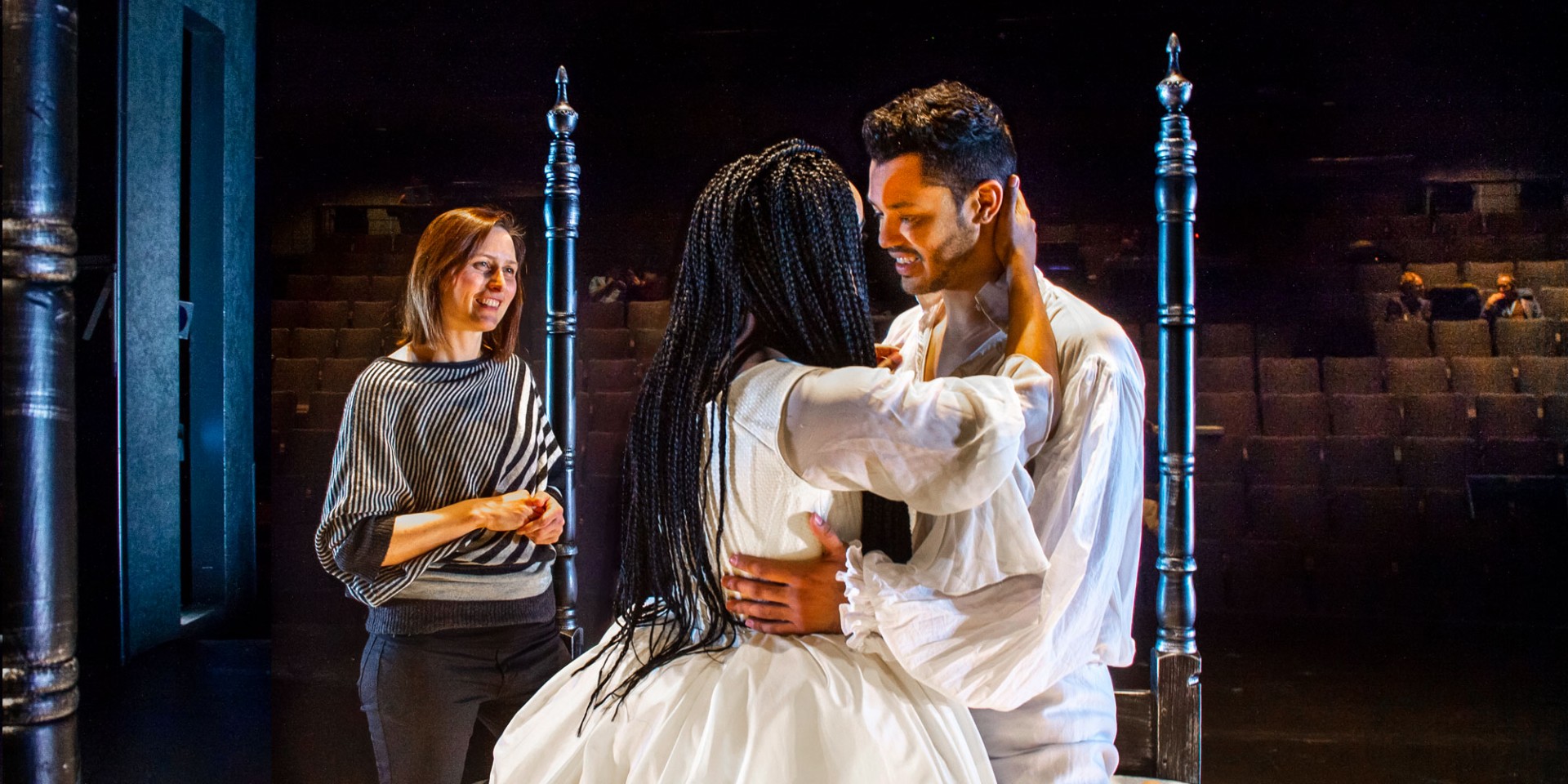 Intimacy director Janine Waddell (left) guides U of A drama students Helen Belay and Diego Stredel as they rehearse a crucial love scene in the upcoming Studio Theatre production of John Dryden's "All for Love." (Photo: Richard Siemens)

Towards the end of John Dryden’s play, All for Love, there is a scene in which Antony and Cleopatra declare their love for each other as they near death.

In the University of Alberta’s Studio Theatre’s production of the play, opening Thursday, the actors are expected to demonstrate those feelings physically.

There was a time not long ago when actors might have been left to their own devices to make such passion look convincing, without it getting awkward, triggering uncomfortable emotions or crossing the line of consent.

But there is a new breed of director on the rise in the theatre world guiding actors safely through scenes that can sometimes feel dangerous. Meet the intimacy director.

This winter, local combat director Janine Waddell has been choreographing student actors through All for Love’s crucial love scene. Working with renowned director Peter Hinton, she is there to make sure consent is clear in every move.

She treats such scenes like dance—“pure movement,” divorced from the context and motivation of the scene, she said.

U of A drama student Helen Belay, who plays Cleopatra in All for Love, had never before worked with an intimacy director, but is now convinced of its value.

“Now, because of Me Too, people are allowed to come forward and give it a name, and heavily advocate for it," she said.

"It's nice as a young artist to be given these terms now, so when I enter the professional field I know what I can ask for, and how to describe my needs in a way that’s clear and concise. That's very empowering."

Waddell confronts any hint of danger in a scene right off the top, before the rehearsal process even begins. Cast members will discuss which parts of the body are “available” for touching, and which are off limits, or “no-fly zones.” And she is careful to avoid charged words when directing.

“I won't say, for example, ‘Caress his arm.’ I'll say, ‘Take the palm of your hand, place it on his elbow with a pressure of three, and draw a line with your palm to his shoulder.’”

“It's very clinical,” she said. “The idea is to forget why our bodies are moving in this way.”

The principal director will then jump in to explain why the movement is necessary to reflect the character’s motivation. If cast members are the least bit uncomfortable, Waddell calls for a break to find a way around it.

"What's exciting is these actors knew how to use me, in ways they wouldn't have even a year ago,” said Waddell. “They've heard enough press about Me Too and asked enough questions that they've educated themselves."

While she deals with difficult emotions every day, she is quick to stress that she’s not a counsellor. But she does make sure cast members know where to find support on campus should they need it, referring to the university’s Sexual Assault Centre.

The presence of an intimacy director isn’t just about avoiding trauma. It can also make for a better quality production overall.

"What I'm hearing from directors is that actors are taking bigger risks,” because the safety net gives them licence to go places they may have been reluctant to go.

The demand for the role of intimacy director on set has been growing rapidly, especially since the #MeToo movement. Intimacy directors or consultants are now found everywhere from small-scale community theatre to big-budget productions at HBO and Netflix.

In fact, HBO announced last fall that all sex scenes will be staffed from now on with an intimacy co-ordinator, after piloting the process on its series, The Deuce.

And yet, two years ago there wasn’t really even a name for what Waddell does, she said, at least not one she was aware of. Nor was there a professional community of others like her, even though she’d been doing it on her own for years.

Waddell herself was just 15 when she performed in her first sex scene in a high-school play.

She wore a bodysuit, but there was no direction; the actors were expected to figure it out on their own.

“Literally, it was like, ‘Just get in bed and make it look like sex,’” she said. “That was really common, and normalized at the time."

While it felt awkward, Waddell came through the experience relatively unscathed, she said, mainly because her male companion was “a gentleman,” sensitive to her comfort level.

A few years later she wasn’t so lucky. This time she was in a play that featured a rape scene.

"We started working it out in rehearsal, and then one night the actor who was supposed to intervene didn't enter, so we had to keep going—I was kind of assaulted on stage."

It wasn’t the kind of thing you could easily talk about as a young actor in the theatre world without being seen as complaining or difficult, she said. But she knew depicting intimate scenes with conviction shouldn’t have to feel like a violation.

Fast forward a couple of decades, post-Me Too, and Waddell is now highly sought after for what she brings to the rehearsal process.

About three years ago, Waddell found a community of like-minded professionals in the form of Intimacy Directors International (IDI), a company started by three women.

“Just the idea of saying ‘I have colleagues’ almost brought me to tears,” said Waddell. “It was so exciting. Somebody else in the world was doing the same thing.

"Almost every intimacy director I've talked to has backstories similar to mine. We had all been in a position where people weren't helping to keep us safe. And we didn't feel we had the authority or privilege to keep ourselves safe. There was no way to dialogue about it."

She also discovered that about 95 per cent of her process lined up with IDI’s guidelines, which the company had been developing for certification of its members.

In Waddell’s own case, choreographing intimacy grew quite naturally out her background first as a dancer, an actor, and then as a stage combat director, since many fight scenes would also involve domestic violence or rape.

“I have yet to meet an intimacy director who doesn’t also do fighting,” she said, adding that combat and sex have similar choreography.

The mantra of her profession is "better to create safe spaces where dangerous things can happen than dangerous places where only safe things happen."

Waddell said it’s heartening to witness “a positive manifestation coming out of something that was really negative” in the wake of Me Too.

"I feel like a lot of people lost their map. When Me Too happened it was like, ‘Well, what do we do now?’ This is one way to offer a path, a solution to the problem.”