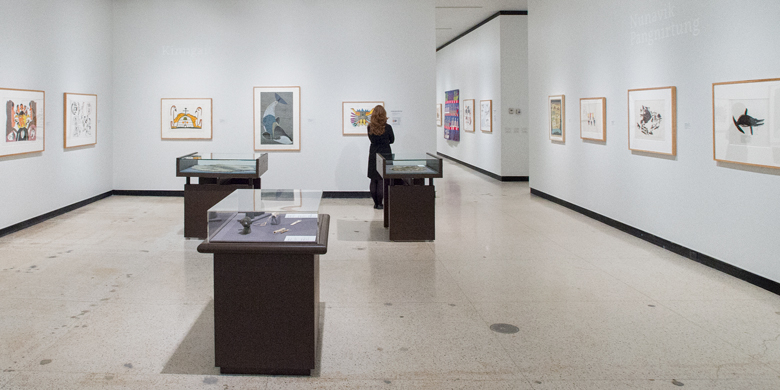 131105-inuit-exhibit-banner
The Sanaunguabik: Traditions and Transformation in Inuit Art exhibit is on display until Dec. 21 at Enterprise Square Galleries. (Photo: Richard Siemens)

(Edmonton) There are few cultural objects as distinctly Canadian as a work of Inuit art, recognized around the world for its character and beauty.

Now, for the first time, the University of Alberta is exhibiting its extensive collection of Inuit art amassed over five decades in a show called Sanaunguabik: Traditions and Transformations in Inuit Art.

On display at Enterprise Square Galleries until Dec. 21, the exhibit contains almost 100 works by 65 artists—mostly prints but also some textiles, sculpture and film. It is meant to show the development of Inuit art in six regions of the Arctic over the past 65 years, says assistant curator Matthew Hills.

“The great thing about having this space in Enterprise Square is we can finally show it off,” says Hills. "We've collected primarily Inuit prints, one of the most prevalent forms of printmaking in the country. In Edmonton there is a real passion for Inuit art, there are organizations that are committed to it, and Edmonton has the third-largest Inuit population outside of the Arctic.”

Inuit printmaking was born as Northern communities underwent radical transformations in the 1950s, turning away from a migratory life of hunting and trade to one of settlements grounded in a monetary economy. Partly to stimulate economic growth, northern service officer James Houston opened a one-room crafts shop in Cape Dorset that would become the first printmaking co-op in the North.

That studio, in what is now called Kinngait, is considered the centre of the Inuit printmaking movement, producing a series of exceptional artists over the years and inspiring more across the Arctic, many of them women.

"It's a very patriarchal culture, but the studio movement provided opportunities for women to find expression and be financially independent to a degree," says Hills. “And you see that in contemporary art, young women reflecting more deliberately on femininity and the role of women artists."

The most iconic artist of this female cohort is Kenojuak Ashevak, the matriarch of Kinngait printmaking who became famous after creating The Enchanted Owl, which appeared on a 1970 Canadian postage stamp.

Another Kinngait artist, Pitseolak Ashoona, produced more than 7,000 drawings in 25 years, but is also famous for producing children and grandchildren who went on to international stardom as artists in their own right. Because of her prolific output, Ashoona is the most represented artist in the U of A’s collection with some 65 works.

Technological determinism plays a big part in the birth of Inuit printmaking, says Hills. Paints, for example, freeze and can't be easily sourced, whereas inks are much easier to acquire.

“And one thing about the studio is that it's a centralized location that's heated—it's a place for the community to come together,” he says. “It's one resource that can be cared for by the group."

Sanaunguabik highlights the work of artists in six co-op studios in the Northwest Territories, Nunavut and Nunavik. Some of the more prominent include Myra Kukiiyaut, Jessie Oonark, Kananginak Pootoogook and Marion Tuu’luq.

"I want people to be aware of the diversity of Inuit art, and that it's a really active field for printmaking,” says Hills. “But I also want people to come away with an impression of the resilience in Inuit culture.

“The ‘50s were a really rough time, with famine and economic hardship, during which large numbers of people were wiped out. So to persevere and create beautiful art, full of joy and humour, is amazing. It's from people who traditionally didn’t have a voice, finding a voice."

As part of the programming for the exhibit, U of A Museums will screen Kinngait: Right Light Into the World, a documentary film on the history of Inuit art, Nov. 6 at 7 p.m. at the Metro Cinema.