People expect I was born in an igloo and grew up eating whale blubber, so I always disappoint them by telling them the truth. 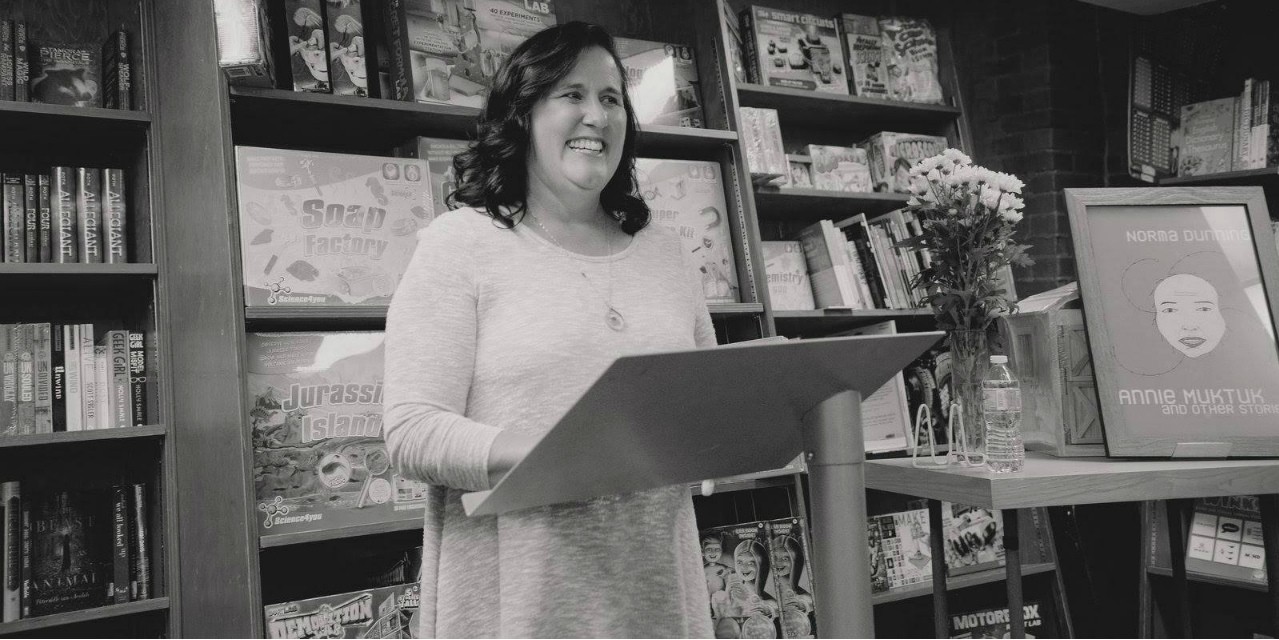 Norma Dunning reads from "Annie Muktuk and Other Stories," which earned her the $10,000 Danuta Gleed Award for the best first collection of short fiction by a Canadian author published in English. (Photo: Shawna Lemay)

They might not ask these questions out loud, but Norma Dunning knows some people wonder why she doesn’t fit their expectations of Inuit.

"If someone says, ‘I'm Dutch-Canadian,’ we don't all look at them and say, ‘Where are your wooden shoes?’ People expect I was born in an igloo and grew up eating whale blubber, so I always disappoint them by telling them the truth."

And yet Dunning is making a career out of telling her truth—one as complex and full of uncertain, shifting identities as anyone’s, Indigenous or not.

The University of Alberta doctoral student in education recently won the $10,000 Danuta Gleed Award for the best first collection of short fiction by a Canadian author published in English, for Annie Muktuk and Other Stories. She was also a finalist for the Robert Kroetsch City of Edmonton Book Prize last week, which was claimed by another U of A doctoral student, Billy-Ray Belcourt.

Many of Dunning’s characters struggle with the paradox of preserving traditional Inuit culture while confronting the realities of modern life.

Her mother’s side of the family is from Whale Cove, Nunavut, and four of her siblings were born in Churchill, Manitoba. But Dunning herself has never even been to the far North. She was born in Quebec after her father joined the military.

Given her father’s profession, the family moved often, living in remote Quebec locations inaccessible by car, so she spent much of her time reading, and writing poetry and fiction.

"I think I was fortunate to grow up in a time when you read books,” she said. “We had a TV, but my father was wary of it. He would say, ‘If you watch that all day long, your eyes will go square,’ and we believed it.”

Dunning can’t remember a time when she didn’t write. Most of it ended up in a drawer once finished. As a young woman, she missed the chance for higher education and opted instead to raise a family.

It wasn’t until she was 50 and her son was applying to college that she decided to pursue her first degree, a bachelor of Native studies at the University of Alberta. It’s also when she went back to that drawer to resurrect characters and stories, and ended up winning two undergraduate writing awards.

That was eight years ago. She is now pursuing a doctorate in education in the Indigenous Peoples Education program while garnering national attention for her creative writing.

Throughout her work—whether in academic research or fiction—she unapologetically skewers flawed notions of Indigenous authenticity.

“We still have these conceptions, especially with Aboriginal Canadians, that we cannot be modern-day people. I get it all the time, but we are not chewing caribou any more."

Her doctoral research examines how Inuit post-secondary students learn to navigate their way through university, given prevalent misconceptions in the academy.

"The mainstream perception is that all of our university education is taken care of, that we get tuition and cost of living and all of our books free, and it is not at all like that,” she said. “I also talk to students about the perceptions they have dealt with in a university setting.

“When you identify as Indigenous, what happens to you in that classroom? Because now you're different. How do professors or other students approach you, how are you graded, how do you become a commodity?”

Her short stories take a different approach to interrogating Inuit identity. With characters like Annie Muktuk, Dunning uses humour to expose the complex intersection of the traditional and contemporary Indigenous life, always upending expectations of what that life should look like.

"I think that's part of being Inuit—we grow up within that laughter,” she said, confirming the fact with her own frequent and contagious guffaws that come straight from the belly.

“Things are hard, but you can still laugh. That was something my mother taught me. She could always laugh no matter what."

As real and three-dimensional as they may seem, Dunning insists the characters in the Annie collection are not drawn from people she has encountered in real life. In fact, they quite literally have a life of their own, she said.

“It sounds crazy, but I can actually see my characters. They appear like a flash, and they stay with me. I have to write those stories or the characters never leave my apartment.

“I'm not making that up,” she said, the laughter exploding again. “They won't leave until I finish—they take over my life."

To receive national recognition for the exploits of these characters is “just beautiful,” she said. But Dunning hesitates to take full responsibility. The credit should go to Annie, she said, the principal character in her stories.

“I'm so grateful for Annie. I've raised boys, so Annie is my girl."