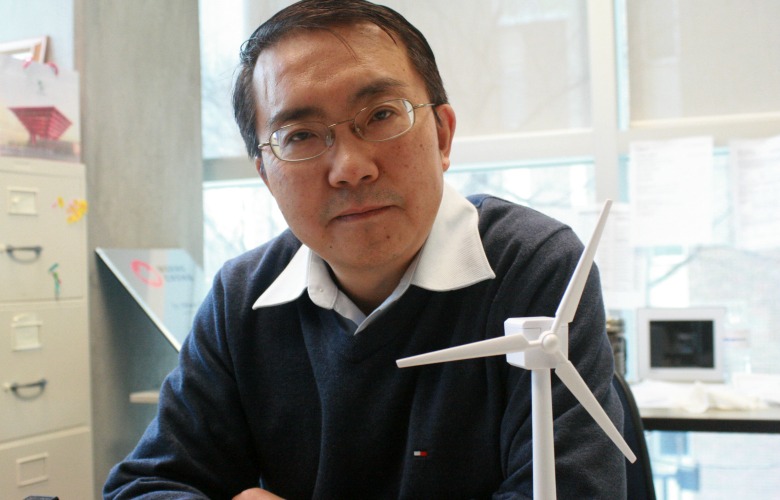 131220-wilsun-xu-banner
Wilsun Xu invented a fail-safe device that makes it cheaper and safer for renewable-energy companies to connect to existing power grids.

(Edmonton) An invention by electrical engineering professor Wilsun Xu has been licensed in the private sector and could prove to be a powerful enabling technology that results in more renewable-energy producers contributing to existing electrical power grids.

Until now, independent energy producers operating wind or solar power generation plants had to invest at least $800,000 in technology that allowed them to connect to power grids. The device Xu invented drives that price down to between $80,000 and $5,000 and ensures a safe environment for power workers.

The device has been patented and licensed through TEC Edmonton to DX3 Enterprises, based in Sherwood Park, Alta.

Xu, who holds the NSERC/iCORE Alberta Power Companies Senior Industrial Research Chair in Power Quality, worked for about a decade on the “anti-islanding” technology. In an emergency such as power lines being knocked out by a wind or ice storm, the device automatically shuts down power flowing from independent producers, preventing the formation of “islands” that still have power.

Electrical providers need to know that any independent producers are no longer transmitting power through lines being repaired. Lives are at stake, as is infrastructure.

Xu’s device is a sensor that acts as a sentry, constantly monitoring the power grid. As soon as there is an interruption in power, it automatically shuts down the flow from independent operators contributing power to the grid.

“It’s a simple, fail-safe way that the remote generator won’t send more power into a dangerous situation,” said Darcy Braun, president of DX3 Enterprises. “As soon as the device senses any issue, it will disconnect itself from the grid, but the generator can continue to power the home or the farm.”

Utility companies around the world are seeing the value of the DX3 technology. The DX3Pulsar Anti-Islanding Protection equipment has been sold in Australia and the state of New York, and major utilities in Canada (including TransAlta, Manitoba Hydro and Ontario Hydro One) are now testing the technology for use on their power grids.

In the United States, the Electrical Power Research Institute (pooling the research efforts of multiple American utility companies) has purchased a DX3 unit for full-scale field testing. The same level of testing is being done by Florida Power on behalf of the U.S. Department of Energy.

The regulatory and approval process is rigorous, but Braun is confident DX3’s technology will pass these tests. “Our goal is to sell 15 to 20 units in 2014 and be up to 50 to 80 units sold annually by 2018. Our ultimate goal is to sell 200 to 300 units a year once we are fully established.”

“Part of TEC Edmonton’s mandate is to encourage the commercialization of innovative technology here in the region, growing knowledge-based jobs and wealth creation in Greater Edmonton,” said TEC Edmonton’s Darrell Petras. “We’re very pleased to see Dr. Xu’s technology, developed locally at the University of Alberta, being licensed by a company in Greater Edmonton that is now selling that technology worldwide.”

“Ten years ago we saw that Alberta was facing this problem, and that it was a barrier for independent generators,” Xu said. He secured funding from the Alberta government and later worked with ATCO Electric and Manitoba Hydro to test and refine the technology.

Today, with an Alberta-based firm selling products based on university research to international markets, Xu says the technology is “a great example that shows it pays to support research.” He also acknowledges the critical, initial financial support of the Alberta government’s COURSE program to the research work.