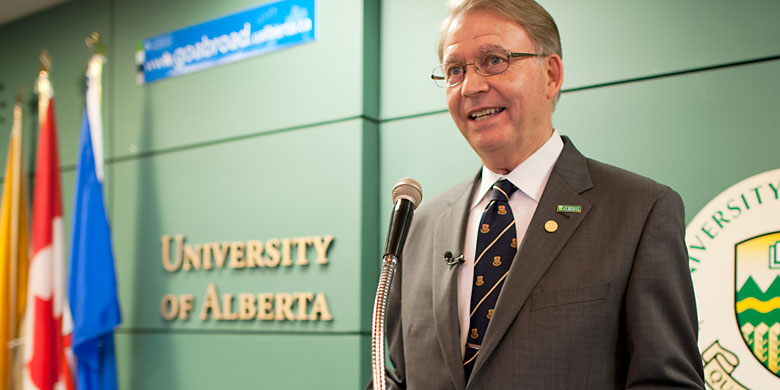 (Edmonton) As researchers and students continue working to address some of the world’s most pressing needs, it’s important, says Murray Gray, U of A vice-provost (academic), that viewpoints from around the world are part of that effort.

The sense that much of the world is now represented on campus resonated with Gray as he welcomed international undergraduate, sponsored and education abroad students Sept. 24 at the Chancellor’s Reception for International Scholarship Recipients. Looking at a group of students from just about every continent, he said he sees how the U of A has become significantly internationalized.

A community that enriches a university

“This year the U of A welcomed 1,100 new undergraduate students and about 650 new graduate students from 56 different countries. That brings the total number of international students on campus to approximately 5,800,” Gray said. “That’s a tremendous community that is enriching our university, as well as the city of Edmonton and the province of Alberta.”

Among them was Tinalin Yang, whose journey to the U of A took an unusual path that started when his mother was studying the qin zither, an ancient Chinese instrument.

“I was curious about it and she found out that I learned faster than she did, so she sent me to study with a master,” said Yang, who won eight scholarships. He excelled studying an instrument he says was once played only by Chinese emperors, scholars and generals. That success led to an invitation to play and talk at the U of A last year. The visit left a lasting impression when he was invited to visit some research labs.

“It was the first time that I saw research being done in such high-tech labs, and I made up my mind then to apply to come to this university,” he said. “The thing that impressed me most was professor’s Chen Jie’s work, because it’s interdisciplinary. That’s why I changed my faculty from engineering to science, and enrolled in the Science 100 program.”

U of A chancellor Ralph Young said the scholarships are an investment by the U of A in future leaders. Young noted contributions by former students, such as Krishan Joshee, Yasmin Jivraj and Lubomyr T. Romankiw, who were celebrated during Alumni Weekend and who have an international background.

“You too can have the kind of distinguished careers that these individuals have had,” Young told the scholarship recipients. “We hope you take your career to great heights in the future. We will be here to support you.”

Several of the students spoke about the support they’ve been receiving. Most said the U of A’s reputation and scholarships were foremost in their minds in deciding to come to the university. But since they’ve been here, they’ve also found reasons to stay.

“The people at the international office help you with every single process, and it really helps you fit in,” says Zartaj Habib, from Pakistan. “It really helps when you come to a new place and have no idea how it runs, especially if you have no relatives and have come alone.”

And it’s not just international student programs that help, but also other programs, said Saransh Saxena, from India, who won eight scholarships. “This is my second year in Lister and I’m absolutely in love with Lister. I’d like to stay there as long as possible. You feel like you’re just like any other student, not just an international student. I have a cousin in an Ivy League university; I feel like my university is my home but he feels like there’s a disjoint from his university.”

“Even though this university is so massive,” Zartaj notes, “you still feel connected. I feel a part of this university and it’s so soon; I’ve been here not even a month.”

“My study permit is actually expiring today,” says Nitun Kundu from India, who also won eight scholarships. “A month ago I was really worried and I went and talked to the people at the international centre and told them I don’t know what to do. They actually helped me out and I got my study permit on time—and I’m still studying here.”

Marion Wanganyi, a recipient of the Global Citizenship Scholarship, arrived late from Mombasa but she says support from staff at the centre got her started quickly. “I had a lot of challenge finding out where my classes are, but they gave me an orientation, told me the things I need to do and places I could go for help,” she said.

Most of these experiences are the result of the array of services University of Alberta International provides for international students, from a welcome at the airport to support workshops throughout the year.

Young said such support is important because the achievements of the university are closely linked with those of students. “Our success as a university will depend very much on your success,” he told the recipients. “Please continue to do what you can to make this university one of the world’s great universities.”