Investment in post-secondary infrastructure pays off 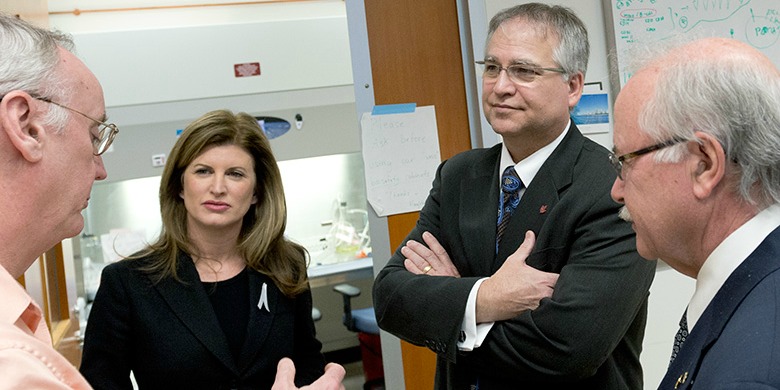 (Edmonton) The national success of Canada’s Knowledge Infrastructure Program was celebrated Nov. 30 on the University of Alberta campus.

Gary Goodyear, minister of state for science and technology, and Rona Ambrose, minister of public works and government services and member of Parliament for Edmonton-Spruce Grove, were on hand to officially close the Knowledge Infrastructure Program (KIP) in a ceremony held in the Katz Group Centre for Pharmacy and Health Research.

KIP, a key part of Canada’s Economic Action Plan, invested $2 billion in more than 500 infrastructure improvement projects at post-secondary research and training facilities across the country, including the U of A. The program provided vital economic stimulus, created jobs and helped generate the advanced technological infrastructure needed to keep Canadian institutions at the forefront of scientific advancement, said a news release from Industry Canada.

“Today, as we celebrate the completion of this successful program, we see the results of our government’s investments in facilities being used every day, at campuses like this one, in every province across this country,” Goodyear said in the release. “The Knowledge Infrastructure Program achieved its goal of delivering economic stimulus when it was needed most. It also fulfilled this mandate in a tight time frame, while leaving a lasting legacy of modernized infrastructure at colleges and universities.”

As one of the institutions that received KIP support, the U of A has benefited greatly, said President Indira Samarasekera.

"The Knowledge Infrastructure Program has been vital in helping the University of Alberta address our pressing infrastructure needs," Samarasekera noted. "We appreciate this funding support from Industry Canada, which has been directed at projects such as the completion of laboratory spaces within the Katz Group Centre for Pharmacy and Health Research and deferred maintenance in our Chemistry and Biological Sciences buildings."

During their visit to the U of A, the ministers toured some of the renovated campus facilities that were supported with $62.1 million accessed through the program.

“In Canada, and certainly here in Alberta, the knowledge economy is growing,” Ambrose said in the release. “It complements our traditional industries like energy, manufacturing, agriculture, mining and forestry—in fact, it enhances them. Through the Knowledge Infrastructure Program, we helped give our scientists and researchers the support they needed to get their ideas off the drawing board and into the market.”