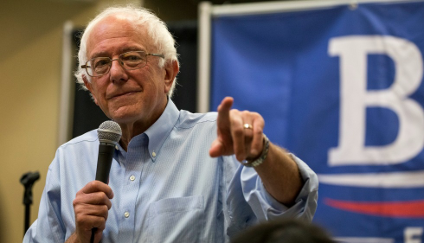 Bernie Sanders' narrow loss to Hillary Clinton in Iowa was seen by many as a victory. (Photo: Phil Roeder, shared under Creative Commons licence)

The results from the Iowa caucuses on Feb. 1, the first official event on the 2016 U.S. presidential election calendar, seem to act as an inkblot for political observers—what you see depends on who you are.

On the Republican side, Donald Trump, the frontrunner according to pre-caucus polls, was seen by pundits as a double loser, whereas Texas senator Ted Cruz was a double winner. Why double? First, Cruz won the most votes, four per cent more than Trump. Second—and more importantly because expectations rule elections, the polls predicted the opposite result—Cruz beat expectations and Trump failed to meet them.

But many declared the Iowa winner to be Florida senator Marco Rubio for his third-place finish. Rubio met and exceeded expectations, which affirmed his viability and newsworthiness.

For the Democrats, former secretary of state Hillary Clinton’s razor-thin margin over Vermont senator Bernie Sanders was his actually his victory. Despite 25 years in Congress, Sanders, a self-described democratic socialist, lacks Clinton’s establishment credibility and financial backing. This has helped him become his own grassroots movement, attracting young people, left-leaners and others who feel left out of politics.

Though the 24-hour news cycle tends to amplify every shift at the earliest stages of the process, University of Alberta political scientist Judith Garber suggests keeping a bit of perspective.

“Don’t get mired in the gory details,” Garber says. “Focus on the big picture, because there are a hundred different presidential nomination processes going on, if you take the Democrats and Republicans in all 50 states.”

“Does it really matter if you know exactly how ​Party A collects votes via nomination system B in state C, and that they use process D to turn votes into convention delegates for candidate E? No, that is probably not important for you to know unless you’re a candidate or a voter there,” she says.

By mid-June, Democrats and Republicans will have held caucuses, primary elections or conventions in all states and the District of Columbia (plus American territories like Puerto Rico and Guam). The Green Party, the Libertarian Party and others will nominate their candidates in any state where they have qualified to be on the ballot.

Each step in the long nomination process, Garber says, helps build or break candidates’ popularity, funding and media image. Technically, the process is allocating delegates who will vote for their candidates at Democratic and Republican national party conventions in July, with the winner choosing a vice-presidential running mate and contesting the Nov. 8 presidential election.

For Garber, the big picture is that, despite the heavy media attention, the Iowa caucuses and the New Hampshire primaries are not crucial contests in and of themselves, since these states send so few delegates to the national conventions and aren’t demographically representative of the country.

“They’re important because they give the public a first crack at the candidates, or they give the candidates a first crack at the voters,” Garber says. “And frequently in Iowa and New Hampshire, there will be somebody on a trajectory that doesn’t get caught by the polls—that would be Marco Rubio—and that result may be meaningful in the whole context of the nomination process.”

In terms of what lies ahead, Garber notes that Rubio’s success immediately prompted other candidates to start campaigning against him in New Hampshire, whose primaries are Feb. 9. Clinton will likely lose New Hampshire—Vermont’s neighbour and the home of free-thinking Democrats—with two wake-up calls and a need to mobilize her resources.​

For the ostensible frontrunners, Garber says Iowa can be a reminder to “step up their game” and work harder to connect with voters. She says Trump’s decision to skip the last debate and his lack of effort in mobilizing support on the ground—something Cruz did brilliantly—cost him votes and improved Rubio’s chances.

Likewise, Hillary Clinton should consider why she’s not doing better. “She needs to start campaigning like she’s already president. She’s even turning off white baby-boomer women, who are a huge swing vote in U.S. elections,” Garber says. “There’s got to be a little bit of life in her, some genuine warmth—she got elected to the Senate by doing well even in Republican areas of New York, so she is capable of being persuasive.”

Garber echoes the suspicions of some political observers that, whatever his reasons for running and his encouraging poll numbers, Donald Trump does not want to be the president of the United States.

“If he’s president he cannot hire and fire people. And is he willing to let someone else control his money if he were elected? Something says to me this is a lark for him.”

For Garber, Clinton still looks like the inevitable Democratic nominee, which may be plain by March 1, “Super Tuesday,”when a dozen states hold electoral nominations, including several southern states she believes won’t support Sanders.

“But unless the Republicans remain in disarray in April, if she goes into Super Tuesday needing to come from behind, I think that will make a big difference in terms of her electability overall,” Garber says.