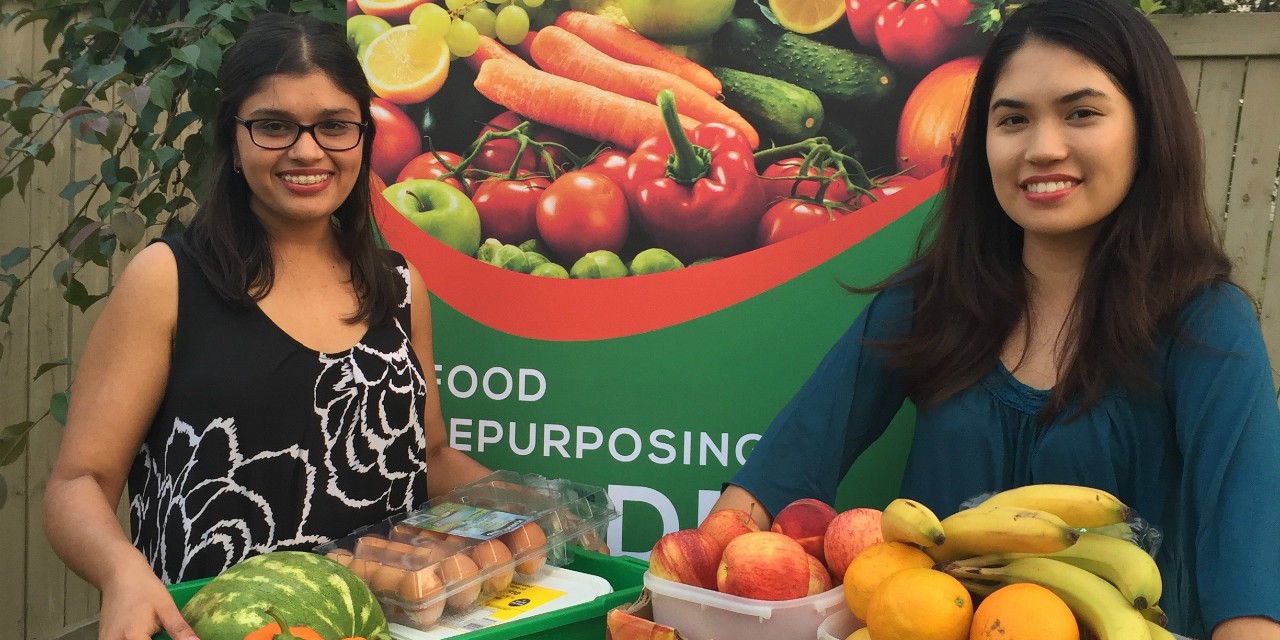 Ria Rana and Mursal Khedri are creating a free app to bring surplus produce to people who want to buy it at bargain prices.

The racks of cut-rate, bruised fruit and vegetables in the discount aisle were always the first stop for Ria Rana’s mother while grocery shopping. As a teen, Rana wondered why they couldn’t instead choose from the store’s displays of perfect, colourful produce.

“She would say that there was nothing wrong with that food,” said Rana, who still checks those discount racks today. It was a lesson that stayed with the young woman, eventually nourished a class assignment at the University of Alberta’s Peter Lougheed Leadership College—and then turned into a community project.

Rana and Mursal Khedri, one of her classmates at the college, are now raising $10,000 through a GoFundMe campaign to launch Our Servings, a free app to connect food suppliers like farms, grocers and restaurants with local charities, hot lunch programs and community kitchens. The idea is to get surplus fruit and vegetables to people who can use them, cutting what goes into the landfill.

They hope to launch a desktop version of the app by mid-December. Meanwhile, they need to raise enough money to create a fully functioning version available for download on iOS and Android devices.

“It’s like Kijiji for surplus food. Our goal is to tackle the issue of food waste in Edmonton,” said Rana, who graduated from the U of A in 2016. “Thousands of dollars of perfectly edible food is thrown out, either because it doesn’t meet aesthetic standards or simply because it’s surplus.”

The cost of Canada’s food waste is almost $31 billion a year, according to Value Chain Management International.

Rana and Khedri, who graduated in 2017, both immigrated to Canada as children—Rana from India and Khedri from Pakistan—and occasionally their families relied on food programs to stretch the budget.

There was usually lots of bread and pastries to help fill the pantry, Khedri remembers. And though she loved the taste of sweet buns and powdered doughnuts, fruit and vegetables weren’t available.

“We had to find other cost-cutting measures to get that kind of food.”

Years later, as students at the Lougheed College, Rana, Khedri and their classmates were assigned to do a video on a community issue. Food waste seemed a natural topic.

“I did some research online and realized it was a big issue,” Khedri said.

For five months, the group conducted market research, talked to various Edmonton food-related groups, produced their video and completed the assignment. Along the way, they realized that good food was being wasted for a simple lack of networking.

“There are a lot of local farms on the outskirts of Edmonton. If their produce doesn’t meet specific standards of how it looks, grocery stores won’t buy it. So farmers are left with a surplus they either dump or don’t pick at all. We were told that they didn’t know who to give it to,” Khedri said.

The idea of an easy way to fill the gap between producers and consumers—an app—stayed with Khedri after the school year ended.

“I kept thinking about it. There was nothing like it available in the city, and we saw through our class project that it was needed.”

She sent an email over the summer to her classmates, and Rana responded. “It’s a personal habit of mine to minimize waste—the whole topic was close to home.”

The pair got to work, talking with growers, grocers, restaurant owners, food banks and farmers’ markets, testing buy-in for the idea.

“Our goal was to develop something they would use, that would be taken over by the community,” Rana said.

Our Servings, in early development now, will be an online marketplace that updates in real time for people who have surplus produce and for those who want to buy it at a discount.

The plan is to open it to as many people as possible, from growers with big and small gardens, to food programs, to individual families looking to buy—not take—food.

“Many families don’t want to go to a food bank; there’s a stigma that goes with that,” Khedri said. “They can say they bought it; it wasn’t given to them.”

The pair are working on terms and conditions with Alberta Health Services to ensure the food being traded, bought or sold is safe and edible. They hope that once Our Servings is live, it will have 200 to 300 vendors and 3,000 to 4,000 consumers.

As the app gathers steam, they’ll also keep statistics to analyze just how much food is being saved yearly.

“We will use this as a parameter to measure success, and also increase public knowledge about food waste,” Rana said. “We think it is easier to grasp the extent of an issue when it can be quantified in numbers. Every transaction on the web app will be tracked to keep an account of how much food was redirected and repurposed. I think when people see the impact they can make in mitigating food waste, they will be more encouraged to use our marketplace to buy food.”

Taking the project beyond the classroom and into the community has been an exciting—if exhausting—journey for the pair. They put in 10 to 15 hours a week on top of full-time schedules already. But they want to make a difference, based on what they learned at the U of A.

“Our passion for this comes from the idea of social innovation and entrepreneurship based in community engagement and empowerment,” Rana said. “Our overarching goal is to work with the Edmonton community, rather than ‘on’ it. And that's really our motivation to keep working harder for a better solution."