Alberta’s big-city mayors talk about how cities hold solutions to some of the world’s greatest challenges. 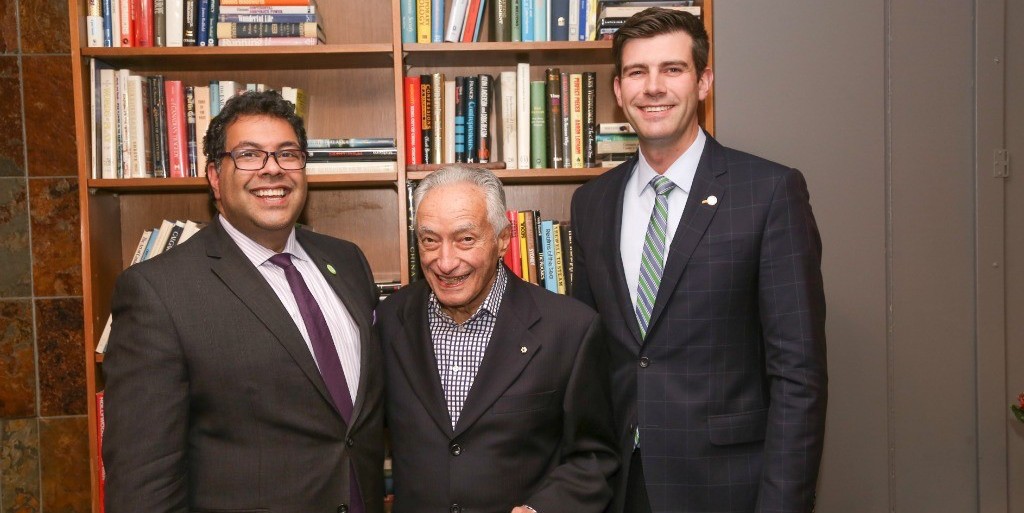 You know it’s not going to be a typical lecture when one of the distinguished speakers begins the event by dancing an impromptu jig.

The mayors of Alberta’s two largest cities, Don Iveson of Edmonton and Naheed Nenshi of Calgary, came together with insight—and more than a little humour—to talk about cities as part of the 10th annual Hurtig Lecture on the Future of Canada. The annual lecture celebrates engaged citizenship, and as Lise Gotell, acting dean of the Faculty of Arts, noted, this year’s lecture focused on cities to “recognize how a nationally engaged citizenry begins at the local level.”

As Iveson noted, the event was timely, coming just two days after the federal election: “Canada's mayors have worked hard over the past several years, and through this federal election, to ensure cities are recognized for the important role they play in nation building—and that they're worth investing in.”

The voices of Alberta’s mayors were prominent during the election campaign, with the hashtag #peoplelikeNenshi trending across Canada after Jason Kenney accused the Calgary mayor of politicizing the niqab after Nenshi said the Conservatives’ stance was a “dangerous game,” and Edmonton’s Iveson taking strong positions on funding for transit and affordable housing.

At the tipping point of an urban shift

The mayors noted that the prominence of municipal voices on the national stage reflects Canada’s continued urban shift.

“Today, four out of five Canadians live in an urban centre, which has changed the dynamic and the character of our country. We're at a tipping point of sorts,” said Iveson. “Cities are the economic engines of Canada—Edmonton and Calgary alone generate 67 per cent of Alberta's economic activity—and they have become the places where some of our most complicated problems like climate change, poverty and our nation's productivity are going to be addressed.”

With our population concentrated in urban areas, municipal leadership is essential, Nenshi said, because cities are the closest order of government to the people. The Calgary mayor added that this puts Canada in a unique position to show how cities can be at the forefront of change on important global challenges such as climate change, poverty, and economic development.

“When we get it right, when it works, it works better than anywhere in the world,” he explained. “We need to export the best of Canada to the rest of the world.”

Iveson agreed, noting the importance of local leaders coming together through events such as the Climate Summit of the Americas, where mayors such as Vancouver’s Gregor Robertson have been at the forefront of the environmental conversation alongside people such as former New York mayor Michael Bloomberg.

Iveson emphasized the importance of “not waiting for action, not waiting for the polls, but rolling up your sleeves and taking leadership on the tough issues that matter to people in the communities they live in,” reflecting what Nenshi described as the unique ability of local governments to make fast, tangible change.

One of Nenshi’s most loved phrases, echoed again at the lecture, celebrated this “power of everyday people with everyday hands and everyday voices to make change in the world.”

Tapping into the potential of local thought leaders is a key area where universities and cities can become partners, said Iveson. “I often use the U of A as an example of the role cities like Edmonton can play in tackling some of the big challenges. In cities, there is this tremendous convergence of people, capital and creativity that transforms urban centres into living labs, where game-changing ideas quickly connect with the fuel to make them possible.

“The work that we're doing to diversify Edmonton's economy through incubation and technology transfer via TEC Edmonton is the kind of work that makes our country more resilient and competitive. And that kind of work only happens in cities.”

Cities also have to focus on partnerships at the intersection between Indigenous and urban issues, Iveson said. In the wake of the Truth and Reconciliation Commission hearings and with a growing population of Indigenous people living in Canada’s cities, Iveson sees this as an important opportunity to reconceive our country.

“We want to co-create cities together; that can be one of the supreme acts of reconciliation,” he said, noting that cities’ role in reconciliation is part of a new idea of working together across Canada, one that includes respectful nation-to-nation relationships with First Nations groups and collaboration across orders of government to work on questions of health, inclusion, justice, economic development and the environment.

The mayors agreed that municipalities need enough funding to be able to address these big concerns on the local level through affordable housing, transit and other important public services, with Nenshi pointing out that “public investments create opportunity to create that uniquely Canadian life.” Iveson underscored this need, pointing out that Canadians believe cities are the best at using tax dollars effectively, despite municipalities receiving between six and 15 per cent of every tax dollar collected in Canada while the public thinks they get about 25 per cent. “Give us the other 20 cents and see what we can do.”

The mayors believe that local politics have the most potential to make evidence-based decisions, rather than partisan ones, because of the inherently collaborative nature of how Alberta’s municipal governments are structured. Iveson sees this reflected even in the shape of the council chamber, which creates a circle of the mayor, councillors, staff and the public.

Mayors have to listen to and work with the public—something Nenshi said reflects his core political philosophy: “People aren’t stupid.”

Iveson chimed in with his best Batman impression: “People are good.” Nenshi added, “It’s very easy for people who have the microphone to inflame hatred, to fight against that inner good. It is so easy for those who have the microphone to be able to inflame those fears instead of reminding them that what is inherently good overcomes those fears.” Municipal leaders have a responsibility to overcome cynicism and fear through honesty and a focus on making positive change.