For Cathy Wang, UAlberta’s job-shadowing program opened a window of opportunity to see her own potential. 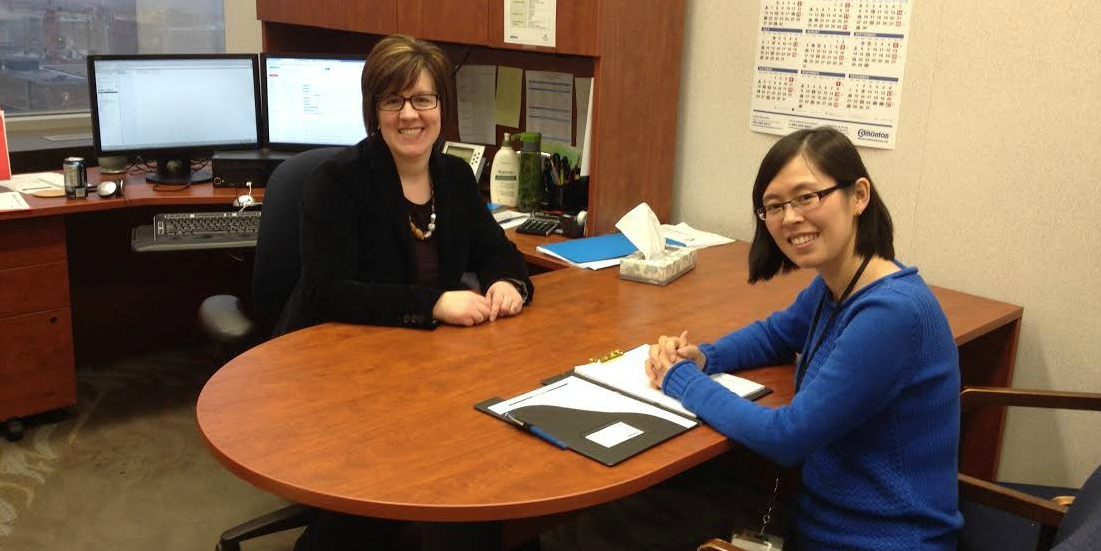 Cathy Wang (right) found a job with the City of Edmonton thanks to a job-shadow opportunity last year with Kirsten Anderson.

(Edmonton) I remember Cathy Wang distinctly. She always walked into my office with a smile. She always had a question to ask. She was eagerly seeking ways to reinvent herself, her education and her career.

When I met Cathy she was a master’s student in statistics—and like many students, she had been in school for what felt like years and years. Cathy’s career goal was to make the transition from academia to industry, but that transition seemed overwhelming and scary. She felt uncertain of her future.

When Cathy applied to the U of A’s Job Shadow Week, she did what most students do—she stuck to what she knew, hoping to find something she felt comfortable doing. Instead, she was surprised to find a job-shadowing opportunity she had never considered: Human Resources Research, Statistics and Reporting with the City of Edmonton.

Kirsten Anderson, the job-shadow host, works for the City of Edmonton in Human Resources, where she analyzes data to create usable information for managing the city’s workforce. Kirsten described a job-shadow experience that would explore how she uses numbers to help City of Edmonton leaders make good workforce decisions based on sound quantitative information.

The unconventional match of people and numbers turned out to be the perfect fit for both Cathy and Kirsten.

Cathy was matched to Kirsten to help Cathy build confidence in her abilities and learn to communicate her skills outside of academia. Kirsten was able to share her knowledge and serve as a mentor to a new professional—and was pleased to do so, having benefited from mentoring herself.

The match proved successful for both women—Kirsten helped fill a position at the City of Edmonton, and Cathy ending up filling the role.

“From a human resources perspective, helping source such a skilled candidate was really fulfilling,” says Kirsten. “Even more so, connecting a highly talented, charming and amazing person like Cathy to hiring managers was one of the most rewarding things I have done this year.”

Since April 2014, Cathy has been working as a business analyst at the City of Edmonton in the Sustainable Development Department, forecasting revenue and expenses that determine the budget for the Current Planning Branch, which will help the City of Edmonton grow sustainably.

“Kirsten has become not only a valued mentor, but a really great friend,” says Cathy. “She guided me and helped me understand my skills. I honestly didn’t feel smart enough, and she helped me see my potential.”