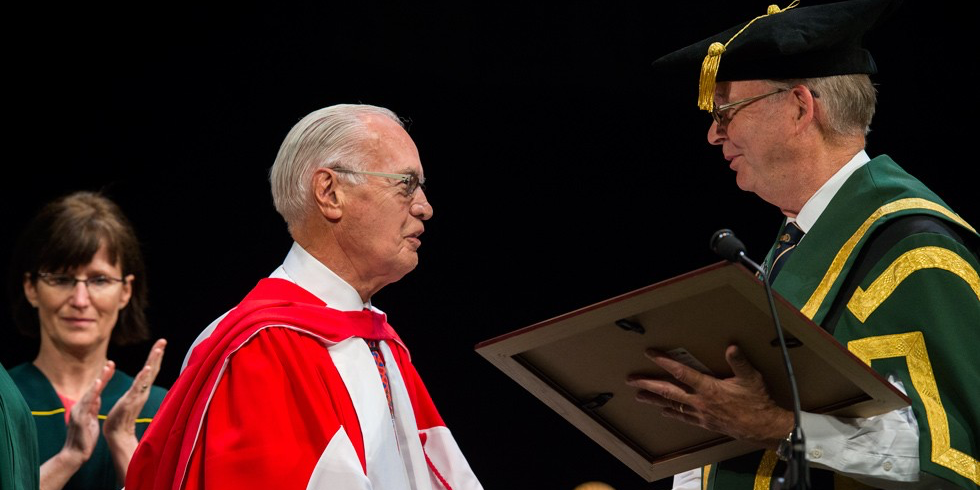 While receiving an honorary doctor of laws degree June 4, Bruce Hogle encouraged his audience of 420 graduates in the U of A faculties of law, arts and extension to heed the words of Vincent Massey, former governor general of Canada.

Quoting Massey, Hogle pointed to the idea of “an altar kept alight” as one of the ways to build a successful and prosperous community, aside from relying on Alberta’s natural wealth.

“These are the same lights on the altars that our leaders of yesteryear used to build this magnificent University of Alberta, this outstanding province of Alberta and this phenomenal dominion of Canada.”

A fixture on Edmonton’s television scene for 30 years beginning in 1965, Hogle not only used the powerful medium of TV to carve out a dynamic career as a broadcast journalist, but also leveraged its wide reach to galvanize change for community improvement.

Throughout the years, Hogle’s efforts helped build several community groups such as the Alberta Crimes Compensation Board, the Block Parent Program that provided safe neighbourhood spaces for children, changes to adoption laws and improvements for people with learning disabilities. He received the Order of Canada in 1998 for his community service.

Their U of A educations have prepared the new graduates to take on the challenge of leadership and community stewardship for themselves, Hogle noted.

“I would compare these lights on your altar to the lights of knowledge which you have acquired over the last number of years from superb dedicated University of Alberta professors, thus enabling you to be well prepared as our leaders of tomorrow.”

Prospective leaders also “make a firm commitment to those communities in which they live and work, be it any province within this glorious country, or any other nation which attracts you and what you have to offer.”

In accepting his honorary degree, Hogle acknowledged the support of family and the efforts of colleagues and friends in helping achieve the goals important to him.

“Any success I may have had as a journalist and community activist can be attributable to the incredible people I’ve worked with over the years.”

Among those who inspired him most are his own sons, two of whom studied law at the U of A. One of them, Randy, was legally blind, but succeeded with the assistance of his brothers and university volunteers—17 readers who taped all his books—and faculty who taped exams and provided space for the young man and his equipment.

“Others in your lives have truly provided similar inspiration,” Hogle told his audience. “They’ve assisted you in determining what works for you and what doesn’t. Where do your passions lie and what leaves you cold? Only you can provide those answers, which is also true of the major issues you’ll face.”

He advised the graduates to surround themselves “with people who see no obstacle or challenge that can’t be met. Involve yourselves with those who have positive outlooks on life.”

Hogle also asked them, as they “depart the University of Alberta distinguished halls of learning with your respective degrees, please remember these 10 simple words from Gandhi: ‘Be the change you wish to see in the world.’”