Jeff Bone traded in a successful career to go after his dream of teaching. Now he’s passing along his skills to a new generation. 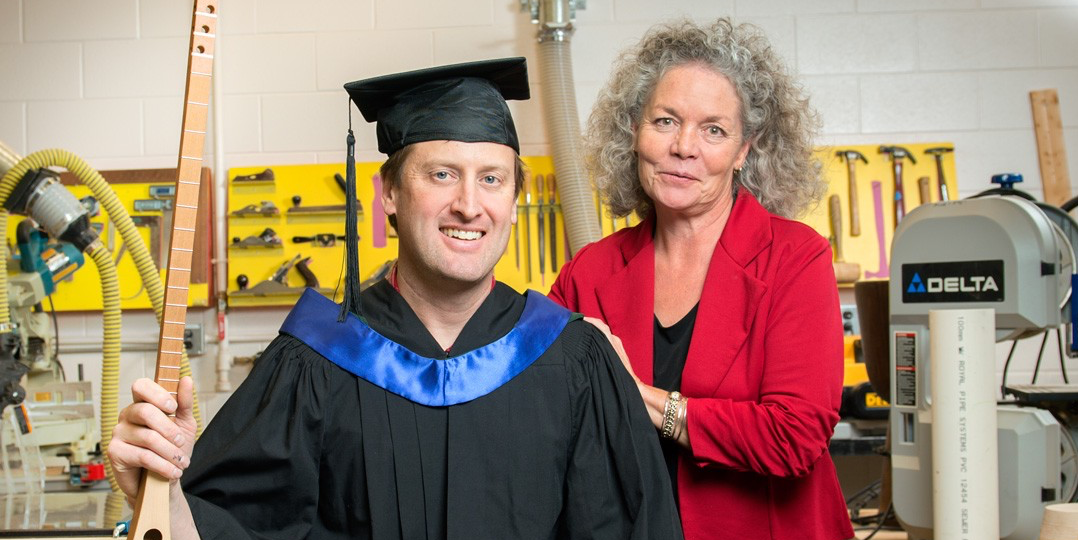 Jeff Bone earned his education degree in just over two years. He credits professor Bonnie Watt-Malcolm for easing his anxieties about going back to school after more than 20 years, and for supporting him through the transition from journeyman carpenter to his dream job as a teacher. (Photo: Richard Siemens)

(Edmonton) Jeff Bone was terrified when he arrived at the University of Alberta two years ago to start his education degree. He was 39, and it had been more than 20 years since he last opened a textbook. His mother had also recently sent him his high-school report cards—which, he admits, were “really, really bad.”

Bone had spent the years since high school earning his ticket in carpentry and establishing a successful career building houses, roads and bridges in B.C. He has Red Seal certification in his trade and made a good living, but he wanted more out of life and thought teaching might just give him the satisfaction he was looking for.

"We were set up good, and I took my family away from everything they knew,” he says of the sacrifice he made for a career change. “But there's more to life than money, and for me it was pushing myself to do something that I never thought I'd have the opportunity to do. I was getting older and felt time was slipping away, so if I was going to change careers, I thought it should be my dream job."

His online search eventually led him to Bonnie Watt-Malcolm, a professor in the U of A’s Department of Secondary Education and former journeyman insulator who is one of the architects of Alberta Education’s Career and Technology Studies Bridge to Teacher Certification program. The four-year-old program is designed to help skilled tradespeople become teachers.

Watt-Malcolm remembers talking to Bone when he first called, doing her best to allay his fears about adjusting to university as an older student. Behind the anxiety, however, there was something in him, as there is with so many tradespeople who decide to choose this path, that spoke volumes—hard-earned confidence, self-knowledge and determination.

“You know they have the resilience to work through it, and the talent,” she says. “It’s just that the language is so different—all those education acronyms. Just walking onto this campus is terrifying for them. You want to give them a hug.”

Bone credits Watt-Malcolm for making the transition possible: “She has played a huge role in my life. Bonnie is the reason I'm here. She’s always been so positive and supportive. You just don't know what you're getting into, but she definitely talked me off the roof a few times.

“On the other hand, the program sounded too good to be true. I remember asking a friend, ‘Is this for real? Can we really do this? But Bonnie understood that people in my position will likely do well because we're successful in industry.”

Once Bone found a school in High Prairie to sponsor him, it didn’t take him long to get up to speed. The bridging program cut a year of coursework from the normal four-year degree to compensate for his ticket and also provided funding in the first year.

It also allowed Bone to earn money teaching before graduating, according to the terms of a letter of authority issued by Alberta Education. After a year of coursework, he was placed last year in Ponoka and this year is teaching career and technology studies, math, science, art and physical education at Edmonton’s Michael Strembitsky Junior High School.

By completing degree requirements during summers, evenings and weekends, he managed to finish in a little more than two years. As it turns out, his work experience and tenacity helped him perform exceptionally well, he says, resulting in a GPA that was “really high—shockingly so,” putting the lie to those old high-school report cards.

At the same time, he found out just how demanding teaching can be when your heart is in it: “I'll be very honest: I bad-mouthed teachers my entire career because I thought it was an easy job. Being blue-collar, a lot of people don't understand that, but it's a tough job. It takes a very dedicated person to do it."

But the rewards are beyond measure, he says. "I know I made the right choice and haven't regretted it ever. You pay the price when you genuinely care. I think about school 24 hours a day, and there’s a lot of emotional and mental fatigue, but it's so rewarding and worthwhile—very fulfilling.”

Bone is keenly aware that he teaches more than just shop skills, and it’s what makes someone with his industry experience so valuable. Beyond introducing students to power tools and design concepts, he’s preparing them for the expectations of a professional work environment.

"It's great to build a breadboard or a guitar—whatever the project is. But there's timelines, responsibilities, how students organize themselves. Those are the skills employers look for. Are you on time, are you organized, do you have a good attitude and are you working safely?”

Most rewarding of all, says Bone, is when he recognizes that same anxiety he felt two years ago in the eyes of his students, the self-doubt and apprehension that, with his guidance, soon transform into confidence and the power to succeed.

"There were a few girls in my class who were terrified, but they also ended up being the best in the class, because they are careful and dedicated. You kind of get wrapped up in the teaching and organizing, but when you finally step back and let them get to work, they're so intent on what they're doing. They're proud and they and bring their work up to show you.