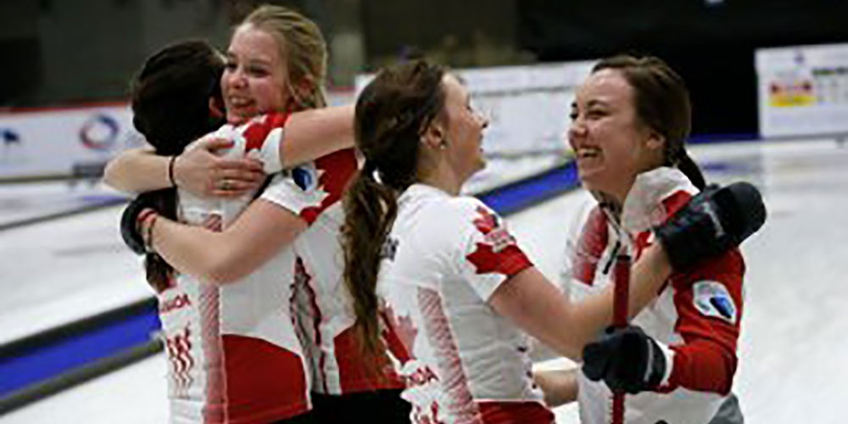 For the second year in a row, the World Junior women's curling champion is a rink from the University of Alberta, as the Pandas junior team, representing Team Canada, beat Scotland by 8-2 in their gold medal final in Tallinn, Estonia. This victory also completed a remarkable personal double for their skip Kelsey Rocque, who retained the world title with a completely different team from last year's winners.

Canada held last stone at the start of the game and blanked the first end. In the second end, Canada's skip Rocque was heavy with her attempt to draw for two points and had to settle for opening the scoring with just one point.

Scotland got on the board in the third end, but by accident. Their skip Gina Aitken wanted to blank the end, but her final effort was tight and she hit and stayed for an unwanted single point.

The Canadian breakthrough came in the fourth end when Rocque pounced on her chance to hit out a Scottish stone and score three points for a clear 4-1 lead. The Scots then succeeded in blanking the fifth end and Canada took a 4-1 lead into the break.

Looking for a bigger score that would bring her team back into the game, Scotland's Aitken was instead forced to draw for just one point in the sixth end to reduce Canada's lead to 4-2.

Canada had another breakthrough in the seventh end, when Rocque had a nose-hit for another score of three, increasing her lead to 7-2.

In the eighth end, Aitken's final draw came up short to gift Canada a steal of one point and, with the score now at 8-2 to Canada and only two ends left, the Scots conceded.

After her win, Rocque said, "It’s pretty awesome. It’s such a cool feeling and for four of those girls it’s the first time the gold will be around their necks—and hopefully not the last."

Speaking about her team, she added, "We’re best friends on and off the ice. What we really do is we handle our emotions well on the ice and we don’t get too worked up over things.”

Meanwhile, Scottish skip Aitken said, “It was a really good game. I think both teams actually played really well and in the end it just came down to a few shots that didn’t come off for us and then Kelsey and her team played well and took advantage of it. I think just now we are a little disappointed but in a couple of hours or a couple of days we’ll be delighted with what we’ve done."

In winning the gold medal final, the Canadians completed the whole week's competition without a single loss. They won all nine of their round-robin games, beat Scotland in their Page Play-Off game then repeated that win in the final. They are only the second team to complete that feat, after Canada's Marliese Miller at the 2003 Championships in Flims, Switzerland.

Speaking about her undefeated performance, Rocque said, “We were talking about going undefeated a little bit at supper last night, but yeah, it’s pretty awesome."

With the conclusion of these championships, the final lineup of nations qualified for the 2016 Olympic Youth Winter Games in Lillehammer, Norway, is now determined.