Judging the role of religion in law 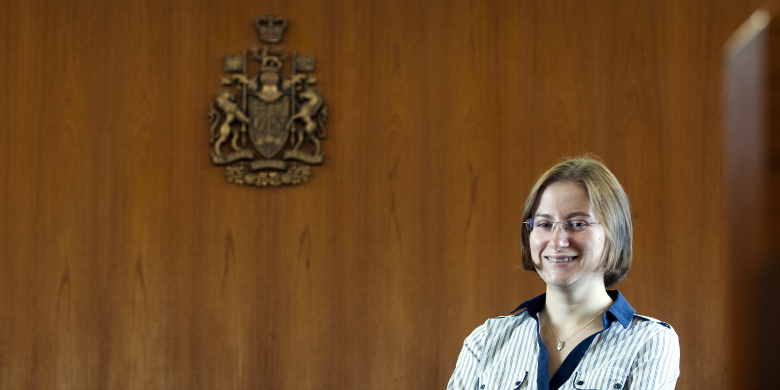 120803-sarahhamill-banner
Sarah Hamill is a doctoral student in the Faculty of Law at the U of A. (Photo: John Ulan)

(Edmonton) According to our constitution, Canada is founded on principles that recognize the supremacy of God and the rule of law. In our court system, witnesses and parties testifying swear an oath to God to tell the truth. So what would be wrong with judges using a little religious reasoning in their decisions?

One University of Alberta researcher says that may be taking religious freedom a step too far.

Sarah Hamill, a doctoral student in the Faculty of Law, recently published an article in response to a premise that said judges who lack direction-setting precedence in cases should use religious-based reasoning. Hamill contends that—aside from being a serious breach of the separation of church and state—such decisions would be constitutionally dangerous. She says that when it comes to deciding on issues from human rights to balancing conflicting rights, cooler, secular heads should prevail.

“In order for everybody to be able to agree with a judicial decision, they have to start from a position of neutrality, which is the state,” said Hamill.

In praise of a secular state

Hamill notes that the emergence of Western democratic states gave rise to a separation of church and state, one that saw religions lose their place in national identity and their influence on political power. In Canada, immigration and the adoption of a multicultural society has led to what she calls a new understanding of a secular society. She says the Canadian Charter of Rights and Freedoms guarantees freedom of religion and conscience for all, and aims to promote tolerance and accommodation of Canadians’ wide variety of religious beliefs. But she says that when it comes to equality and fairness in law, religious considerations have no place in the judicial decision-making process.

When church and state collide

Even within a secular society, there will be clashes. Hamill cites examples of legal challenges in which religious beliefs and personal freedoms collided, such as the case of a drugstore chain that questioned the legality of a law that forbade Sunday shopping, or a printer who refused to accept a print job for a gay and lesbian organization because of his religious beliefs. For cases in which there is potential for conflict, Hamill says there is usually sufficient Supreme Court jurisprudence and case law that clearly identify where the interests of the law rest.

“Freedom of religion means accommodation but not support. The Canadian state is not trying to impose any one set of particular religious views on anybody,” said Hamill. “These are democratically agreed-upon views, a commitment to live together peacefully. People don’t have to agree with it, but they have to comply with it.”

Judges as Solomon lite: All the wisdom, without the faith

Hamill says judges need to remain unbiased and impartial in any case they preside over, and should recuse themselves from a case when they believe themselves incapable of remaining neutral, to remove any chance of impartiality or bias. Impartial legal decision-making actually favours all parties; otherwise legal findings could alter significantly depending on the religious bent of the judge. Whichever side of the court Canadians find themselves on, she says, the absence of religious-based reasoning ensures fairness and equality.

“An impartial judiciary is crucial for ensuring fairness and justice in the application of the law,” said Hamill. “Judicial decisions free of religious-based reasoning ensure that the state does not support one religion over another, or impose religious beliefs on those who may not share them. Thus it actually upholds, rather than infringes, freedom of religion.”

Judging the role of religion in law
Newsroom