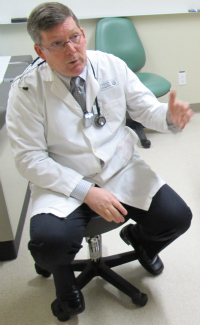 (Edmonton) Seven per cent of adults and 14 per cent of Canadian children have a hard time breathing because of asthma. Brian Rowe, in the Faculty of Medicine & Dentistry at the University of Alberta, is working towards making life easier for both asthma patients and emergency physicians who treat them.

In a recent study, Rowe came up with a scoring system to help emergency doctors decide whether to keep a patient at the hospital or send them home.
“When they’re admitted they take a bed, so if there’s a way we can safely avoid them being admitted we’d like to try to do that,” said Rowe.

Appropriate treatment is a major part of the work being done by Rowe, who is associate dean clinical research. Rowe is funded by the Canadian Institutes of Health Research and is a Canada Research Chair in Emergency Airway Diseases.

In his most recent work, Rowe looked at presentations of asthma in the emergency department at 10 different sites across the country. His research group asked three important questions about patients who came in to the ER with asthma: age, the severity of the asthma attack and the medications they are on. From there they looked at the patients who were admitted and what factors caused them to have to stay in the hospital.

The group used that data to develop a scoring system for emergency physicians to help them decide if the patient stays or goes home.
Rowe found that the most relevant factor is the type of treatment the patient is on.

Two-year-old Matthew Doyle is one of the patients Rowe is trying to help keep out of hospital. He and his mother Sarah have spent their fair share of time at the hospital because of his asthma. Until they got him on the right treatment plan, they were visiting a health-care provider every six to eight weeks.

“It was as simple as walking outside and being in the pollen in the springtime or being exposed to snow mould in the air,” said Doyle. “Within an hour we were seeing asthma wheezing.”

Since then, doctors have changed his treatment and Matthew and mom haven’t been back to the emergency room.

But with changing seasons, Doyle and Matthew could always end up back at the hospital and that is why she is thankful for the type of work Rowe and his group are doing, because anything that can speed up the process of treatment in the emergency room the better, not to mention improve the care given by emergency physicians.

The editorial board of the Canadian Respiratory Journal, which is where this work was published, was impressed by this work too; it named this study the most influential paper of the year.

“It’s nice for the team to win that award because it validates the work that we’re doing,” said Rowe. “Sometimes as a researcher you just work and you don’t know what impact things are having; it’s never easy, so my team was very pleased and I like to see them excited about the work.”

The next step is to do a validation study, which means they’ll have emergency physicians across the country try out the scoring system and let Rowe and the research team know if it is effective. If it’s deemed a good system it could be implemented in emergency rooms across Canada.