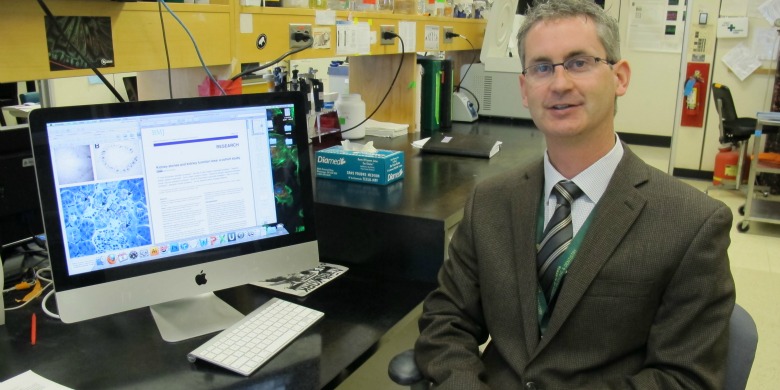 120906-toddalexander-banner
UAlberta researchers Todd Alexander (pictured) and Marcello Tonelli discovered that people with a history of kidney stones were twice as likely to develop serious problems such as kidney failure.

(Edmonton) People who have had kidney stones are twice as likely to need dialysis or a kidney transplant later in life, according to recently published findings by medical researchers at the University of Alberta. Their article was printed in the British Medical Journal.

Faculty of Medicine & Dentistry researchers Todd Alexander and Marcello Tonelli tracked data from more than three million Albertans over an 11-year period from 1997 to 2009. They discovered that people with a history of kidney stones were twice as likely to have serious kidney problems later in life as were people who had never suffered from kidney stones. And women under the age of 50 who had a history of kidney stones were four times as likely to develop kidney failure later.

Although the actual number of those who developed kidney failure was small, the link with a history of kidney stones was noteworthy.

“I think what these results tell me is that we should be screening those with a history of kidney stones for risk factors for the development of kidney disease,” says Alexander, the study’s first author and a practising pediatric nephrologist.

“I am not surprised by these findings, because when you are passing a stone through a kidney, there is definitely the potential for permanent damage.”

Based on the findings, between five and seven per cent of Albertans will develop a kidney stone in their lifetime, says Alexander. The data are more alarming in the United States, where 10 to 11 per cent of the population develops kidney stones. Half of those who get kidney stones will have a reoccurrence—anywhere from one to several episodes.

“It’s important to note that the vast majority of people with kidney stones won’t develop permanent kidney damage,” adds Tonelli. “But a few will, and that’s why it’s important for people with stones to get proper followup care—to reduce their risk of another stone, and to detect kidney damage if it has occurred.”

People could try to decrease their likelihood of developing kidney stones by decreasing their sodium intake, drinking more water and, if needed, taking certain medication. Research has previously shown that the kidneys of people who develop kidney stones don’t function at optimal levels, which is a factor in the whole issue.

The primary funders of the research were The Kidney Foundation of Canada, Alberta Innovates – Health Solutions, the University Hospital Foundation and the KRESCENT program, a training and support program for kidney-research scientists.

“We are proud to support outstanding and innovative research that helps us to improve our understanding of the possible risk factors for developing kidney failure,” said Wim Wolfs, national director of research with The Kidney Foundation of Canada.

Other funding organizations were equally pleased with the research findings.

“We are deeply grateful for the tremendous community support that allows the University Hospital Foundation to support innovative research; to provide the seed funding required to pursue new and emerging fields of study,” said Joyce Mallman Law, president of the University Hospital Foundation. “Todd Alexander and Marcello Tonelli’s research is a tremendous example of the power of philanthropy to change and save lives by building new knowledge to treat and prevent disease.”