Kidney stones may be warning sign for heart health

Young women with history of kidney stones may be at higher risk for stroke and heart attack, UAlberta study shows. 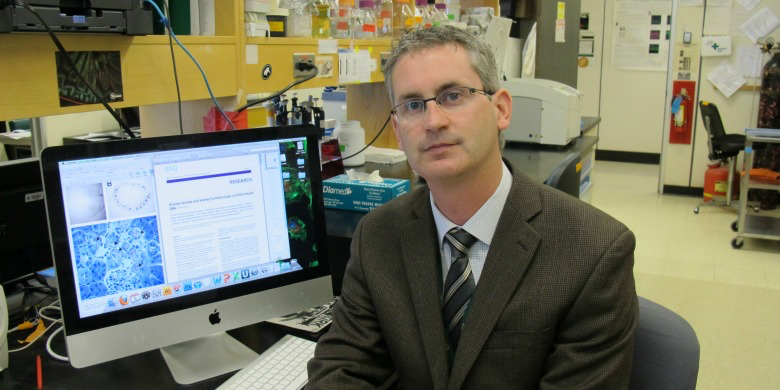 Todd Alexander led a study that revealed a link between kidney stones and heart problems, particularly for young women.

A new study from University of Alberta researchers suggests that patients, particularly women, with a history of kidney stones may be at a higher risk for stroke and heart attack.

The study, published in the Clinical Journal of the American Society of Nephrology, was led by Todd Alexander, associate professor of pediatrics and adjunct professor of physiology in the Faculty of Medicine & Dentistry.

The researchers analyzed information over 12 years from more than three million Canadian patients over the age of 18. Alexander compared the prevalence of heart attacks, stoke and artery bypass surgeries in patients who had a kidney stone with that among the rest of the population. Results showed that patients who had at least one kidney stone were significantly more likely to experience heart attack, stroke or artery bypass surgeries, regardless of age or other illness.

Women were particularly vulnerable: young women with a history of kidney stones were three times more likely to experience a heart-related complication.

“We were able to show that people who had kidney stones were more likely to get acute myocardial infarction [heart attacks], strokes and revascularization procedures,” Alexander said.

The link may be life-altering for patients with a history of kidney stones because it offers an early indication that they should pay close attention to their heart health. High blood pressure is strongly tied to heart-related illnesses but, unless it has been previously diagnosed by a physician, patients are often unaware they have the condition. Kidney stones, on the other hand, are painful and require immediate medical attention.

“We call hypertension the silent killer,” Alexander explained. “You’re not aware you’re hypertensive. Kidney stones are different; you’re very aware you have a kidney stone. This is potentially a mechanism for one to be identified earlier for screening.”

By being screened earlier, patients will be better equipped to control health indicators like blood pressure and cholesterol levels. This benefits the patient’s health and eases cost to the health-care system for emergency procedures.

To reduce risk of developing kidney stones, physicians recommend drinking plenty of water, limiting salt intake, limiting soda intake and getting plenty of calcium. But can these habits potentially ward off a stroke or heart attack?

“I would like to think they do, but it’s not known,” Alexander said. “I don’t think it’s going to hurt. Less sodium will decrease your blood pressure and likely decrease your cardiovascular risk.

Alexander now hopes to confirm that the association between kidney stones and heart disease is causal. Pending the results of the secondary study, he would like to investigate whether expelling more calcium through urine decreases the cardiovascular risk.

Kidney stones may be warning sign for heart health
Newsroom