Ten-day camp challenges students in Gwich’in community to live on the land while earning high-school and university course credits. 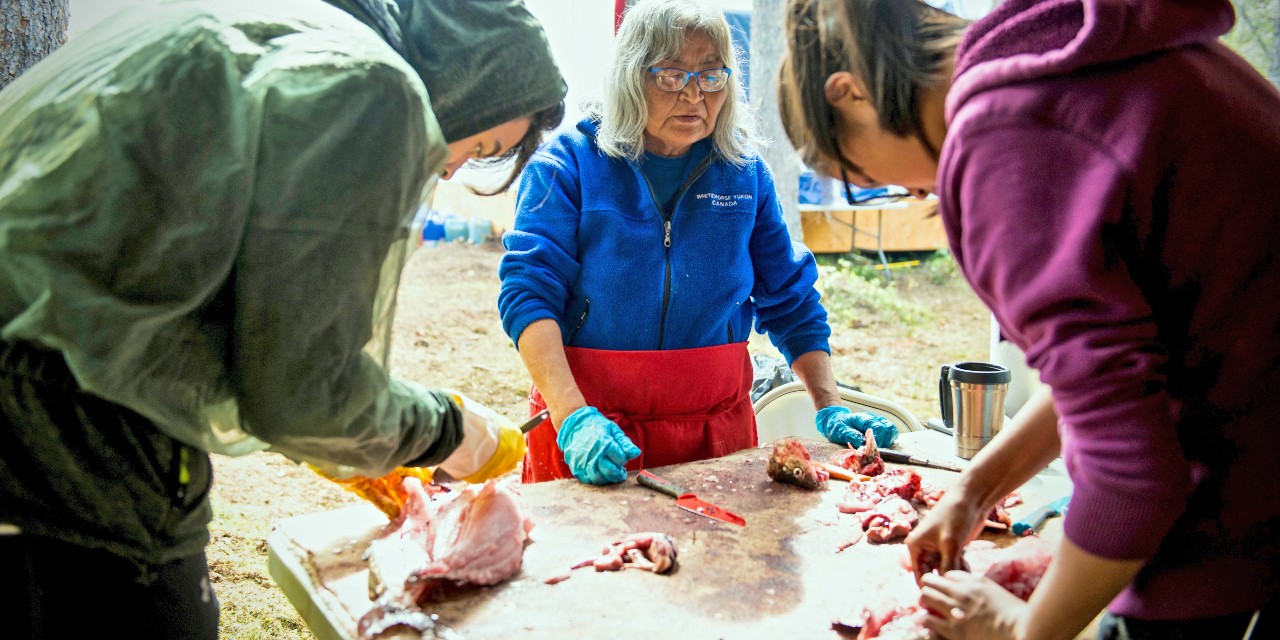 Teetl'it Gwich'in Elder Bernice Francis (centre) shows students Kristopher Colin (left) and Maleanah Alexie how to clean and dry fish at the Ganahghootr'onatan land camp. The camp on the Peel River near Fort McPherson, N.W.T., challenges students to live on the land for 10 days while earning both high-school and university credits. (Photo: Shayla Snowshoe)

When 17-year-old Kristopher Colin heard about the opportunity to earn university credits while participating in a fish camp near his home community of Fort McPherson, he knew he couldn’t pass it up.

“[Land-based learning] is important for us, culturally. It gives us a base for our cultural identity,” he said. “It helps us find and strengthen that.”

Members of the University of Alberta’s Faculty of Native Studies worked closely with Fort McPherson community leadership, Chief Julius School and local elders to develop a camp that met the community’s needs. The 10-day Ganahghootr'onatan land camp on the Peel River hosted Colin and three other students from the school in the Northwest Territories.

The students were taught an introductory course—on Gwich’in governance, focusing on food sovereignty, decolonization and Gwich’in leadership, and issues around climate change—that earned them dual credits at the high school and university level.

“The focus is creating a pathway opportunity for students from that particular region in the North to hopefully go to university,” said Elaine Alexie, northern community engagement officer with the Faculty of Native Studies, who led the camp with professor Adam Gaudry.

Along with their academic work, students participated in the life of the camp, including setting it up, learning about the use of traditional medicines, setting, checking and cleaning fish nets, hauling water, and cleaning and drying fish.

“It was one of those things where in addition to all of the school work, there was the camp work, too. It was nice to switch between the intellectual learning and the physical learning, though it was physically demanding,” said Gaudry.

Getting out of the classroom and onto the land can reveal students’ abilities, said Gladys Alexie, an instructor at Chief Julius School who taught a course on legends and cultural teachings at the camp.

“It’s beneficial to the ones that struggle in the classroom but are eager participants on the land. They may struggle with school work, but then you go one-on-one and do oral work and they're excellent students,” she said.

But for many participants, the physical aspect had the steepest learning curve.

“The first few days were very miserable and hard,” said Colin. “We had to set up camp and work and while we were doing work, the mosquitoes were so frustrating. Plus, around that time of the summer it’s 24-hour sunlight, so it’s hard to sleep for some people.”

However, Colin said, once students got used to the challenges, it was precisely those challenges that made the experience worth it.

“It’s really hard to be out there, you need to be prepared. But it makes you physically and mentally stronger,” Colin said.

“Going through 10 days of being challenged every day increases your resilience so much.”

Gladys Alexie also saw that impact on the students.

“Land-based learning helps the students as they go on in life; they’re able to say, ‘I’m capable of doing this, I know I can, I know everyone in the community is behind me and they encourage me,’” she said.

The project first began in 2016, when the university hosted the Building Reconciliation Forum. First Nations, Métis and Inuit leaders from all over Canada travelled to Edmonton to discuss post-secondary institutions’ responses to the Truth and Reconciliation Commission Calls to Action.

Leaders from Fort McPherson met with officials from the Faculty of Native Studies to find ways for the two groups to collaborate.

“The initial idea came from the community,” said Elaine Alexie. “We asked what the community would like to see, and they said a community camp. And that’s where it all started.”

The group secured funding from the Kule Institute for Advanced Study and the provost’s office, and in early summer 2019 built the physical structures of the land camp.

“This camp is not a university camp, it’s not a Faculty of Native Studies camp, we just helped facilitate it,” Alexie said.

“This is a community camp that is going to be used whenever the school wants to. If they want to do other land-based learning throughout the year, it’s going to be there.”