Landing a dream job in McMarketing

Luke Melenberg was chosen from a nationwide pool for McDonald's Canada's summer marketing internship. Now he's off to Toronto to find success under the Golden Arches. 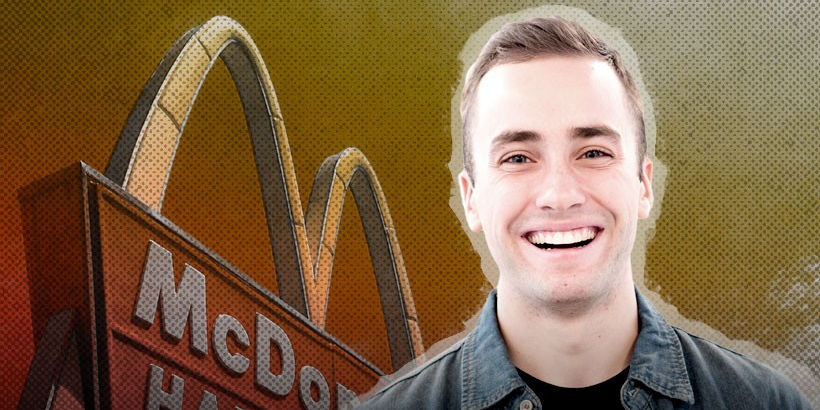 For many students, a fast-food job is an early rite of passage. Countless teens have memories taking orders and flipping burgers at their local McDonald’s. But Luke Melenberg is taking a different path; this summer, he’s capping the third year of his School of Business BCom program with a marketing internship at the Golden Arches.

Melenberg landed his new gig when he competed last month as a finalist in this year’s Canada’s Next Top Ad Exec (CNTAE) competition with teammate Geoff Wong. The two were selected from a nationwide pool of more than 200 teams and competed in Toronto for the coveted prize. Together, Melenberg and Wong ultimately placed second overall—no small feat on its own.

Now in its tenth year, Canada’s Next Top Ad Exec was founded by McMaster University’s DeGroote School of Business, and annually hosts students from across Canada to compete for the coveted title. But Melenberg says that case competitions are about more than just winning, and are a means to an end that enable business students like him to network and find valuable career prospects. Judging panels are composed of executives from some of the nation’s largest companies, including PepsiCo, Canadian Tire and, yes, McDonald’s. During his time in Toronto, Melenberg had the opportunity to interview with all three, and says he instantly connected with Chuck Coolen, senior marketing manager of McDonald’s Canada.

In the interview, Coolen asked him to share examples of effective marketing campaigns relevant to the restaurant chain. Having done his homework well in advance, Melenberg spoke to the recent success of McDonald’s McCafé line, explaining how the fast-food giant has managed to carve out a substantial niche in a notoriously difficult-to-penetrate market.

“Before 2010, McDonald’s wasn’t in the coffee market. Five, six years ago, they decided to go into the coffee market. But the thing is that people have routines. McDonald’s has to add the McCafé into people’s considerations for coffee. And that’s a struggle—especially with coffee, which people are very particular about,” explains Melenberg.

“For a whole week at the beginning of March, McDonald’s gives away their coffee for free. It’s always planned right at the kickoff of Tim Hortons’ Roll Up the Rim. What that does is get people into the restaurant. Ultimately, [the coffees] are loss leaders, but that’s not the point. They can take a loss, but so long as they’re adding McCafé to that consideration set, it’s smart.”

He also tied coffee marketing to a business that’s closer to home, explaining how he thinks HUB Mall staple Cookies by George “owns the student population” through loyalty, recognition and stellar customer service. While using such a local example was a big risk when pitching to a national retailer, Melenberg says the panel was impressed enough by his boldness and savvy to choose him as the only candidate selected for the McDonald’s internship at their office in Toronto.

The move isn’t something he’s taking lightly; it’ll be the first time the 20-year-old student will be living away from home. Luckily, he’s already found accommodation through family friends, and says he’s more intimidated by the idea of making an impact—but that just motivates him further.

“That first month is where I’m most afraid. Because I don’t know the team. They know each other very well. So you’ve got to find a way to fit in, but also, because you’re working to a standard,” he says, explaining how this will drive him to stand out. “The way I work personally is I never do anything I know I can’t complete. I like doing things that scare me, but if I’m gonna do something that scares me, I want to crush it.”

While he’s excited about what this opportunity will bring, Melenberg acknowledges he couldn’t have made it this far on his own. Citing School of Business professors Sharon Bell and Webb Dussome as some of his biggest influences, he offers sage advice to fellow students hoping to find the same kind of success he has:

“What I’ve found in my last two years of university is just reaching out to people in your faculty and just asking if they’ve got the time can go a long way. Despite the fact that we’re students who think we can do it all on our own, realizing you’re surrounded by people who know a lot more than you can go a long way.”

It’s been a whirlwind semester for Melenberg, who went straight into final exams after returning from CNTAE, and is Toronto-bound immediately afterwards. He’ll spend the next four months in his internship, only to return—hopefully—to Edmonton to complete his final year, all while serving as the captain of the 2017 JDC West conference. This breakneck pace is enough to make anyone’s head spin, but Melenberg knows that he’s getting the chance to become a better marketer every step of the way.

“Marketing is business strategy. How do you beat the next guy? It’s a means to an end.”

Landing a dream job in McMarketing